Okay, so not really.  But, if it was physically possible to fit all 950some of you into Edgemoor Art Studio, I totally would have.  However, since I can’t, I wanted to share a little of my son’s birthday party.

I’ve worked with Ruth, the owner of Edgemoor, quite a bit since my first article on the studio.  However, for full disclosure, I pay for my son’s art lessons and paid for his birthday party, at the same price everyone else does.  Which, FYI, is a ridiculously awesome price, but we’ll get to that in a second.

Birthday parties at Edgemoor start with the theme of your child’s choice.  My son wanted a jungle theme, and he and Ruth spent about 10 minutes discussing what that meant.  The day of the party I was asked to come 30 minutes early to put out my snacks (you can bring whatever you’d like) and make sure that I was “happy with the decorations”. 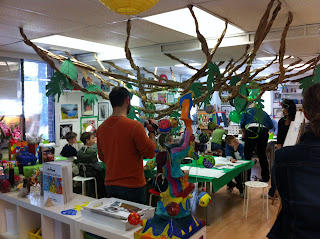 Why, yes, I do think that transforming your entire studio into a jungle will do quite nicely for making me and the kiddo happy.  SERIOUSLY? (And, no, it’s not just us.  A few weeks ago the studio was covered in black and stars and planets and a few weeks before that there was a red carpet and manequins….these parties are all-out) 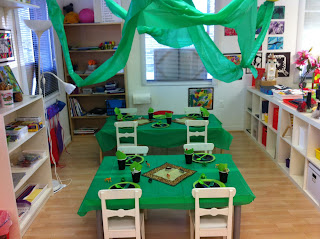 Eating area.  With matching jungle-print plates and cups and jungle animals on the table.  Y’all, I didn’t do ANY of this, it was just magically there.  I seriously showed up with mini pumpkin pies (my Turkey Day Baby does not like cupcakes) and party favors. 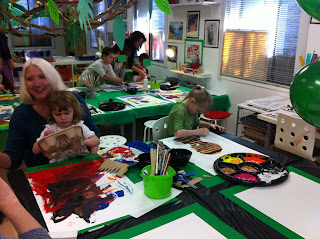 Please do not pay attention to the picture in front of my 3 year old 🙂 We had a lovely lesson on finding the shapes in animals and each child was invited to make their own jungle image.  My baby went with some very contemporary interpretations 😉 the older kids made some amazing masterpieces.  We were supposed to do a special keepsake photo project, too, but I am a horrible mother who’s currently in a fight with a store that rhymes with Binkos DedHex.  That’s all I’m saying. 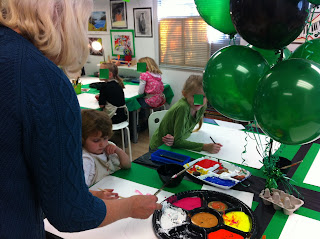 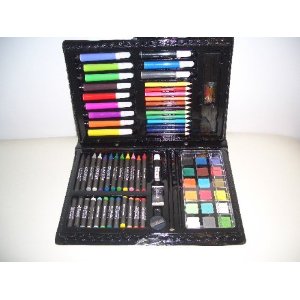 We also learned about mixing colors, double loading the brush, and more.  The kids had a great time and on their way out, several of them said it was the coolest party, EVER.  Aside from the snacks, the only other thing we brought was the “goodie bag”, which we actually got these, but from Michael’s on sale of the week, so they were $5 each.  I consider that an awesome deal for goodie bags, you can spend major cash on all the junk that normally goes in them! Plus, these looked super cool 🙂

The best part? This kickin birthday party was $200.  Seriously.  Read it again, I’ll wait.
Did that sink in?
We’ve had parties a lot of places. None of them have customized, decorated, or engaged with the kids the way that this one did.  With goodie bags and food I spent a total of $310, and that easily could’ve been less if I wasn’t lazy and bought everything pre-made.
We had a great time at our “Arty Party” and I think your child would, too!