What To Do During a Frankenstorm, Day 1

As of right now, it’s not so bad out there.  Better safe than sorry, of course, but that fans that you’re probably at home with some kiddos who need some entertainment.  While TV and video games are definitely an option, here’s a few fun plans to try, too.

My kids spent the night with PwcGrammy on Saturday night so that we could go to a Halloween party.  Being the awesome grandma that she is, she had a whole night of fun planned for the kids including pumpkin carving, seed roasting, caramel apple making, and crafting.  I thought the crafts were adorable, and could be adapted to use what you have at home (or you could pop out to Walmart before the wind gets bad, but that’s a personal judgement call). 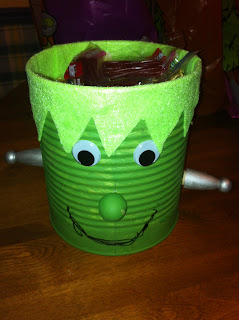 Alright, he’s really supposed to be Frankenstein, but it’s kinda funny to call him Frankenstorm 🙂 This one is made with a #10 (Food Service Size) can painted green.  The “knobs” are wooden pieces that were painted silver.  You could just as easily use game pieces that have lost their home or empty prescription bottles.  Don’t have silver paint? Glitter would work, too.  The smile is sharpie marker, the nose is another painted wooden piece, but you could substitute for a button or draw the nose, too.  The hair is sparkle felt cut to be pointed on one side and folded over the top of the can, but you could easily swap that out for construction paper if that’s what you have at home! 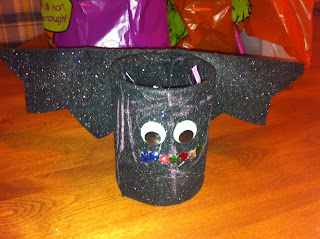 This little guy is also made from a can, but this time it’s standard soup-can size.  (I don’t think I mentioned this on Frankencan, but obviously you’re going to want to wash your can thoroughly and dry it well before starting). Our bad is covered with glitter felt, but you could use black paint or black construction paper.  The smile is made of tiny jewels, but you could use pony beads or crayon.  I think googly-eyes should be a household staple if you have kids, but you could also do the eyes in paint or crayon.  My 4 year old made this craft, so you can see she added lots of pink using a crayon or chalk, and both showed up well on the black felt.  For the wings, use a black pipe cleaner (or you could use a wooden skewer, pencil, or other straight object) and roll it under a piece of cut felt or construction paper and then glue the wings to the back of your can. 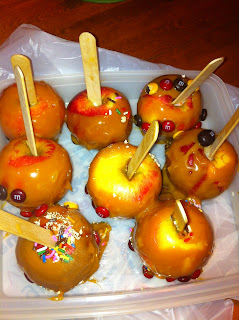 We’ve always got apples in our fruit drawer.  That used to be because they were a cheap fruit option, but I refuse to say that about anything that’s almost $2 a pound, so I guess it’s just a habit at this point.  If you don’t have craft sticks, you can use a turning fork to dunk your apples in caramel and then cut them into wedges after they dry.  If you still want the stick, use a toothpick on the wedges you cut.  Caramels are super easy to melt following the package directions, or, if you are a baker and keep the ingredients on hand, you can make your own caramel:
1 cup butter
2 cups granulated sugar
1 1/2 cups corn syrup
2 cups heavy cream
1 tsp vanilla extract
In a large pot, combine butter, sugar, corn syrup and 1 cup heavy cream. Heat mixture to a boil just over medium heat stirring frequently. Once it boils, stir the other one cup heavy cream. Then without stirring, bring mixture to exactly 239 degrees then immediately remove from heat and stir in vanilla. Allow to cool 10-15 minutes before dipping apples.
The kids decorated their apples with fall M&Ms and sprinkles, but if you really want to go all-out, melt a couple of Hershey bars or chocolate chips in the microwave (30 seconds at a time, stirring frequently) and after you dip your apples in caramel, dip them in chocolate and then add your decorations.  Yum!

Also, you can engage your kids in some fun learning online about the storm! Try the Weather Channel for Kids or Oklahoma News 9s Interactive Weather Tracker, which even offers streaming video.

Stay Safe and Have Fun!! (And no matter how bad it gets, don’t bring out Monopoly! That never ends without a fight!)