So, I have this crazy idea.  Typically my best ideas are my crazy ones.  I want to take my kids to all 50 United States before they graduate.  This was all inspired by a Pinterest find, a quilt made of state t-shirts.  That’s what I want to send them off to college with.  Riley, my oldest, is 9, so I have to shake a leg. 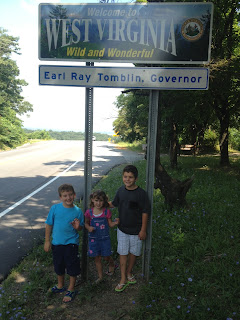 Over this last week, my mom was attending a family reunion in Wisconsin, and wanted to take the kids.  Originally, my dad was going to go, but he ended up being unable to attend, so I decided that I would go since it was going to be a massive drive for one adult alone.  I couldn’t drive, but I could help with the kids, so we packed up and off we went.  Our first stop was West Virginia.  Not much of a drive, but it got us started.  My godmother lives in West Virginia, so we were excited to have a visit with her!  Originally, we were hoping to go with River Riders on a tube trip down the river.  We’ve used them before for White Water Rafting, but right now, tubing is way more my speed- especially with the munchkins! Unfortunately, the recent rain made the water level too high, and they were only allowing ages 12+ on the water.  Boo. 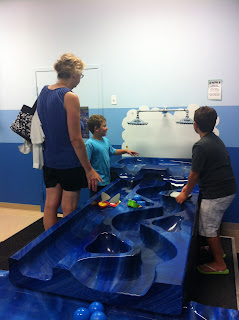 Aunt Beth, my godmother, took us to JayDee’s Family Fun Center (2332 Henshaw Road, Inwood, WV) to go to their indoor “Nature Center”.  I wasn’t really sure what to expect, but it was awesome!  For $5 admission, we really got a great deal!  The Nature Center is really more of a children’s museum and it’s got several rooms, each with a theme.  There was wind and water, which had hoses and a water table to play with and explore, see above. 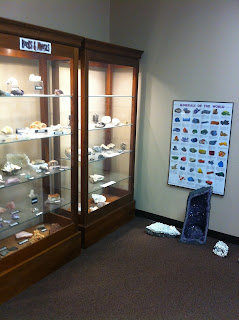 In another room, there were minerals and rocks, another had rainbows and mirrors that distorted your view so show the power of light, still another room had oceans, there was a farm you could “plant” and “pick”, and there were animals and bugs displayed, too! 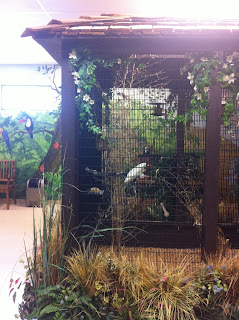 The final room had live animals, including birds and lizards.  Two of the birds will even talk to you.  The kids had an amazing time, and every room had hands-on components.  It was a great deal for a clean, well-kept children’s museum! I know they called it a nature center, and I can see that title, but it was really very children’s museum-esque and we would actually drive out again to go- maybe as a homeschool field trip later this year! 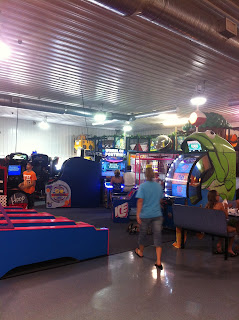 One of the reasons I never would have expected such a great experience was that JayDee’s is really like an extreme House of Mouse (you know what I’m talking about!!).  When you first walk in, you’re inside an arcade and there’s a cafe selling pizza and other food. 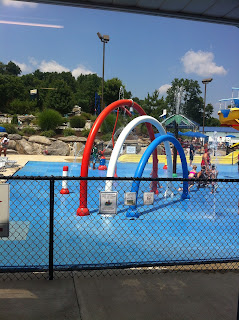 Outside the back door, there’s a waterpark.  Slides, a splash zone, and lots of people having fun! Also out the back door, there’s putt-putt golf, a batting cage, and a small train that will take you up to a “mine” so you can pan for gemstones.  My middle child, Logan, is a nut for gemstones and keeps a collection, so I ponied up for the large $9 bags of gemstones and dirt and away we went.  The Nature Center closes earlier than the rest of the facility, so we had to be done there in only an hour, and could have easily spent two or three there. 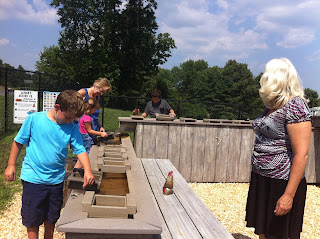 After a train ride through the parking lot, the kids got to “pan for gold”, shaking their gemstone bags into the screen-lined boxes and then lowering them into the water. We’ve done this before at Cox Farms, but the kids LOVE it, and are always so excited to get to do it, anyway.

After JayDees, we headed to check out Despicable Me 2, which I think I already mentioned on Facebook was a HUGE win with my kids.  Savannah is 5 and she enjoyed it, but not as much as Logan (7) and Riley (9) who were almost rolling in the aisles.  Even the three adults really enjoyed the storyline, which has a bit of a love story to it.  Definite win!