Last week I was able to go and check out the Washington Auto Show which is at the Washington Convention Center (opening Tuesday 1/26 due to snow through 1/31).  I was able to sit in on lots of talks about new technology that will offer greener options and cooler features, but what I really want to feature for you guys is what your kids might like at the Auto Show, because, well, that’s what you come here for, isn’t it?

Tickets start at $12 for adults and $5 for children (VIP options are also available) and you can (and in my opinion should) take the yellow line metro to the convention center- you walk right out of the metro station into the convention center.  There is parking, as well, but metro was easy and for one person was cheaper than parking.  Your call 🙂

On display are lots of luxury cars, concept cars, and historic vehicles that I think kids would really enjoy.  On the bottom floor, there’s an electric “Hello Kitty” car, as well as Camp Jeep, which you can ride in if you’re 44 inches or taller.  I was able to snag some video of that, which you can re-watch on periscope here:
https://katch.me/PwcMoms/v/c756b942-5e56-3fbf-8b9e-1808c0eb0c55

There’s also a kids area downstairs.  It wasn’t ready to go when I was there, but it looks like they’ll definitely have some space for them to sit and chill, it’s near Kia and the bathrooms, so well played there 🙂 I heard rumors of a moon bounce, but I can neither confirm nor deny that. There is a classic cars section downstairs, too, which my kids really like looking at.

Upstairs there were some neat concept cars and some “cool” cars that I think kids would really like.  “Race cars” like Alfa Romeo, Corvettes, and more, as well as a Hydrogen concept Delorean from Back to the Future, and a Toyota simulator where you get to wear goggles and be driven around by a test dummy. 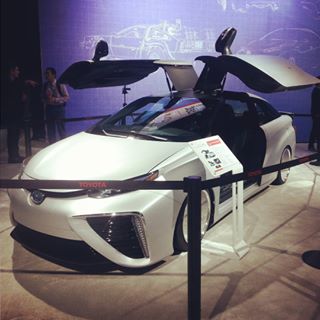 At the end of the day, if you have a car enthusiast, there’s a lot for them to look at.  If the adults in your family want to go, you can definitely bring the kids along and keep them busy.  If you’re going specifically for the kids, I would say 5+ because there is a TON of walking, and I would imagine on a Saturday or Sunday when most of you would go that there would be some waiting in line involved.  If you’re bringing younger kids, I would definitely bring the stroller or backpack so that they can take a break if they need to.  If you’re off during the snow and looking for something to do, you might be able to hit the show without a crowd and just enjoy your favorite cars!

Of course there’s also a lot for grown ups to check out, too, and if you’re in the market for a new car or you’re interested in the advances in technology, especially where fuel alternatives are concerned, you’ll enjoy the show.