Hey, guys! It’s Kristina.  The Governor has announced an initiative to try to get more children adopted out of VA Foster Care.  You can find more information on the “Virginia Adopts” program on their website.  Did you know that 50% of kids who leave foster care without a family will be homeless within two years or that 94% of Foster Youth won’t graduate from college?

There’s a story in every family: some families begin with moving to a new home, some have chapters focus on overcoming seemingly insurmountable odds, and still others are laced with whimsy and fun.  Our family’s story has a little of all of that, but, at its core, our family is a love story.

When my daughter was small someone asked her about the make up of our family.  With child-like innocence and honesty, she told them, “We’re like a twisty cone.  I’m chocolate and my parents are vanilla.  We’re twisted together onto one cone and that’s our family.”  We’re a trans-racial adoptive family, which is a fancy way of saying that we adopted children of a race other than our own.  When Rachel, our daughter, was three, she called us a ‘Choconilla’ Family.

Most parents have nine months to prepare for the arrival of their first child.  My husband and I heard we were “expecting” over lunch and by dinner a three-year-old girl and a 22-month-old boy, Rachel and Nicholas, were bounding down our driveway and into our hearts.  We were suddenly foster parents to two adorable and rambunctious children.

Be it fostering, adopting, or expecting, no one is ever really prepared the first time someone hands you a child and declares that you are solely responsible for its care, feeding, and safety.  That first night, we called our friends with kids and asked, “What should we feed them?  What is an appropriate bedtime?  What size diaper does a toddler wear?”  In other words, we were pretty typical first time parents.
After a few weeks, we felt like we were getting the swing of things, which meant that it was obviously time for a curve ball.  I found out that I was pregnant.  We had gone from no children to expecting our third in under a month.  If the existence of the platypus hadn’t convinced me of it before, I was then certain that God had a very highly tuned sense of humor.
Ten years, four kids, and a pug later, we can look back through the haze of sleepless nights combined with active days and marvel at the start of what became our family.  We adopted Rachel and Nicholas, added two bio-babies, Jack and Teddy, to the mix, and life’s been one great adventure ever since.

Like every family, we’ve had our challenges.  If I had a nickel for every time I was asked, “What country did you adopt them from?” I could retire in luxury.  I’ve gotten used to the look of surprise that I get when I tell people that we adopted from the foster care system, but it still breaks my heart a little each and every time.  All too often, children in foster care are seen as second-class, broken, or something to be avoided.  We had well-meaning, but woefully misinformed people warn us that taking in foster children would lead to any number of horrible things based mostly on what they seen on a made-for-tv movie.  When we took in children of a different race, we heard ugly comments about our children being happier “with their own kind” or questions as to whether a parent could truly love a child that didn’t look like them.  Ignorance can be a very unseemly thing.

The other comment that I hear a lot is “These children are so lucky to have you.”  The funny thing is that it is the exact opposite.  We are so blessed to have them in our lives.  They are bright, funny, imaginative, talented, inquisitive, and being their mother has made me grow in ways that I couldn’t even imagine before they walked into our lives.  It was not a sacrifice to add them to our family; it was a gift.  I look back now and realize that there was a place reserved for them in my heart that I didn’t know was empty until they each stepped in and filled it.  They are my children.
Our family is like a twisted up cone, sometimes the flavor is Rocky Road, sometimes it is Cherries Jubilee, and sometimes the whole thing is rolled in a rainbow of colored sprinkles.  It doesn’t matter the color, the flavor, or where it came from; we all sit side by side in the crazy banana split of life, sprinkled with nuts, a whole made better by its different parts.

If you’ve ever considered adding to your family through adoption, visit www.virginiaadopts.virginia.gov to get more information about Gov. McDonnell’s new initiative “Campaign for 1,000” with a goal of matching a thousand families with the thousand children eligible for adoption in Virginia’s foster care system.  It could be the best decision you’ve ever made.  It certainly was for us. 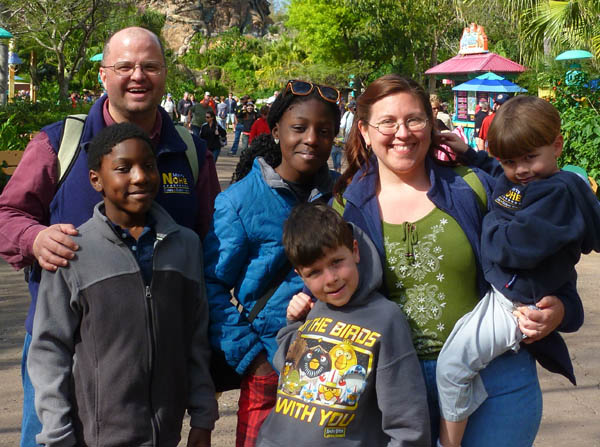 Kristina Nohe is the mom to four fabulous children. When she isn’t
driving them around to their various activities, she is homeschooling
them and cooking Gluten-Free food. She is a former Navy brat who has
lived all over the United States, but can’t think of any place else
she’d rather raise her children than Prince William County, Virginia.