Co-Commissioned by Marionetas de la Esquina and the Kennedy Center

(WASHINGTON, D.C.)—The Kennedy Center presents the U.S. premiere production of
Sleeping Beauty Dreams in the Family Theater from February 16 – 17, 2013. Co-
commissioned with puppet theater company Marionetas de la Esquina of Mexico, the play is
written by award-winning playwright Amaranta Leyva and directed by Lourdes Pérez Gay.
Sleeping Beauty Dreams is recommended for ages five and up. The performance on Saturday, February 16
at 11:00 a.m. will be held in Spanish.

Sleeping Beauty Dreams reimagines the famous princess as an overprotected daughter
looking for a way to break free of her castle walls in order to search for true love…and her true
self. A contemporary look at this classic tale, Marionetas de la Esquina’s humorous storytelling and whimsical puppetry awake this sleeping princess as never before. 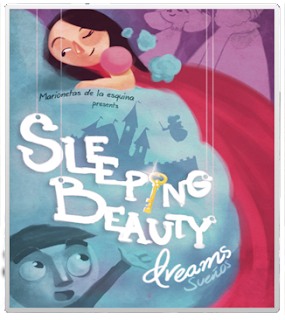 In 2004, the company was recognized by
CONACULTA and included in the program México en Escena (Mexico on Stage), a program
that supports experienced and renowned groups. In 2006, company member and playwright
Amaranta Leyva received the Mexican National Prize for Children’s Theater for her play the
dress. Also, in 2006 the company was awarded by the National Critics of Mexico. The
company’s history has been published in a book called Marionetas de la Esquina, Tras
Bambalinas (FONCA, Cal y Arena, México, 2004) (“Marionetas de la Esquina, behind the
scene”).

Lucio Espíndola (Founder). Author, actor, director, puppeteer, and puppet-maker, Lucio
Espíndola has dedicated himself to the production, exhibition, teaching and diffusion of the art of
puppetry since 1973. He has written 13 plays, built more than 400 puppets, and has acted in
approximately 10,000 performances.