“The Watson’s Go To Birmingham”

Set your DVR’s for a special treat on the
Hallmark Channel, as a part of the new Friday night “Walden Family Theatre”
series.  The beloved book “The
Watson’s Go To Birmingham” comes to life on the screen, this Friday, 9/20,
8 PM (ET/PT) with a talented cast, starring Tony® Award winner and Grammy® Award
nominee Anika Noni Rose (“The Good Wife,” “Dreamgirls,” “The Princess and the
Frog”).  Also starring are three-time
Tony® Award nominee and Grammy® Award nominee David Alan Grier (“Porgy and
Bess,” “PEEPLES,” “In Living Color”), Skai Jackson (“Jessie”),
Wood Harris (“The Wire,” “Remember The Titans”), LaTanya Richardson Jackson
(“The Fighting Temptations”), Pauletta Washington (“Beloved”), Bryce Clyde
Jenkins (“Easy A,” “Have A Little Faith”) and Harrison Knight (“We the Party”).

Tonik Productions is one of the many companies responsible
for bringing this project to fruition.   Nikki Silver is an
Emmy® Award- winning producer and chief creator of ToniK Productions. Tonya Lee
Lewis has partnered with Nikki Silver to form this production company.  Nikki Silver has been persistent in her
efforts to see the book, The Watson’s Go
To Birmingham, written by Christopher Paul Curtis, published by Random
House Children’s Books, come alive on the screen.
“The Watsons Go To Birmingham” is presented by ARC Entertainment,
Walden Media, Walmart and Procter & Gamble and is a ToniK Production. Louis
J. Grieci III, Ben Simon, Janet M. Morrison, Aaron Tucker, Jim Bechtold, Trevor
Drinkwater, Brad Liebow and Brian Wells serve as executive producers and Philip
Kleinbart, Nikki Silver and Tonya Lewis Lee serve as producers.  Tonya Lewis Lee, Stephen Glantz and Caliope Brattlestreet
wrote the teleplay and Kenny Leon is the director. 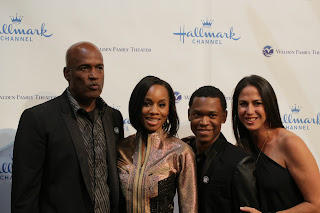 Photo Left to Right: Kenny
Leon, Anika Noni Rose, Harrison Knight, Nikki Silver
According to
director, Kenny Leon, “The Watson’s Go To Birmingham” is “a love story, a
family story, that the whole family can sit down and watch and do that one
thing together.  Laugh together, think
together, even shed a tear together but this movie is all about family and all
about love, just what the Hallmark channel represents.” 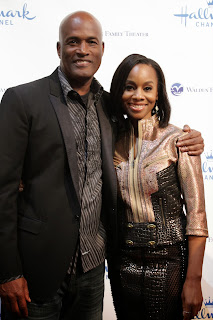 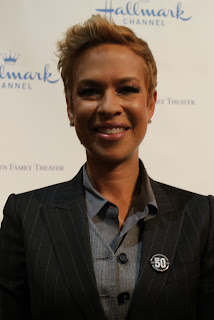 Photo: Kenny Leon and Anika Noni Rose Photo: Tonya Lewis Lee
On Tuesday
evening, I attended the Red Carpet Washington DC premiere of this film at the
Newseum, as part of the press for PWC Moms. Honorable William A. Bell, Sr.,
Mayor of Birmingham, Alabama, where the majority of the movie takes place, also
attended this amazing event.  The Mayor
of Birmingham brought artifacts from this historic time
in Birmingham to the event for a temporary display that evening.  The
artifacts included: Pews from the16th St. Baptist Church; a segregated lunch
counter; a segregated water fountain; mug shots of people arrested after the e
Children’s Crusade march and shrapnel from the church bombing.  The artifacts brought you back to a time in
history where there was a movement for equal rights and for humanity.
The film takes
place in 1963, upon the anniversary of life changing events during the civil
right movement.  As children, we are
taught facts about this era of time but this movie brings in the human spirit
through the eyes of an 12 year old African American child experiencing racism
firsthand in Birmingham, Alabama. 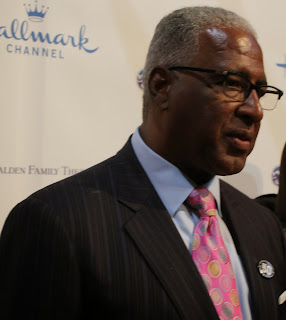 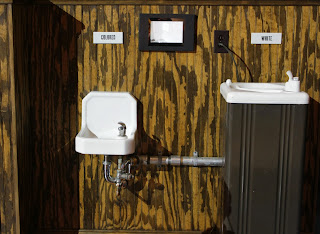 Photo of
Honorable William A. Bell, Sr., Mayor of Birmingham, AL, and a photo of
segregated water fountains
This is a movie
that every family in America should watch as it portrays so accurately what it
would be like to experience racism and bullying during the civil rights
movement in the South.  Tonya Lee Lewis
states “The Watson’s Go To Birmingham” is about a Northern family that travels
to Birmingham and experiences racism, up close and personal, during the summer
of 1963.”  During the film, the family
comes closer together and overcomes fear and develops courage to stand up for
what is right.
Through the eyes
of a “tween” who attended the screening, Amada, 12 years old, believes that “kids should watch this film because they will take away the
important message that it’s important to understand our history so that it will
not ever be repeated again.”
When I asked
the director, Kenny Leon, what questions we should be asking our kids when we
watch this movie together he stated these two crucial questions “Do you know
what racism is?” Do you know what bullying is?” He said, as a parent, we must
discuss with our kids the events that took place during 1963 and discuss the
injustice at that time but also remind them of the good people in the world who
influence positive changes.  He said that
“Ultimately, Love Wins!”
The
performances of the cast are stellar and especially noteworthy is Bryce Clyde
Jenkin’s performance of 12 year old Kenny Watson.  By the end of the movie, you will have
laughed, cried and experience critical thinking about the civil rights
movement.  This movie will speak
meaningful conversations between families.
If you miss
the world premiere of “The Watsons Go To Birmingham” on the Hallmark channel on
Friday, 9/20/13, the movie will also
encores on 9/27/13 and 10/11/13, at 8 PM (ET/PT) on Hallmark Channel.  The DVD will be released on September 24th
and it will be sold at Wal-Mart.
For educators, Walden Media has partnered with the Hallmark
Channel and Zaner-Bloser Educational Publishers to create turnkey lessons plans
for grades 4-12 that coincide with the themes and messages explored in this movie.
“The Watsons Go To Birmingham Teacher Guide,”
which will be free of charge on a dedicated Hallmark Channel microsite and the
Walden Media website www.walden.com, encourages active student participation,
while integrating social-emotional learning, literacy, writing and character
education designed to reinforce critical thinking and deep comprehension
skills.
I highly recommend this movie and your
children that are in grade school, junior high and high school.  After the movie, set aside a time to discuss
any questions that your children may have and explore the civil rights themes
presented during “The Watson’s Go To Birmingham.”  I hope your family enjoys watching this film
as much as I did!
____________________________________________________________

This post was written by Amy Fitzgerald, who attended on behalf of PwcMoms.com