Summer Camp at The Little Gym

I love that my kids are old enough now that they get invited to come out and do reviews.  Less work for me.  Especially when the invitation is to come to camp at The Little Gym of Gainesville!

My 7 year old was invited to come out for a day of TLG’s super flexible camp and bring a friend so she’d feel comfortable.  What’s great about these camps is they don’t require a week-long commitment, although you certainly CAN go all week.  They’re also half-day, so for those of you who need to keep the budget in mind, it’s great that you can throw in something fun without spending a few hundred dollars.  Camp prices vary slightly based on if you’re a Little Gym member or not, but our 1/2 day camp would have been $50 as a non-member.  The best part is that since The Little Gym of Gainesville is located on Atlas Walk Way in Virginia Gateway, there’s tons to keep mom busy if you don’t want to go home and take a nap be productive. I got some lunch (Potbelly Veggie Sandwich and Veggie Soup!), checked out Kirklands and Pier One, and even popped into Target! But enough about me, let’s talk more about camp!

So, my very savvy 7 year old, Savvy, brought her friend from preschool who lives in Bristow. 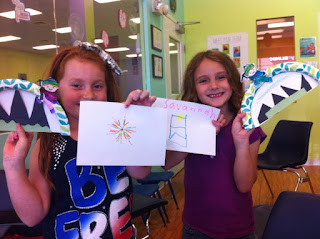 There was a good sized class of kids, and I think they did run the full range of ages that TLG accepts for camp- 3 years through 8 years.  It was a nice mix of kids, and the teachers were highly competent at keeping everyone engaged.  Now these girls are old pros at being dropped off at things, so they ran right on in and started having fun while I finished the paperwork.  Note that even though it’s a one day camp, because of licensing you’ll need a shot record and a birth certificate or passport- so plan on getting copies if you don’t have them already!! 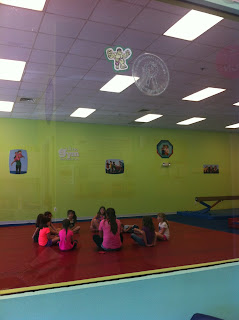 Each week has a theme, and there’s an adventure the kids are going on.  The kids alternate between a structured group activity and free play, taking a break in the middle to get a snack and make a craft or two that go with the theme of the week.  If your child goes all week, the activities will change but the weekly theme stays the same- so they won’t get bored at all. 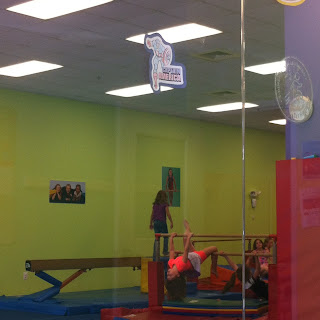 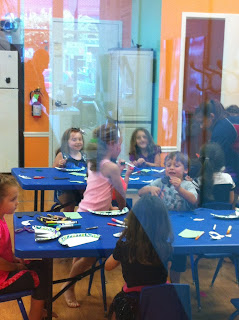 I stayed and watched class for about 45 minutes so I could take pictures and observe how the staff interacted with the kids (I could’ve been at the Starbucks across the street! The sacrifices I make for you people!) which was all great.  I left for about an hour and popped back in to take a few more pictures.  This is in the craft room- Savannah and her friend started hiding under the table and laughing at me trying to take pictures, so this is the best one I got.  They were definitely having fun! 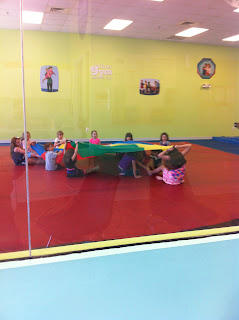 After crafts I popped back out again to do some shopping, and when I came back they were playing with the parachute, climbing the “mountain” and finding the prize at the end of their quest.  When the girls came out, Savannah’s friend threw her arms around me, gave me a big hug, and said “Thank you so much for bringing us here!!” 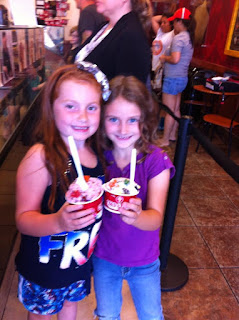 Coldstone was right next door, and I needed to ask the girls some hard-hitting questions, so I figured I’d pry them with some ice cream. 😉

Me: Did you have a favorite part?
S: I liked playing on all the gymnastics stuff.
K: I liked when we made a craft.

Me: Did you have a least favorite part?
S: There was a boy.  He cut in line.
K: Yeah, that boy lifted his shirt up.  No boys!
S: NO BOYS! NO BOYS!
Me: You guys have 4 brother between you!
Girls: That’s why no boys!

Me: K, do you think your school friends would like this camp, too?
K: Yes.
S: I don’t have school friends because I’m homeschooled.  But my brothers are too old to come, so I win!!

From there the conversation kind of fell apart into observations on the fact that they both got pink ice cream (but different colors of pink) and they both got gummy bears mixed in.  While thrilling, I’ll spare you the details 😉

If you’d like to take a little break, The Little Gym camp is perfect for you! Whether you go with Super Kids Quest Camp for ages 3-8 or Grade School Thrill Camp for ages 6-12, TLG Camp is a fun day out for your kid, and a fun bit of quiet time for you!