Submitted by PwcMom Aimee!  Thanks Aimee for reviewing this great family friendly activity at the Prince William Ice Center, and thanks to Riann for the pictures!!

Snow and Story was great fun! $6 per preschooler. They spent about 45 min playing with a ton of toys, tricycles, dump trucks, giant plastic bowling set, pile of snow that was dumped from the ice resurfacer at the start, with shovels and rakes (and the dump truck toys). There were just the right amount of little people, not so many that there were fights over toys, not so few that baby cliques started up. Since dear daughter was along for the trip, and even though the ice was not slick, I did worry about tripping over my baby belly, so I let dear daughter play the role of escort for dear son. 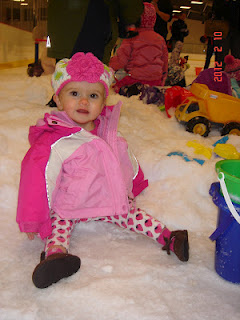 After that, they already had the cafe set up with little place settings of 2 chocolate chip cookies on a napkin, and cups of hot cocoa, just the right temp for teeny tongues. My dear boy showed his sweetness by offering his sissy one of his cookies, I was so proud!!! At that point, she left to go to the other side to get ready for her skating, and we listened to two stories…Brown Bear, Brown Bear, What Do You See? and the Very Busy Spider. It finished up about 2 min after 11. Most of the little folks looked pretty tired after (mine laid down on the bleachers and watched Netflix quietly, which is most unlike him, for the first hour of the open skate). 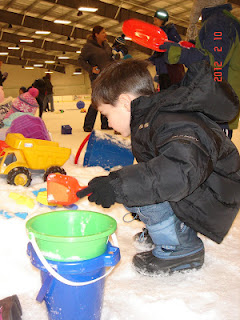 Snow and Story is held occasionally for the public, including February 20th and 27th and on March 5th from 10-11am. It can also be scheduled for groups with at least 10 children.  To reserve your private snow and story, or to register for one of the open Snow and Story sessions, contact
Maureen Brennan at 703-730-8423 or email her.