Growing up, I was a figure skater.

I didn’t start at age 3, wasn’t going to the Olympics, and much to my coach’s dismay, I had hips.

But, I loved skating.  My mom made gorgeous costumes, and I felt beautiful gliding along the ice in a way that I never did on the ground in shoes.  I was so excited to offer my daughter the chance to start skating earlier than I did, since we have  rink near our home, in case she took to it 😉

She did!  Much to our amazement, the first time we took her to skate, she just hopped on the ice and went.  (If you are teaching your child to skate, tell them not to touch you, or the wall, and to lift their knees and march like a soldier.  Works every time.  Also, have them fall down and stand up about 12 times on the ground before you put them on the ice.)  My daughter even demanded a ballet outfit to wear to lessons. 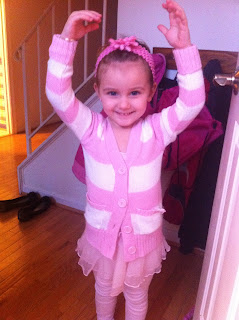 Yeah, I was pretty psyched 🙂 This fantastic outfit was completed with her new skates from Grammy and Papa, but the rink has rental skates available as part of your lesson fees.

The coaches at PWIC are fantastic.  Patient and friendly, they do a great job. My daughter was one of the youngest in her class as she JUST turned 4 before class started, and I think I probably would’ve waited a little longer to start her if I had it to do over, just because she was so interested in watching everyone around her that she didn’t skate as much as she could have.  She was particularly interested in holding hands with another little girl who was typically at the back of the line “so my friend isn’t alone”.  That’s a “my child” problem, though, and not a reflection of the classes.  The older girls who were more used to being in a class setting did a fantastic job and were swizzling their way across the ice like old pros!  My daughter’s other sport is swimming, and she does private lessons, so the class format is new to her.

I would definitely recommend the group lessons at PWIC.  Online Registration is available.

I would offer the following notes, however.  First, while our coach did a great job, with a big group of little girls, I think she could have done even better with an assistant.  Preschoolers frequently need emergency potty breaks, and taking girls off the ice in a hurry to get them to mom and then getting them back to the group again could have easily been done by a junior coach.  Our lessons were on Tuesday mornings, though, so perhaps there are assistants in afternoon and/or weekend classes.  Also, be aware that there are NO makeup classes.  That was frustrating to me since it’s winter and we missed weeks due to illness.  I’m sure with such a large program makeup sessions are a nightmare to coordinate, so I get it, but be aware that if your child misses a session, you’re just out that week.

Lesson prices include a free skating session each week for your child to practice, but these are “use or lose”, so be sure that you take advantage before your session ends!