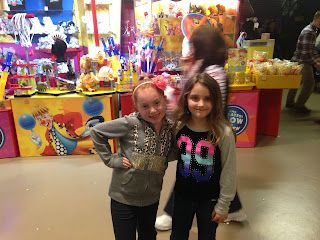 On Wednesday night we were fortunate to be able to go check out “Circus Xtreme” at Eagle Bank Arena (formerly the Patriot Center) in Fairfax.  Let me start by saying that Eagle Bank is a fantastic venue.  It’s a quick drive, parking is free, and it’s not DC.  That is all 🙂 My boys ended up having lacrosse practice, so we brought our friends Stacey and Kyla with us.  These two are in first and second grade, and they really enjoyed the show! 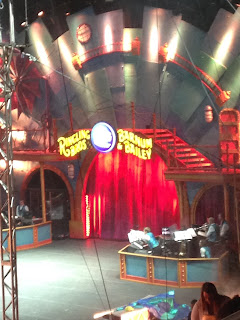 One thing that always impresses me about Ringling Bros shows is the sets and the costuming.  Everything is so well done and thought-out.  It’s also always impressive to me how they’re able to use lighting and inter-scene skits or dances to make it so you don’t even realize they’re resetting for the next act.  These performers are so well rehearsed and the crew is so quick and well-oiled that you don’t even realize where the new set up came from when the lights shift.  I would say that the way they organize is part of the magic! 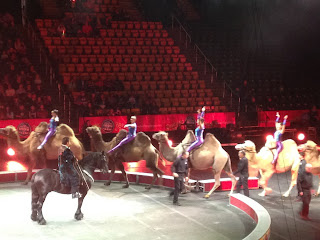 As you may or may not have read, this is the last year that Ringling’s famous asian elephants will be performing.  The elephants are now all moving down to the conservation center in Florida and will not be touring after this show.  The elephants are beautiful, and I like how they took the time to have their trainer talk about how the behaviors they showcase are part of normal elephant behavior, not things their bodies shouldn’t be doing, and about the conservation center.  There were some other animal acts, as well, including camels, horses, tigers, poodles (in fact, an oodle of poodles!), and snakes- but just during a dance scene. 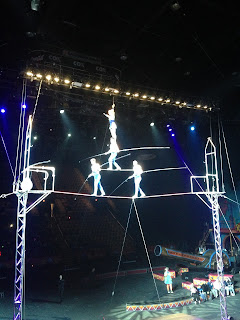 But what I really love about the circus isn’t the animal acts, it’s the human performers, and the amazing things that they can do! From strong men lifting 500 plus pounds with their teeth to the human cannonball to “circus sky divers” there’s a little bit of everything and it all looks incredible! Some of it I’d love to try someday (the sky diving act actually was some kind of bungee cord routine in glow-in-the-dark costumes and while I could never flip like that, it looked really fun!) but there are others that scare the bejeezus out of me, like the high wire.  This is an awful cell phone picture, but it’s a four-person stack on top of a tiny rope.  Nope.  Not now, not ever. 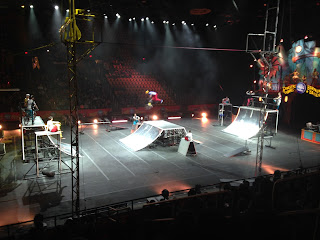 The group of guys that trampoline around each other and into a “house” structure was back, and my daughter really loves them.  New this year (I believe) were the biking performers who did jumps and flips and all kinds of craziness on the circus floor.  It was really cool, and I was really glad I didn’t bring my sons, because I think they would’ve made me stay late so they could turn in job applications to try to learn how to do that.  My daughter is already petitioning for a backyard trampoline setup.

You’ve still got time to check out the circus, visit their website for ordering details and showtimes.  The circus will be at Eagle Bank Arena through April 17th with various showtimes and ticket prices.