Highly recommended on the “Readers Recommend: Restaurants in Prince William County” is Pa Nuang Thai.  I actually thought I’d written about it before, but apparently, I haven’t.  Or, maybe I have, but it’s so good that I’m going to do it again. (Edit: I found it! It was for PotomacLocal.com)

It’s my website, people, and I’ll do what I want to.

So, Pa Nuang is amazing, and I like it better than all the other Thai restaurants in the county that I’ve tried.  Hands down. No, I don’t care that you like the other one by the Safeway.  Typically there’s room for everyone’s opinions, but right now I am taking a firm stand on Thai.

Their menu is extensive, and everything on it is amazing.  I love the crisp, fresh green papaya salad, and the Tom Kha Soup which is both sweet and salty, spicy and sour, and just generally amazing.  Hubby and I went their for a date night the other day, and we ended up with these: 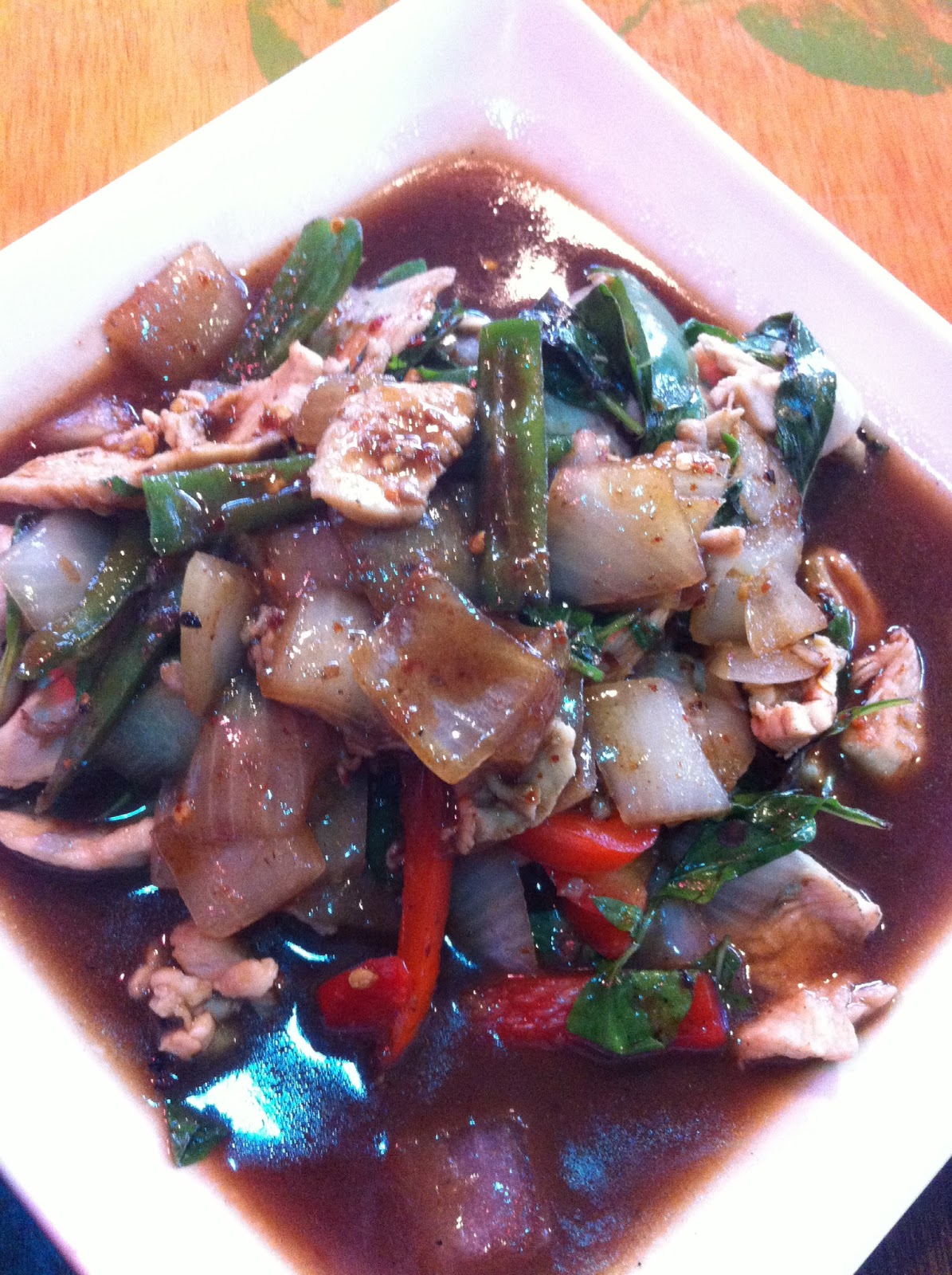 This is chicken with bell peppers and basil.  I’m sure it has an actual name, but it’s number 3 down on the “Entrees” section.  Yeah, I know that. 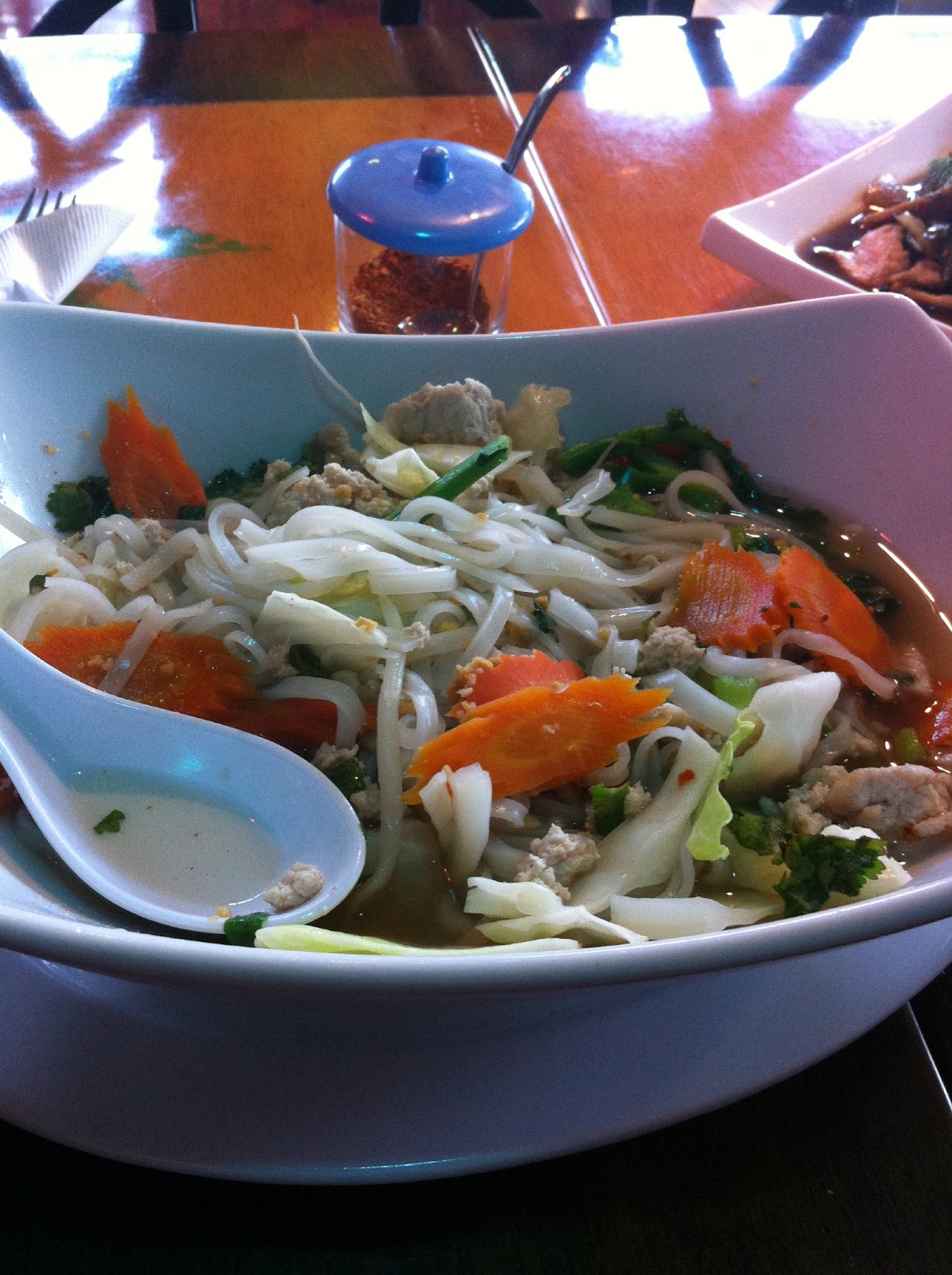 This is the soup I now want anytime there’s anything wrong or right with me.  I’ve had a migraine and been in bed for days, and reflecting on it, I’m actually ticked off that my husband didn’t bring me soup.  I know I wasn’t eating, but it would’ve reheated when I wanted it.  Originally, this was “Korean Noodle Soup”, but apparently now it’s “Clear Noodle Soup”.  It’s broth, ground chicken (or you can get it vegetarian or with shrimp…maybe? I don’t like seafood so I don’t reserve space in my brain for it) vegetables, and noodles, and it’s amazing.  If you’re a glutton for punishment like we are, they’ll even bring out crushed red peppers that are waaaay spicier than anything you’ve ever shaken on your pizza.  Next Level Delicious.

(Yes, we ordered two entrees just for the two of us.  It’s important to have leftovers when the food is this good.  Don’t judge me until you try it.  Even then, don’t judge me.)

Dishes can be ordered “American Spicy”, which I would call “not spicy”, “Regular Spicy” which is probably spicy enough for most people, or “Thai Spicy”, which will clear your sinuses and make your tongue tingle.  I personally enjoy Thai Spicy, but recommend starting a little further down the scale until you know what you’re getting into.

For the kids, I recommend the Thai Sweet and Sour, or, if they’re more adventitious, the fried tofu with sweet chili sauce is really good.  The sweet and sour comes with the chicken in chunks and crispy (a la “nugget” but with recognizable meat) and the sauce on the side. My kids actually like the Pad Thai with shrimp and the tempura carrots from my Green Curried Vegetables.  They’re not normal, though.

This is a really long post about how much I love Pa Nuang at this point….but it’s really, really, really good.  They’re not paying me to write this….I am, in fact, paying them.  For soup.  Which I could really use right now- I wonder if they’re open….