Guys, guys, guys.  I have been on a road trip in a car with my family for nearly two weeks. Wanna see? 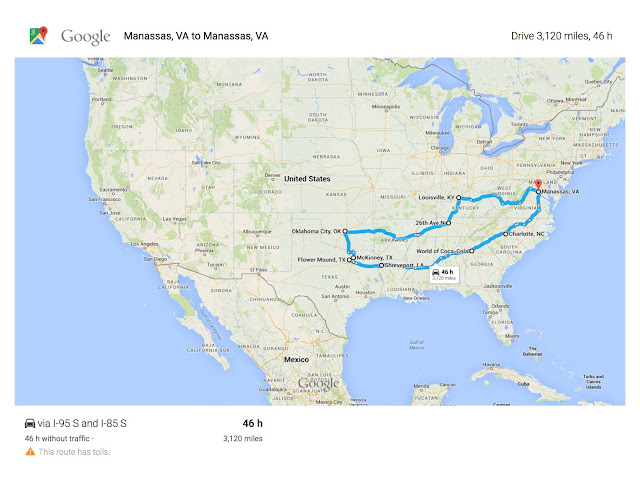 Whoot whoot! More details on that to come, but for now, suffice it to say, I have been gone a LONG time and obviously my fridge would not have been okay if I’d left everything in it for two weeks, so we cleared it out before we left.

There is my empty fridge.  What’s left? Some Starbucks Iced Coffee, Hummingbird food (the bright red stuff is not, in fact, Hawaiian Punch), and random beers people have left at our house after parties.  Yes, those have jack o lanterns on them, no, that was not the last time we had people over, I think they just keep getting burried behind the new stuff. I think there are a few limes, and an orange. #GoodEats 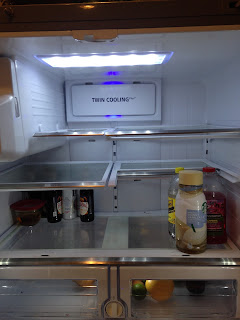 But, as we all know, getting home at 11pm and then having to go to the store is not fun.  So, instead, I used the Peapod app on my phone to order groceries from our campsite in Arkansass to ensure that Sunday morning (we got back Saturday night) I’d have groceries before church.  Amazing. 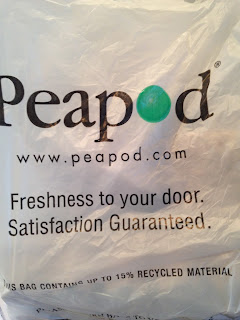 If you’ve never used Peapod before, they’re pretty much fantabulous.  You select your order and delivery time and they will bring your groceries to your house and bring them in to your counter.  You can change your order until the day before (in case you forgot something or realize you’re running low on an item you hadn’t ordered).  You can also do pick up if you’d rather.

It’s really easy to shop on Peapod.  You can type in a keyword list, shop by aisle, or shop the specials, whatever makes you happy.  If you’re a couponer, you can use your coupons, too- the savings will be deducted from your next order. They double coupons up to 99 cents.

Now, because I am The Tired, we are going to have YouTube Videos!! Strap in and don’t get motion sickness, it’s 7am on a Sunday and I drove like 8 hours yesterday.

One nice thing that is new to me (I’ve used Peapod before) is their Peapod Local Farm Box.  For $29 you get a selection of local fruits and veggies.  I got onions (3), a small cantalope, an eggplant, potatoes, tomatoes, and 3 ears of corn in this box.  Let’s take a look!

Hooray for local produce.  Now, I actually lined up all of my stuff for you guys.  I think I’m channeling some kind of leftover couponing mojo- so here is my “Haul” of groceries that I didn’t have to go get, and didn’t have to carry from my car to the kitchen: 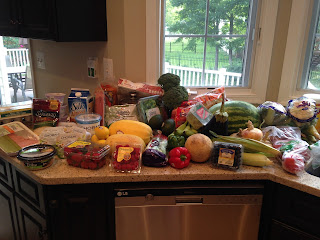 Nom nom nom nom.  There are a ton of fresh fruits and veggies, with the exception of the green pepper (which is totally passable, but not the one I would have picked) are awesome quality and ready for me to eat.

I buy a bunch of my stuff organic, but I didn’t think the prices were bad! All of this was $150.81.  I paid a $7.95 delivery fee, but when you sign up for your first delivery, you get free delivery and pick up for 60 days.  That’s two months of lazy/busy, which I am all about.

Want to hear me talk about my groceries until my phone runs out of storage because I took too many vacation photos? Wish granted:

And did it all fit in my fridge? It did! 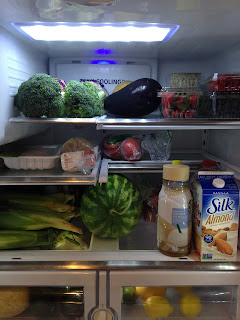 Happy fridge! With yummy healthy food for the next week.  If you haven’t tried Peapod yet, I’d really encourage you to give it a go.  I usually spend an hour or so in the grocery store, with my kids, and I would say that $8 is way below my billable rate for an hour, so it’s worth the swap!! I especially like Peapod for times like today where I’d been traveling, before holidays (because who wants to deal with that!!) and when you’ve got company coming and you’re already trying to do a million things.

Then again, I also like it when I just don’t have time to go to the store. Which, really, is all the time.

I haven’t tried the pickup, but I assume that’s cool, too.

And, if you’re not happy, you can call customer service and they’ll make it right.  True story, I did a Peapod order in Massachusetts when I was pregnant with my first son who was 2 weeks past his due date.  It was Thanksgiving Eve and we had alllll of my husbands family and alllll of my family who had come for Turkey Day because they were expecting to see a baby.

For those of you who have gone past your due date, you understand the mental state I was in.

I had ordered groceries because I was so waddle-y that the idea of shopping for 13 people was overwhelming.  (Did I mention I was also in college full time?).  My order arrived and I was happily unpacking when I noticed I had 4 heads of broccoli instead of 4 packs of celery.

Obviously, being a giant ball of whale-sized hormones, I started crying.  I couldn’t make Thanksgiving without celery!! I was going to fail my grandmother and my in-laws, and I was going to have to put on real pants and go to the store!! So I called Peapod and within 15 minutes someone knocked on my apartment door and gave me 4 packs of celery.  And he did not even bat an eye at the fact that I was wearing pajama shorts in late November in Massachusetts, because that’s the kind of quality people that Peapod employs 🙂

Now I had everything I needed to make dinner! Which was good, because my family ended up having to make it for me because I went into labor at 5am on Thanksgiving Day.  #Winning

We really like Peapod, and I am willing to bet you will, too 🙂