Review: Sunya- The Magic and Wonder of Math and Science Multiplying and Dividing

We’ve been playing a new math game from Sunya Publishing called Sunya – The Magic and Wonder of Math and Science Multiplying & Dividing. 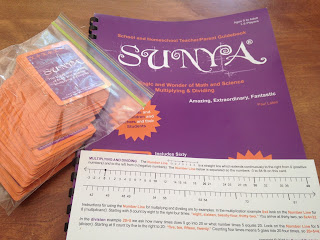 Sunya also comes in an addition and subtraction set, if you have children who are a little younger.  The game comes with two sets of cards, an instructional book, and a number line, which would probably be helpful in the addition/subtraction game, but my children found tedious to even attempt to use in multiplication. 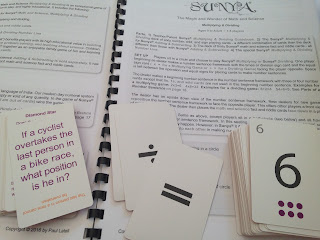 One deck of cards is comprised of some fun math tricks and questions/riddles.  This deck also has the math symbols in it that you will need to set up the game.  The other deck is number cards, which you will use to make your math sentences. 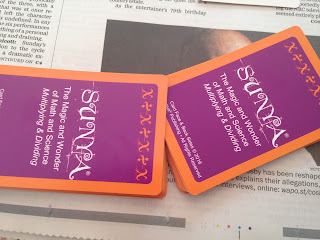 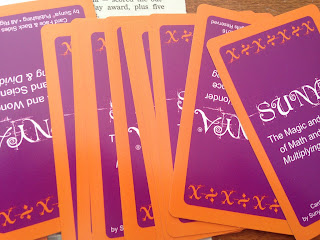 Which isn’t a huge deal, but is mildly annoying when you have to turn all the cards around 🙂 Save yourself the time and make sure your cards are facing the same way when you shuffle. 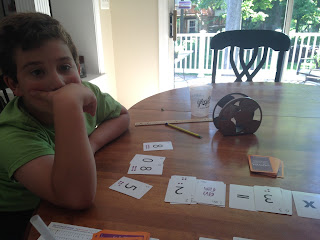 To play Sunya, the basic idea is that you use the number cards to make number sentences.  The dealer makes the first number sentence and subsequent players can use the numbers they left behind in addition to the numbers in their hand to change the sentence.  For example, if the dealer lays out
3×2=6 then then next player can use the cards in their hand to change it to 8×2=16.  My fourth grader had a fairly easy time of this, although sometimes a little hint to help him with if he had what he needed or if he needed to draw additional numbers was necessary. 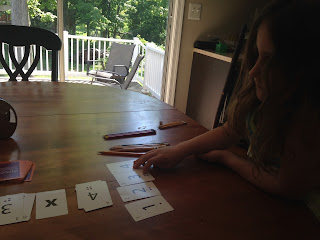 My second grader needed substantial help.  She knows her multiplication facts, but generating sentences using what was already on the board and what was in her hand was difficult for her.  My sixth grader found this “a cinch” but wasn’t playing with us when I took the pictures. We played open hands of Sunya since the rules encourage helping each other out.  Sunya means “none” in Sanskrit and that’s what you say when you are out of cards, which is how you win. The winner then reads a math and science fact card, which they can solve or read as the teacher and have others answer.  My kids enjoyed the math and science fact cards a lot, and have actually spent time going through each one so they can try to stump daddy when he gets home from work. 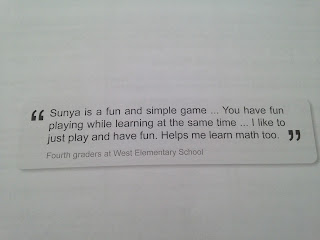 This quote, “Sunya is a fun and simple game…” is included in the back of the instructions.  We did, ultimately, have fun playing the game but you should know there are a superfluous number of rules.  For this simple card game, there are 9 principles that you have to learn before you can really play.  The directions for the game are actually a 25 page book, which is rather intimidating.  I am used to game directions that take up one 8.5 by 11 sheet of paper, at most.  In Sunya’s defense, they do a fair amount of explaining of each rule, as well as of mathematics principles, and the instructions also include copies of the math and science facts and riddles cards, which I’m not sure why you need in the book since you have them as cards, as well as a page of famous math quotes, and an explanation of the Sanskrit origins of math, making the directions 15 pages long, but that still seems like a lot to me. We did like playing the game, but especially with my second grader we ended up ignoring most of the rules and just playing a simple version of making math sentences without too much worry about where ones/zeros/wilds could go or how many cards could be played to a number sentence position.  I think with a classroom situation, such as an entire fourth grade class of math students, you could ultimately introduce all the rules (and variations in play) and have this be a fun and successful center.  We are enjoying Sunya as a math supplement game, and after a few rounds have mastered all the rules with my older children.
Post Script: We were asked if we preferred color or black and white for the instruction manual, and i would say that a MUCH condensed color page (single) would be my preference, rather than a book in black and white or color.