If you’ve been reading my site for any amount of time, you know that we’re huge fans of “Mommy Dates” and “Daddy Dates” in our family. (If you haven’t been reading my site, then welcome.) We truly value having one-on-one time with our children so that we can really have time to know their hearts and how they’re doing.  We try to make sure that each child gets individual time with one of us at least once a month.  Sometimes it’s a big deal and we take them out to do something that costs money, but other times it’s a walk, or a trip to Starbucks, or a walk around Target and something from the $1 section.

On New Years Eve Day, our boys were invited to go play with friends, which left our daughter home alone.  I needed to do some lesson planning, so she and daddy decided to capitalize on their alone time by heading out to Skate N Fun Zone, which offers a New Year’s Eve Party at both mid-day and midnight.  Brilliant!  They actually offer special events both weekly and monthly, including a homeschool skate, rock-n-stroll for parents who have infants and older children, and more.

Skate N Fun Zone is located at 7878 Sudley Road  Manassas, VA 20109 (for those of you who always like to have an address listed) 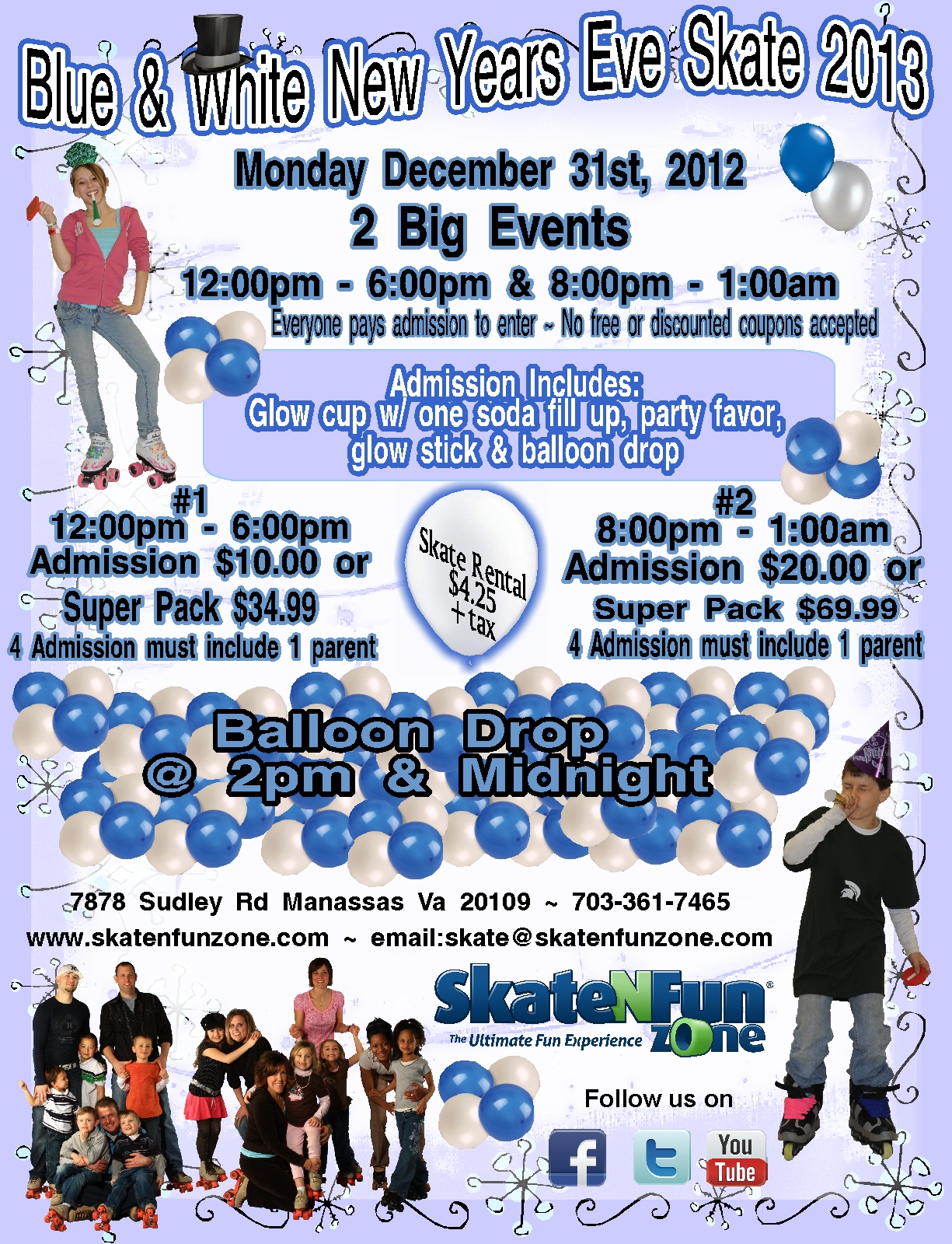 $10 per person covered their admission, glow cups, a balloon drop, party favors, and glow sticks.  With just two of them, it was definitely workable, although they also offer a discount for purchasing a “super pack” with 4 admissions.  For a special event like New Years, I would say that’s worth it. 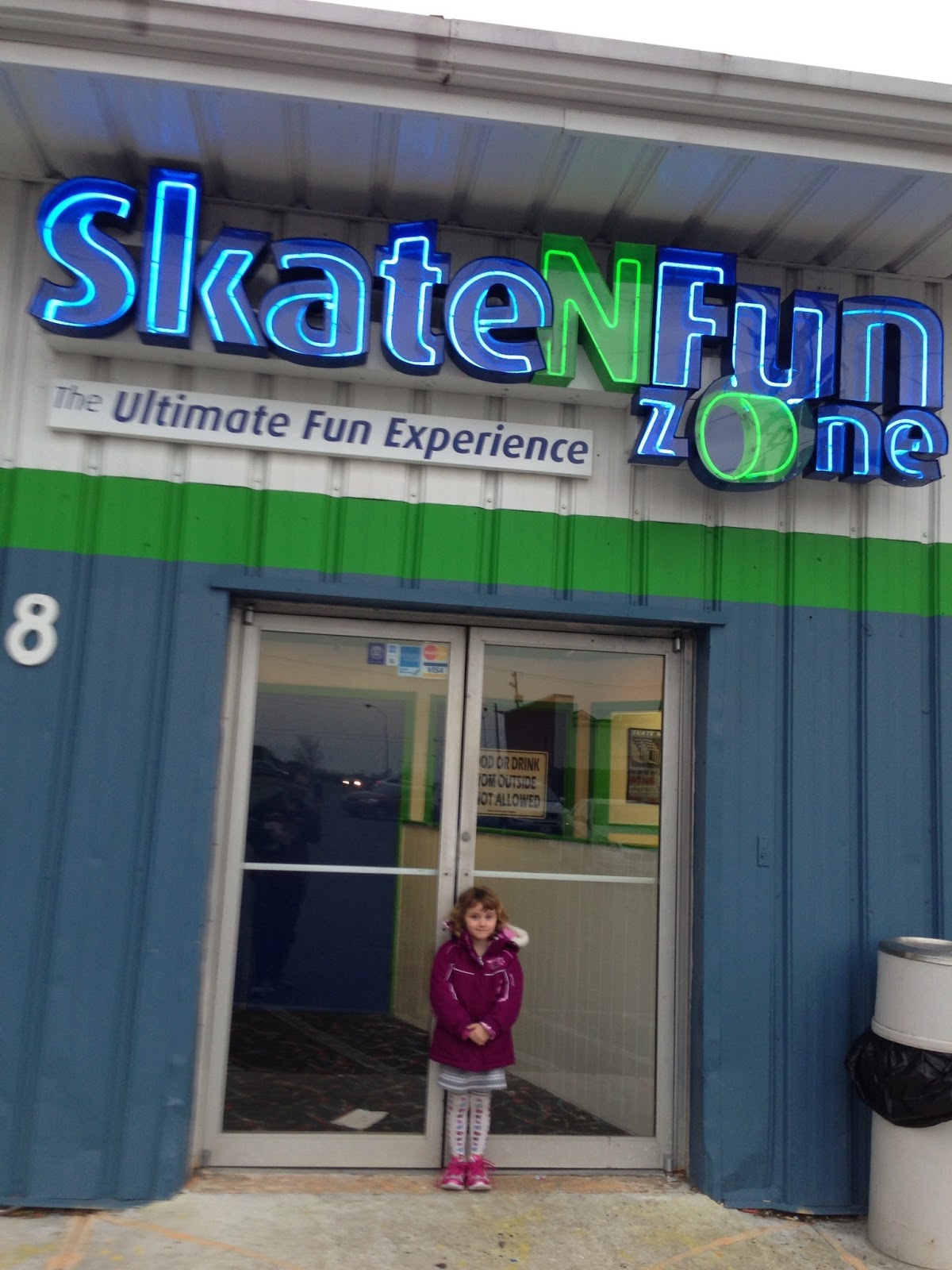 The actual building is behind a few other buildings, so while there is a sign from the road, you have to “do kind of a u-turn thing” to get to the actual location.

He’s an engineer, guys, not a writer.

For this particular event, there was no parking available, and my husband ended up asking a local Liberty Mutual agent if he could park in his lot, and he was very nice, since it was New Years.  However, inside my husband heard there’s overflow parking (somewhere) so be sure to check on that if you find yourself in the same situation.

After they rented their skates, they found a spot to drop their stuff, which was slightly challenging since there were so many people.  Lockers are available to rent for your valuables, which is probably a good idea especially on a special event day.  He had this recap: 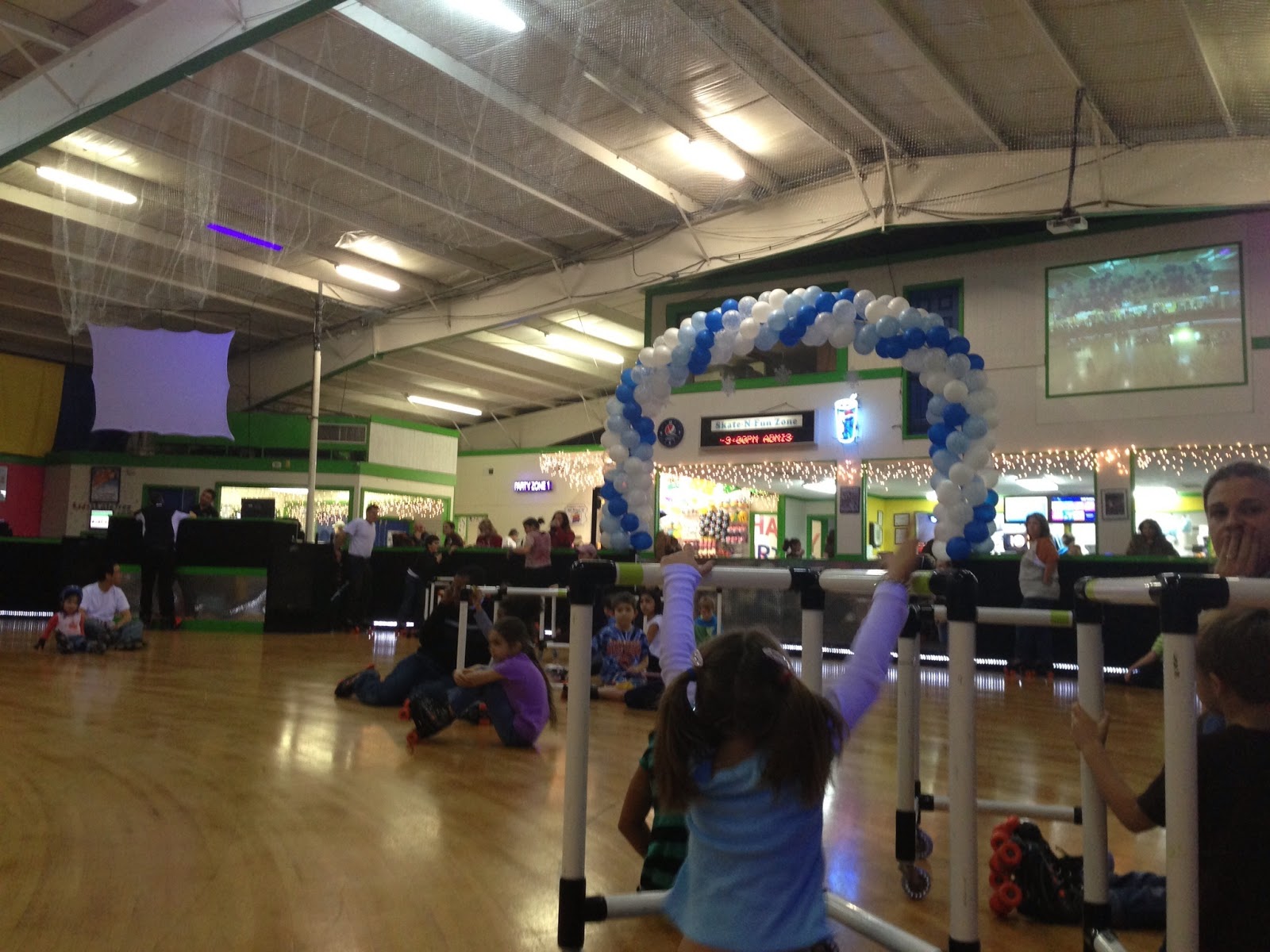 “Everything seemed relatively clean, but definitely used.  The floor was definitely well-worn, but it didn’t impede our ability to skate.  There’s a jungle gym included in the price, a little food area where you can buy food, and an arcade area similar to Chuck-E-Cheese where you can pay for games and get tickets to trade in for lame prizes.” 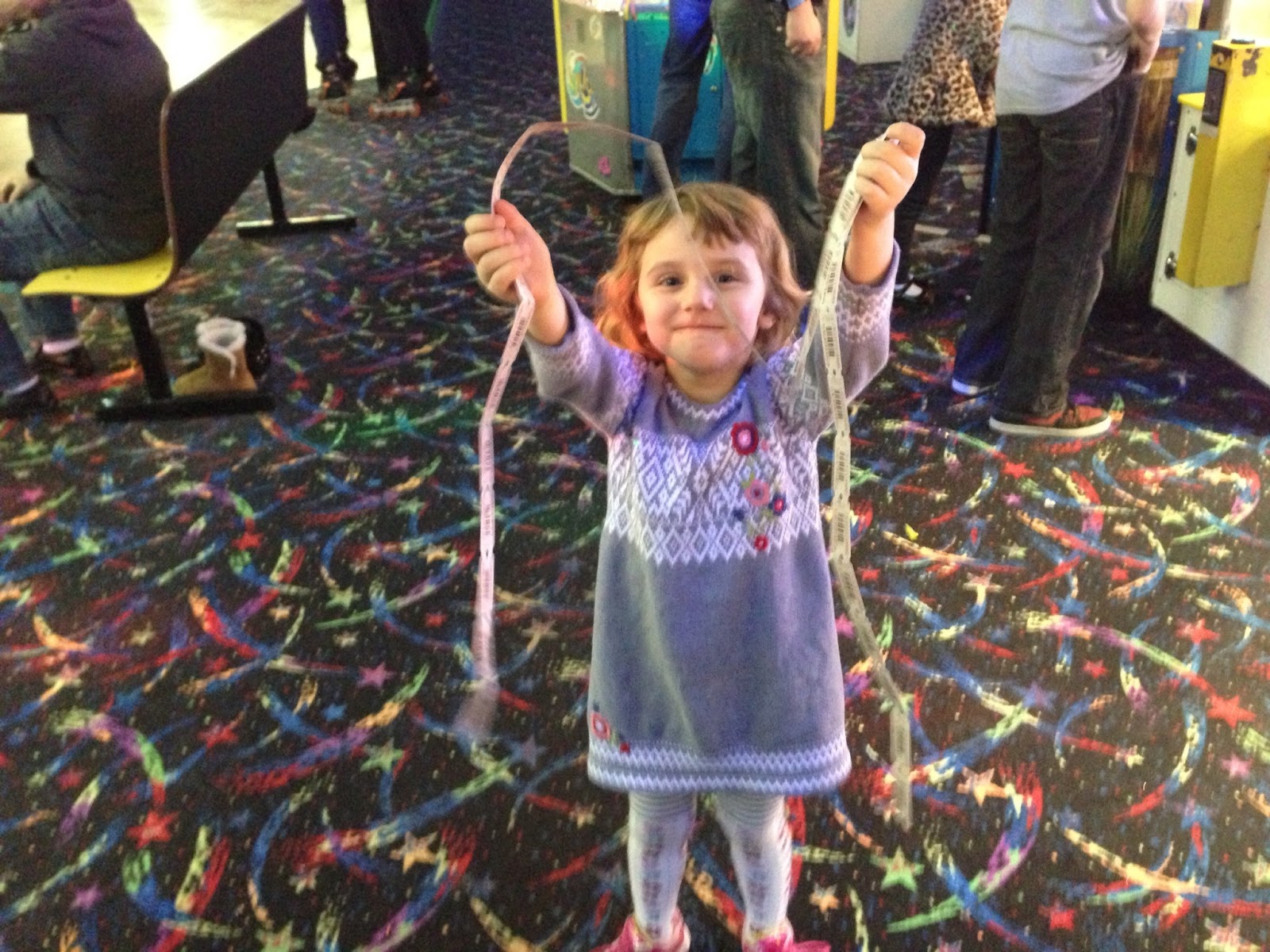 “I’d say what I liked most was that they had a large variety of things to do, and even with the skating they’d shift between a game (like Limbo or backwards skate) and regular skating, and there was the arcade and the gym, so we were able to rotate a lot and stay for a pretty long time considering our daughter is 4.  We were there for several hours.  We got there just as they were finishing the balloon drop, and it was loud, so she wasn’t a huge fan of that becuase everyone was popping balloons and that was “scary” for her.  I’d go again, we had a great time. I also liked that their rules included the ability to kick people out who were not dressed appropriately, were cursing, or appeared to be under the influence of anything.” 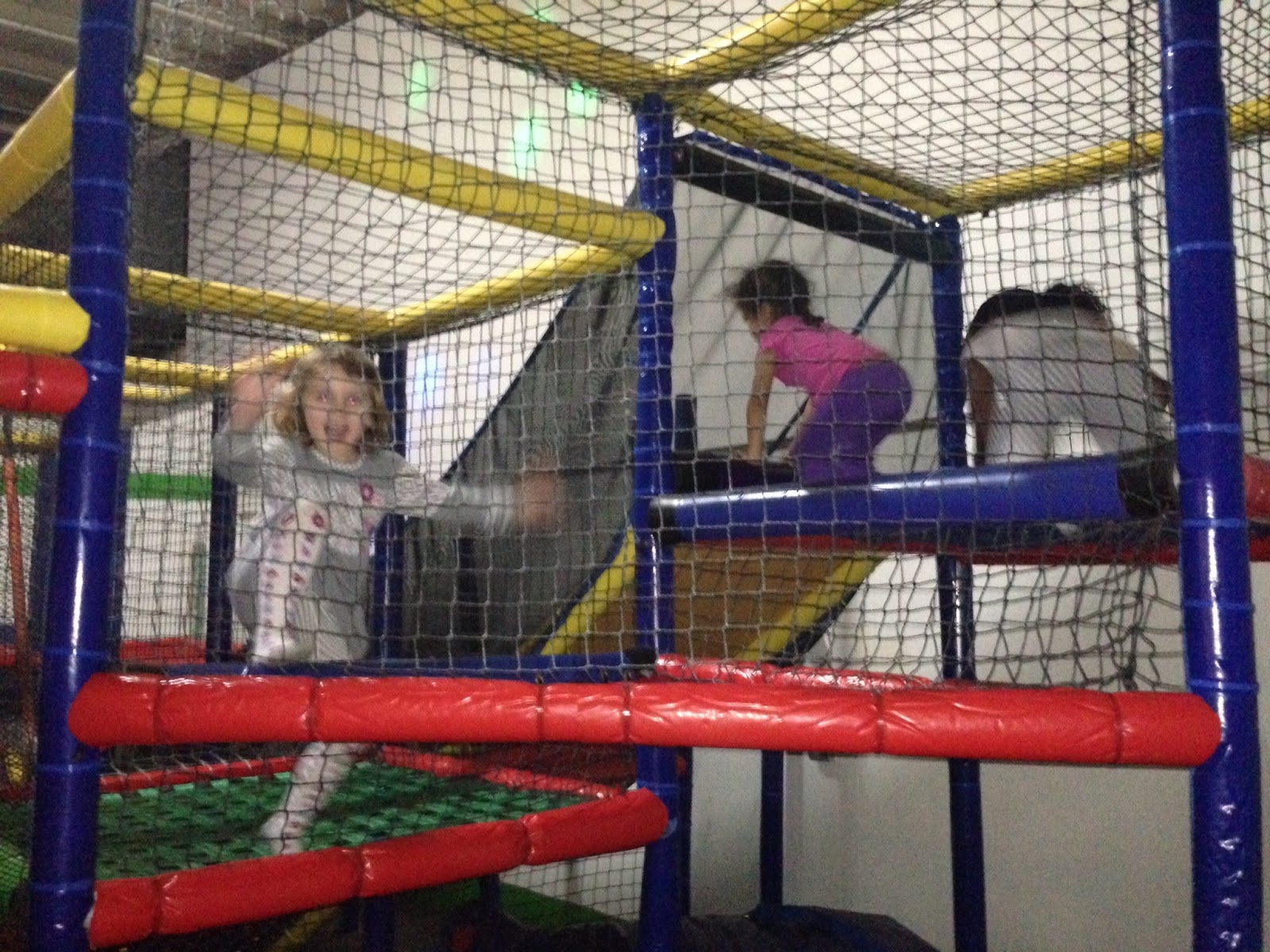 I tried to grill him about something negative to say, but the hard part about reviewing things in our family is that we, generally speaking, have fun, and decide that it’s a good time 🙂

My daughter also said that she had fun and would go again.

Especially with her daddy.