Note: My sweet, sweet friend Heidi agreed to go check out Peter Pan 360 for me while I was on vacation.  (There has to be some kind of an upside to being my friend! Free tickets are it!) She and her daughter checked out the experience at Tysons Corner, and shared their thoughts below! 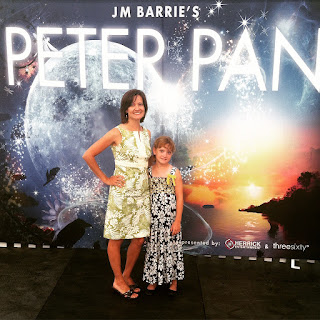 Honored to be asked to attend and review Peter Pan 360 for
PWCMoms, I actually had no idea what it was. Somehow I had missed all the
facebook and tv commercials. So I zipped to the website to figure out what
“360” meant:
“Escape to Neverland
in a whole new way with this spectacular, innovative live stage production of
PETER PAN that combines intimate theater-in-the-round and overhead surround CGI
projection; with actors in dazzling flying sequences forty feet in the air and
whimsical puppets that bring J.M. Barrie’s classic tale to fantastical life,
creating a truly unique environmental theatrical experience!”
The videos and descriptions were enthralling. I was excited
and full of anticipation about a special evening out with my daughter. (I thought
my 11-year-old might be a little old to fully enjoy and appreciate this
experience.)
When I told my 8-year-old daughter we were going to see the
play “Peter Pan” she started reminiscing about the various other Peter Pan
experiences we have had: seeing the musical at a university theater, watching
three different movies, as well as seeing “Jake and the Neverland Pirates” live
at Disney World when she was four. I explained this would be different from all
of those experiences, but I didn’t give her any details. (I just hoped I was
right!!)
Good news….I was right! It was fabulous. Take your favorite
aspects of various theater experiences (part Imax, part circus, part theater,
part puppetry) put them together under a modern big top, and you will enjoy the
story of Peter Pan with lots of laughter and gasps of amazement. We didn’t stop
smiling the entire time. 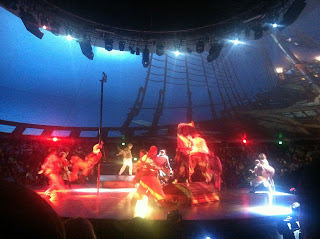 The temporary theater is under a tent near Tysons Mall in
McLean. You have to park at the mall’s free garage (there are plenty of signs
to direct you) and walk a long city block to the theater. (Wear comfortable
shoes and clothing. I was over-dressed.) There are plenty of photo ops before
you enter the theater and around the lobby, including a backdrop for a “photo
booth” to capture a fun instagram photo (#nevergrowup). Sit in your seats early
for the pre-show entertainment…very talented musicians singing pirate song
classics.
The theater-in-the-round was a lot smaller than I expected,
but that is part of what makes this a more unique experience. I had the
impression there are no bad seats: we sat about half-way up and it was perfect.
You get to actually see the actors’ facial expressions! The stage is raised and
much of the action is in the air, so even if an adult is sitting in front of
your child, her view will not be blocked. The overhead projection appears to be
perfectly viewable from any seat as well.
I loved hearing the belly laughs from my daughter, especially
when Tinkerbell threw fabulous temper tantrums face down on the stage. I
enjoyed watching my daughter gasp when the actors flew through London. And I
was impressed with the gymnastic and acrobatic choreography that added to an
already fabulous, classic story. 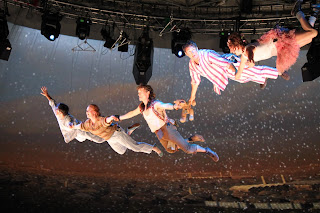 My 8-year-old’s review: “My favorite part was everything! It
was also really funny because Michael, the little boy, hit Captain Hook in the
head with the Teddy Bear. I liked the scenery and how they flew. I felt like I
was in there with them. Tinkerbell was really funny. She was my favorite
character because she had tantrums when Peter Pan said they had to go save
Wendy.”
It was a great production and I highly recommend it to your
family! 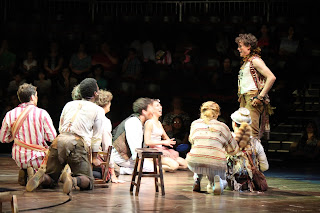 Just the facts:
Recommended for ages 5 and up, although younger children
will enjoy it, too. Older children may not fully enjoy the whimsy of this experience.
Pros: Even if you have seen Peter Pan “umpteen” times, this
will be a unique experience, small theater, engaging actors, visually
entertaining, photo op with a couple of actors after the show
Cons: Hard to understand the British accents, loud noises
and lights may be uncomfortable for children with sensory sensitivities
(Note: The crocodile “Tick -Tock” got very close to the
audience, growled loudly, and made a few little ones cry. Capt. Hook slices
Tiger Lily’s neck to kill her, not graphic, though. But (yay!) she was one of
the first out for applause.)
The show is in DC for four weeks with an all new cast (from
the previous run). It lasts approx. 87 minutes with a 20 minute intermission. Tickets
start at $30.  There is a concession
stand and merchandise shop at typical theater prices ($20 t-shirt, $15 foam
sward, $5 soft pretzel, $7 popcorn.)
http://www.peterpan360.com/
_________________________________________________
Disclaimer: PwcMoms was provided with free tickets to this event, but all opinions are our own.  You can tell because Heidi is entirely too nice to lie.  She’d tell you.