There was a group purchase deal…..
I feel like nothing good ever starts this way.  At least not for me.  Whether it’s air duct cleaning or date nights, somehow the adage that “you get what you pay for” seems to come back to bite me.
Anhow.  There was a deal on The Murder Mystery Co. for Baltimore, MD ($58 for 2 people, which is over half off the normal $120). I’ve always wanted to go to one of these, and my sweet friend Katherine was willing to go, too, so we decided on double-date night.
Then I realized there was a 1980s theme and a costume contest, and y’all, I play to win. This is how I ended up at Party Co. the other day (which was awesome, btw). 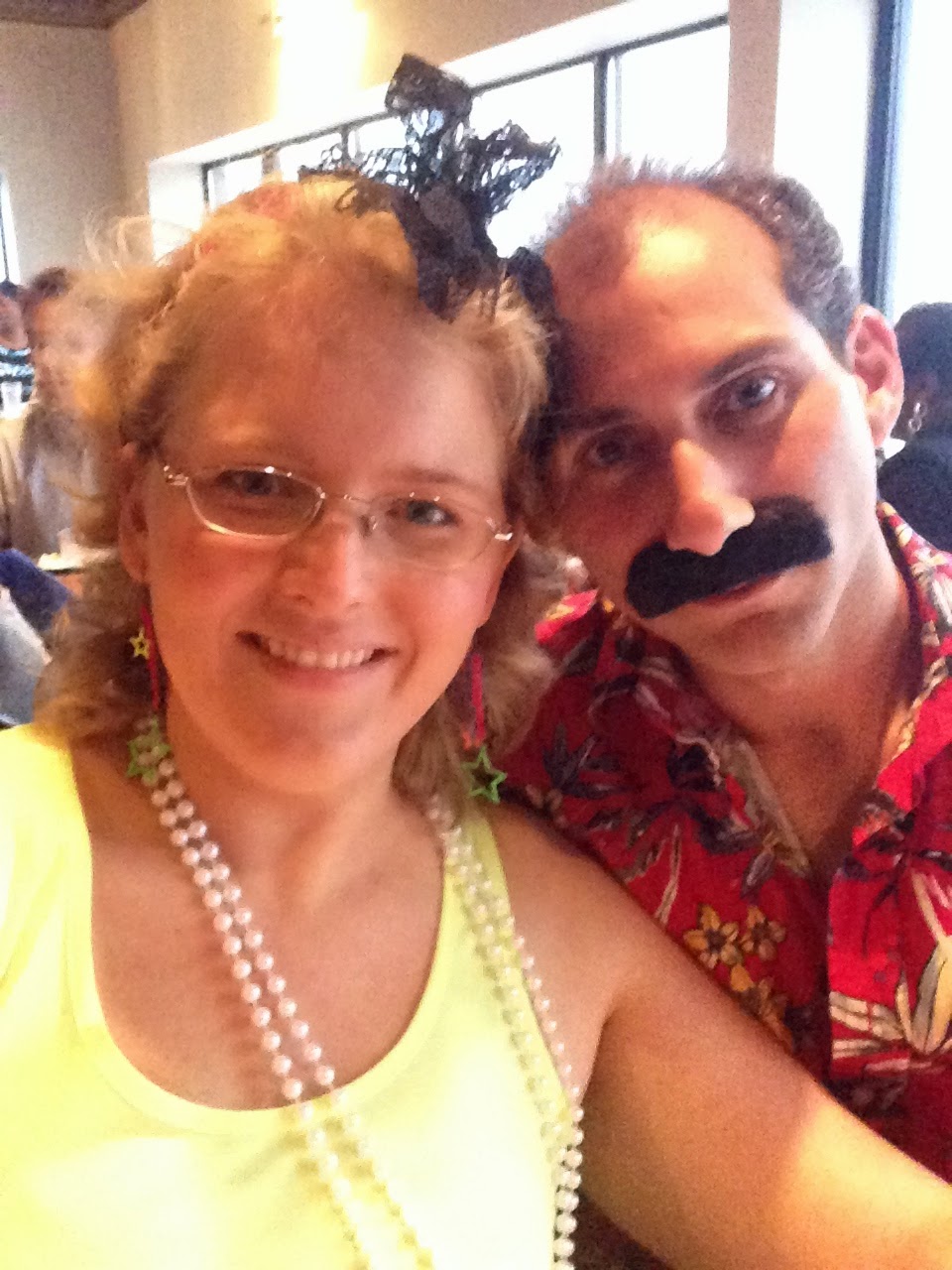 I bought all the 80s things. A ruffle skirt dress, Madonna-style headband, fingerless gloves, neon star earrings, jelly bracelets, the whole nine yards. My hubby decided he was going to go as Magnum PI, so with a stick-on mustache and several buttons left open, he had it made. 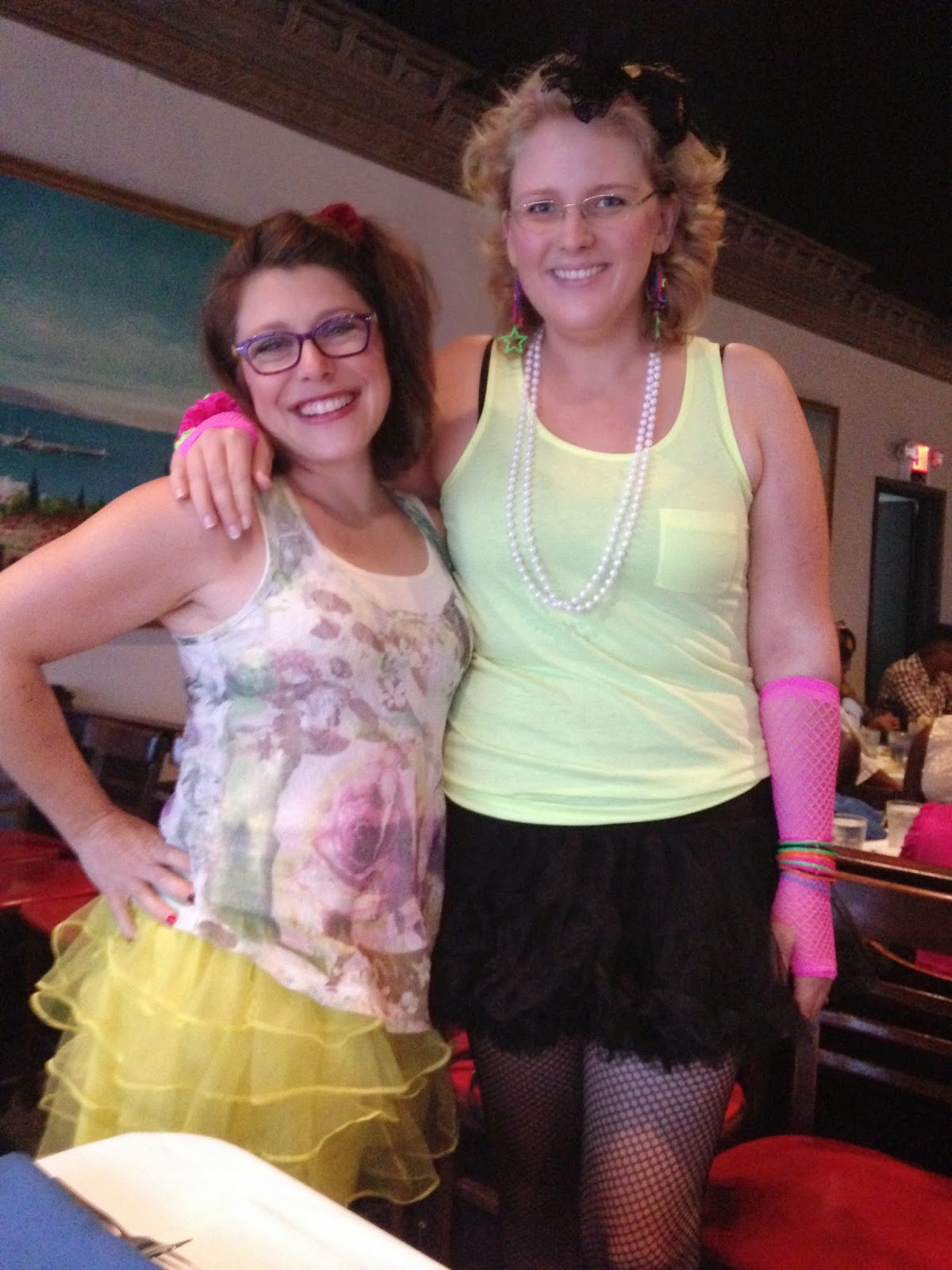 Luckily, Katherine and her hubby are joiners, too, so we all looked fab together. This was all definitely fun.  However…
When we arrived, it was a little hard to find where we were going.  The confirmation gave an address, but neglected to mention it was inside a restaurant, which would have made it easier to spot where we were going.  The Greek restaurant you are looking for is on the corner, and it’s street number wasn’t immediately visible to us while we were trying to find our way there and park.  We did find it, though.  Dinner service is going on downstairs while the murder mystery happens upstairs, so note that you will be sporting your 80s wear (or whatever the theme is) past some concerned-looking diners.
Traffic was…well, it’s the DC Metro area, so enough said.  We left to get there at 6:30, but ended up arriving at 7 when the show was supposed to start. They didn’t have a table ready for us and ended up seating us with nothing at the table and assuring us they’d bring us “the freshest salads in the place”.  Eventually we got water and silverware.  This was a little odd because we had to confirm our dinner order before we came (although when we arrived we ended up having to confirm and get a torn piece of notebook paper with our dinner selection on it to place at the table). It just seemed like they should have known how many people to expect. 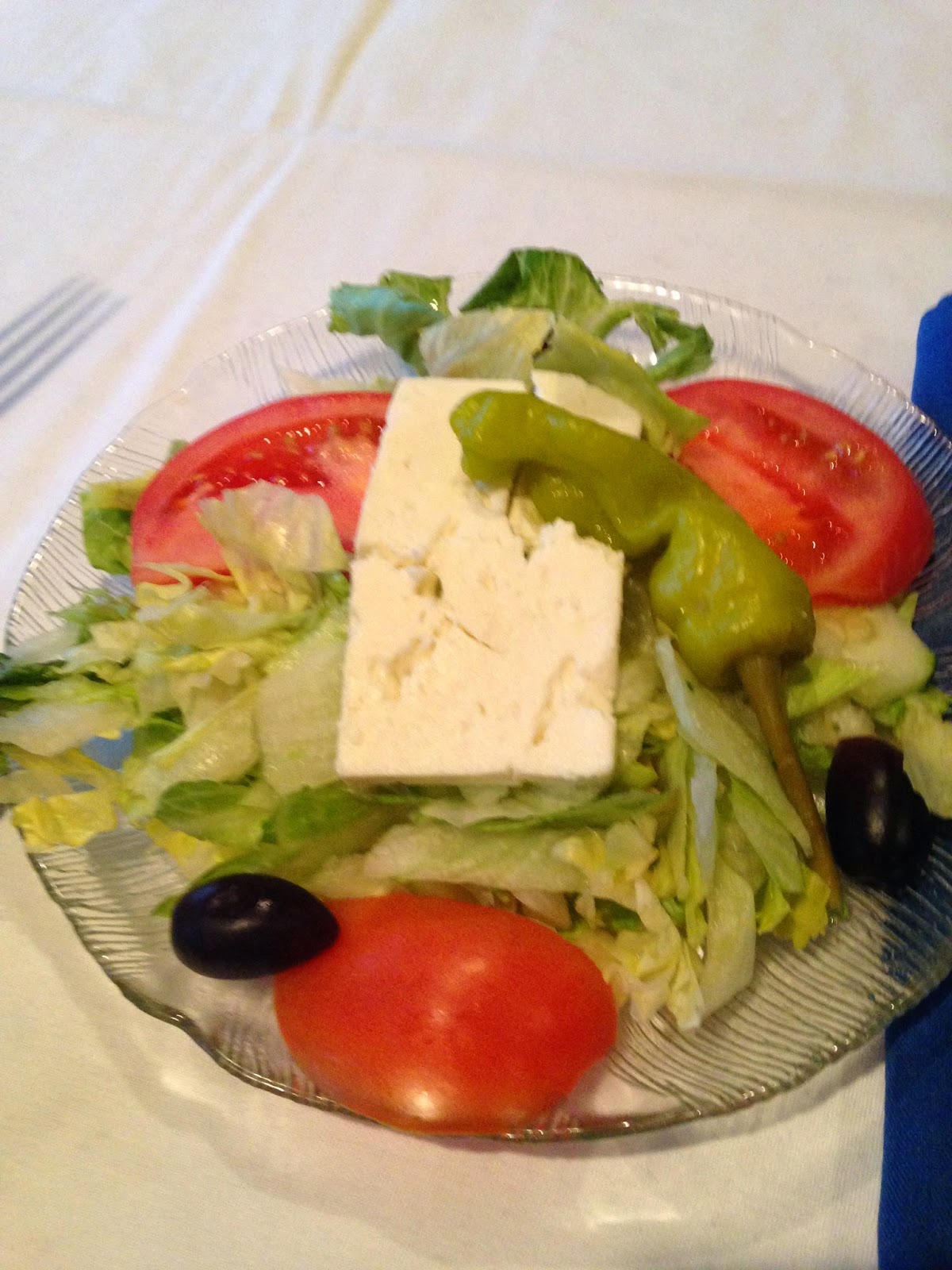 I’m not sure I’d call it “the freshest” but the salad was good. And it had Feta. I love cheese.  It’s so yummy and amazing. Mmmmm, cheese.  While we ate dinner, the actors started to introduce the idea of the evening.  Unfortunately, most people were still talking and the actors were sharing one (1) microphone, so it was frequently hard to hear what was being said. We were invited to get up and use the money on our tables to bribe suspects (some of whom were audience members) to give us clues from the notebooks provided, but our table wasn’t ever given money, so we couldn’t really bribe anyone. We also never got a suspect sheet, so it was hard to keep the characters straight. 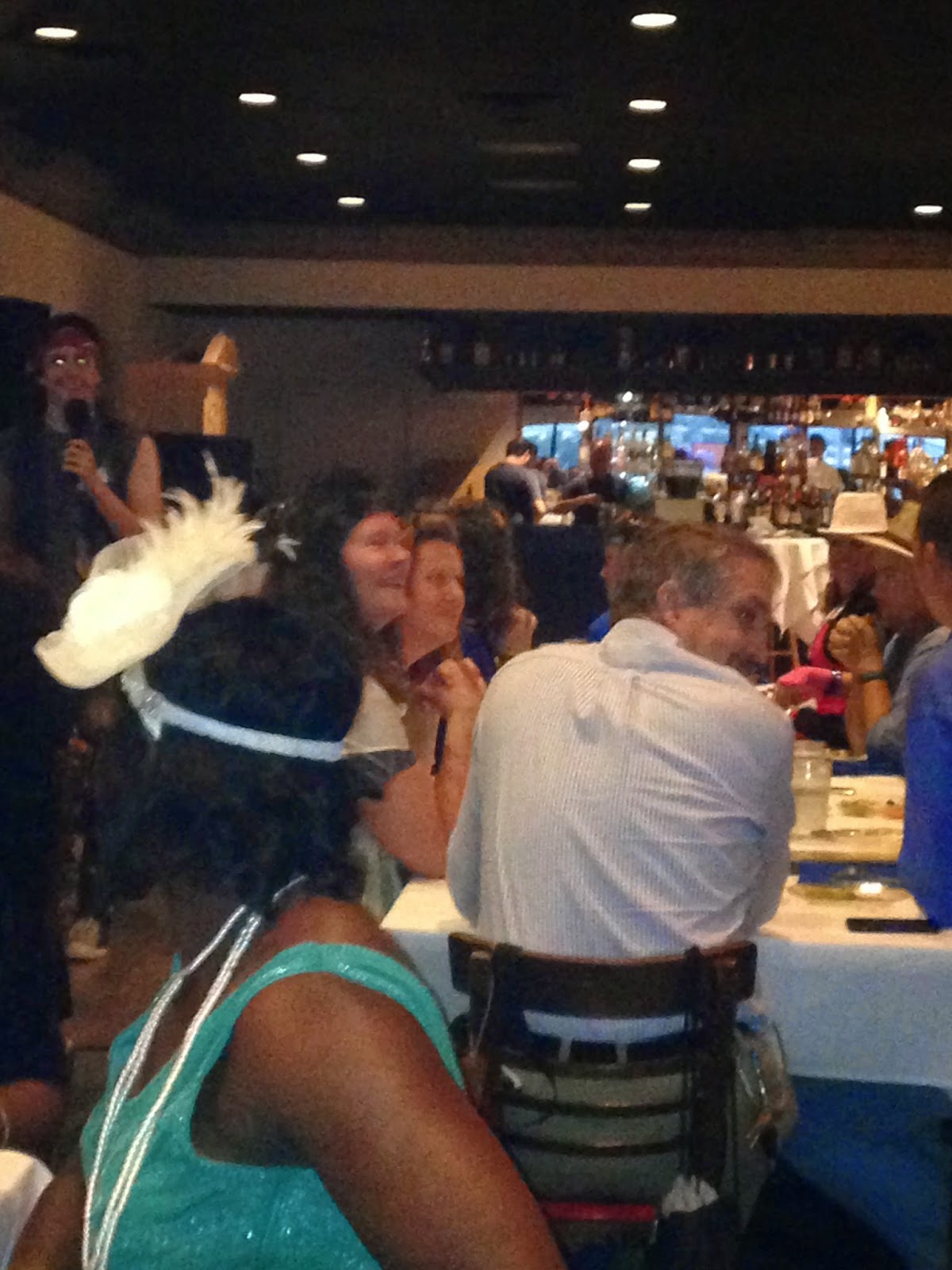 Dinner options included chicken kabob, lamb kabob, moussaka, and I think there was one other choice, but I don’t recall what it was.  Water is provided with dinner, drinks from the bar are extra and for two we paid $15. My parents had been to a different murder mystery theatre a few years back and told us that while the show was good, the food was inedible, so our expectations were really low, but dinner was actually okay, albeit inconsistent. I got two pieces of butter-soaked (and I mean that in a happy way) potato, where my husband had five, a mound of what I’m pretty sure were canned green beans with tomatoes and SALT (also totally fine with me, but my friend wasn’t into them) and a kabob with 4 pieces of chicken, a mushroom, and some onion and bell pepper. I wouldn’t go back just for the food, but I ate my dinner and it was fine.

The other inconsistency problem was service time.  Two of the ladies at our table weren’t served dinner at the same time as us, and we ended up starting without them because one lady waited 20 minutes for her food, and the other waited almost 40.  They were, again, promised “the freshest food here”, but I think they really just wanted their dinner.  Again, we all had to confirm our menu choice before we arrived, so the number of dinners required really shouldn’t have been a shock, and even if it was, they should have counted as people were arriving. 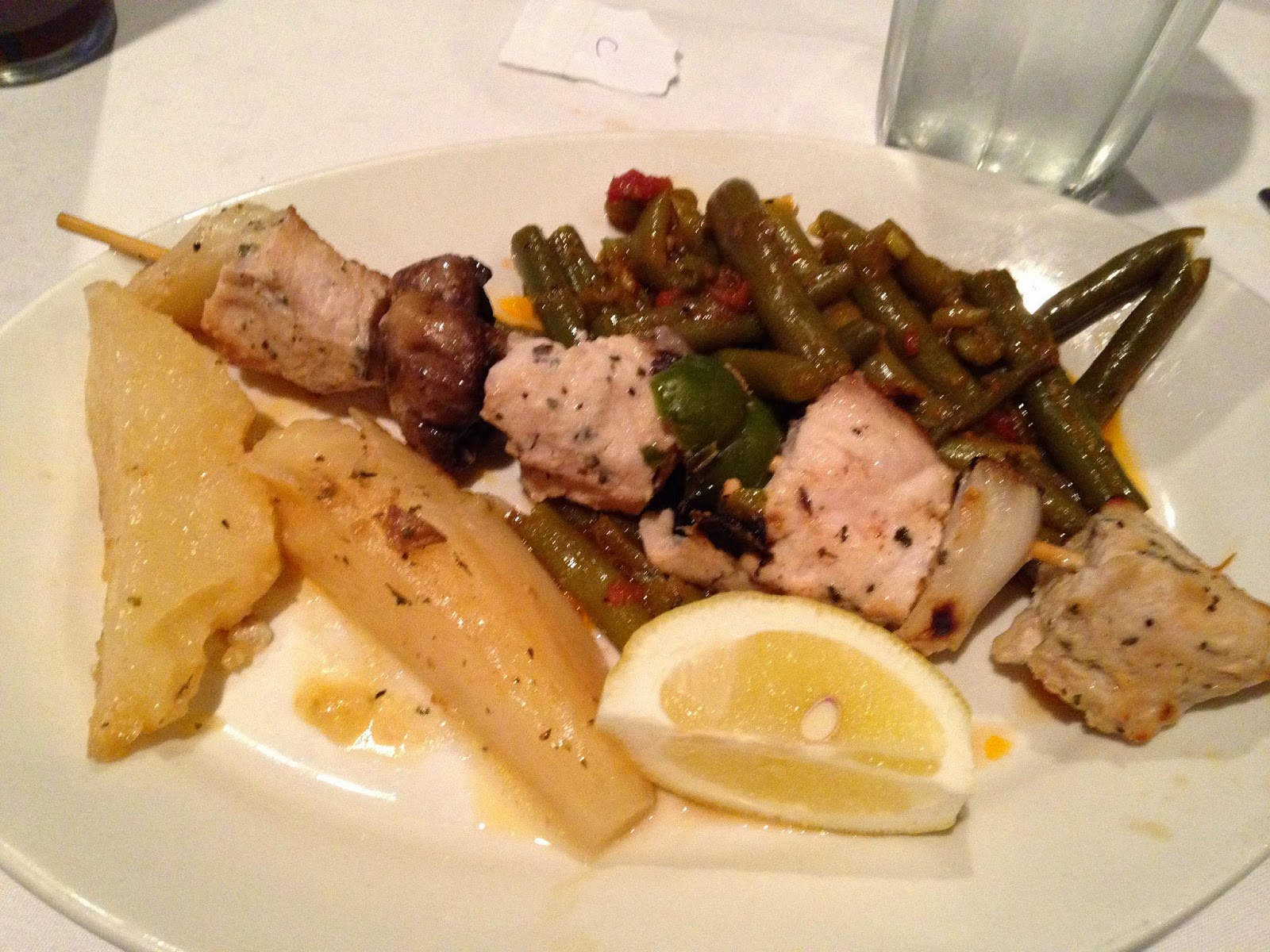 There was, again, a period of time for people to get up and bribe/ask questions, but since it took so long for the servers to get around to the back tables where we were, we had just had our food put down when it was time to go mingle and ask questions, and we still really couldn’t hear the dialogue, so we opted to sit and make jokes instead. 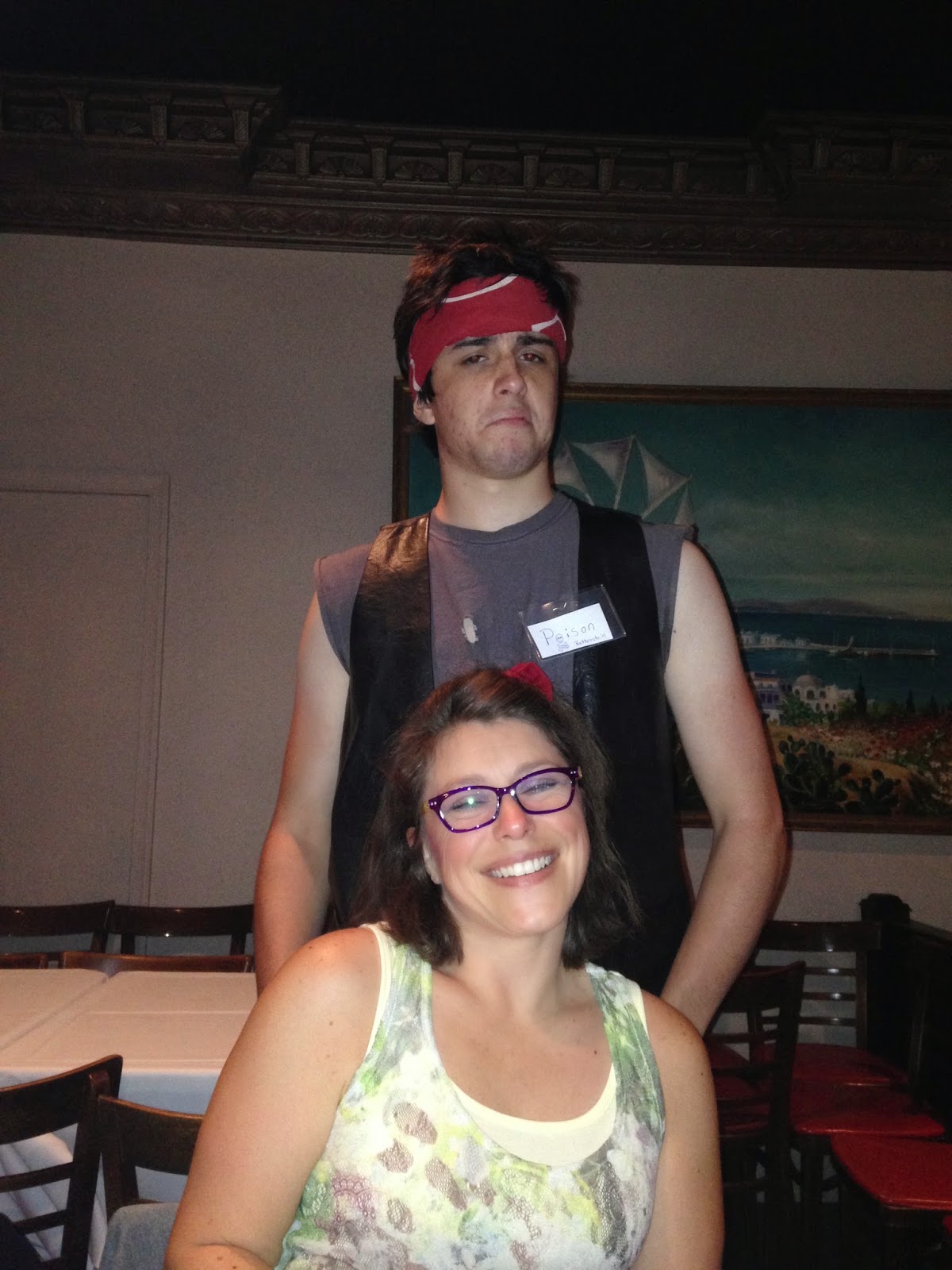 Our table was supposed to be the “Poison Fan Club” (that’s Poison in the red bandana).  Katherine was fun to take- she yelled and hooped it up whenever we could hear enough to think it was our turn to scream, and we had a good time together, even if the Murder Mystery wasn’t really happening for us.

Finally, dessert was brought out on one large plate with a few types of baklava and some kind of a milk custard thing.  Everyone got one item, but since it was passed around family style, I got the milk custard which was not my thing, although my table mates who got baklava said that was really good. 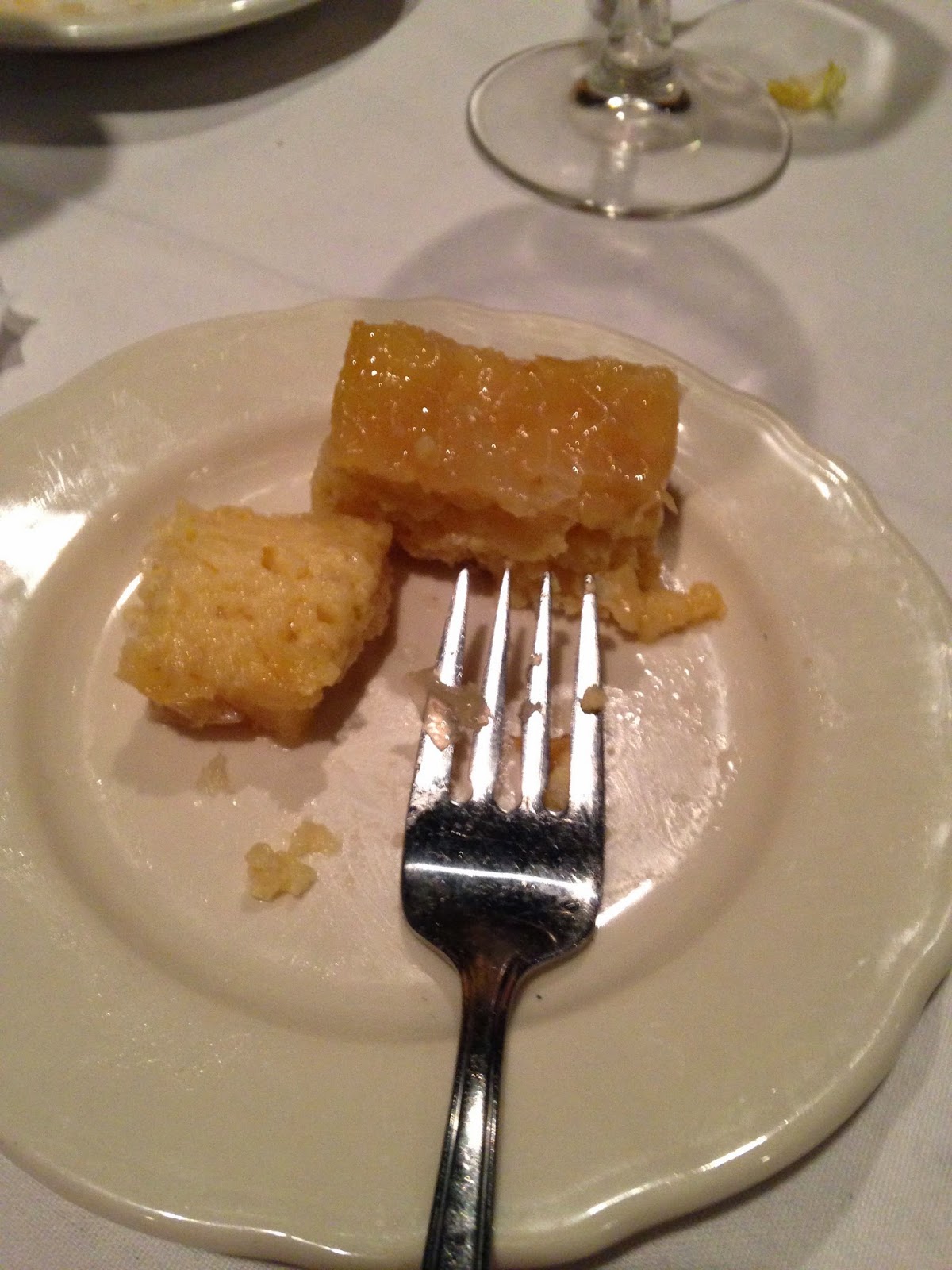 In the end, the other ladies at our table ended up guessing that the 8-year-old prodigy “did it” and were given a “Dead Last” award. We didn’t even bother guessing because our “who done it” sheet came without a pen…plus, we were really kind of over it at that point, anyway.
I’m not sure if all murder mystery dinners are like this, or if there was some extenuating circumstance (Maybe they just switched to the 80s script? There were women there in 20s costumes.), but it wasn’t really something I would go back for, and I definitely wouldn’t pay more than I did for our Living Social/Groupon, whichever it was. We had fun with our friends, but the Murder Mystery portion was definitely a bust.  If I had paid the full $120, I’d actually probably be pretty ticked about the whole thing.  Even if it had been really good, I’d think that was pricey for what we got.  At $30/person it wasn’t great.
Have you ever been to a Murder Mystery Dinner? Where did you go? Would you recommend it to others?
____________________________________________________________
Disclosure: I paid for my tickets, I was not asked to write a review or compensated in any way.  No one was harmed in the making of this post, except maybe the milk pudding, which I really didn’t like and ended up squishing with my fork.  But it’s all good, because it was pudding.