I feel like I should re-title every review I do “Kristina’s Sub-Par iPhone Photography Presents:”, but I’m not going to because that’s a lot of typing to have to do every time.
Ain’t nobody got time for that.
But what they do have time for is a nice dinner out at Malones of Manassas.  Located in what used to be a church, Malones has a warm, intimate feel.  It’s slightly louder than I would have expected, but I think that’s just the voices carrying as they do in church basements- although this former church basement doesn’t look like a fellowship hall anymore.  There’s lovely stone and a wine wall and a bar complete with flatscreen TVs in case you want to have date night but your husband needs to watch the game.  I think the people actually seated at the bar were most interested in that 🙂 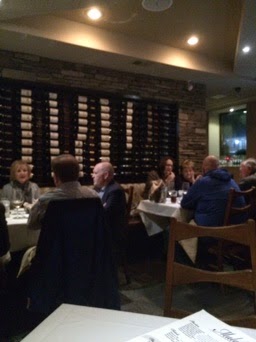 Hello people sitting near us! I’m taking a picture of the ambiance and you’re in the way.  I hope you’re having a lovely dinner. 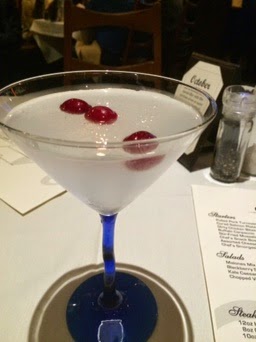 So, on to the food! This is a white cranberry martini, which looks like Christmas to me, with tiny ice crystals and red cranberry garnish.  Tasty!  We ordered an appetizer, but it never made it to our table, which was okay because we decided that meant we were destined to order two deserts instead of one. Better! 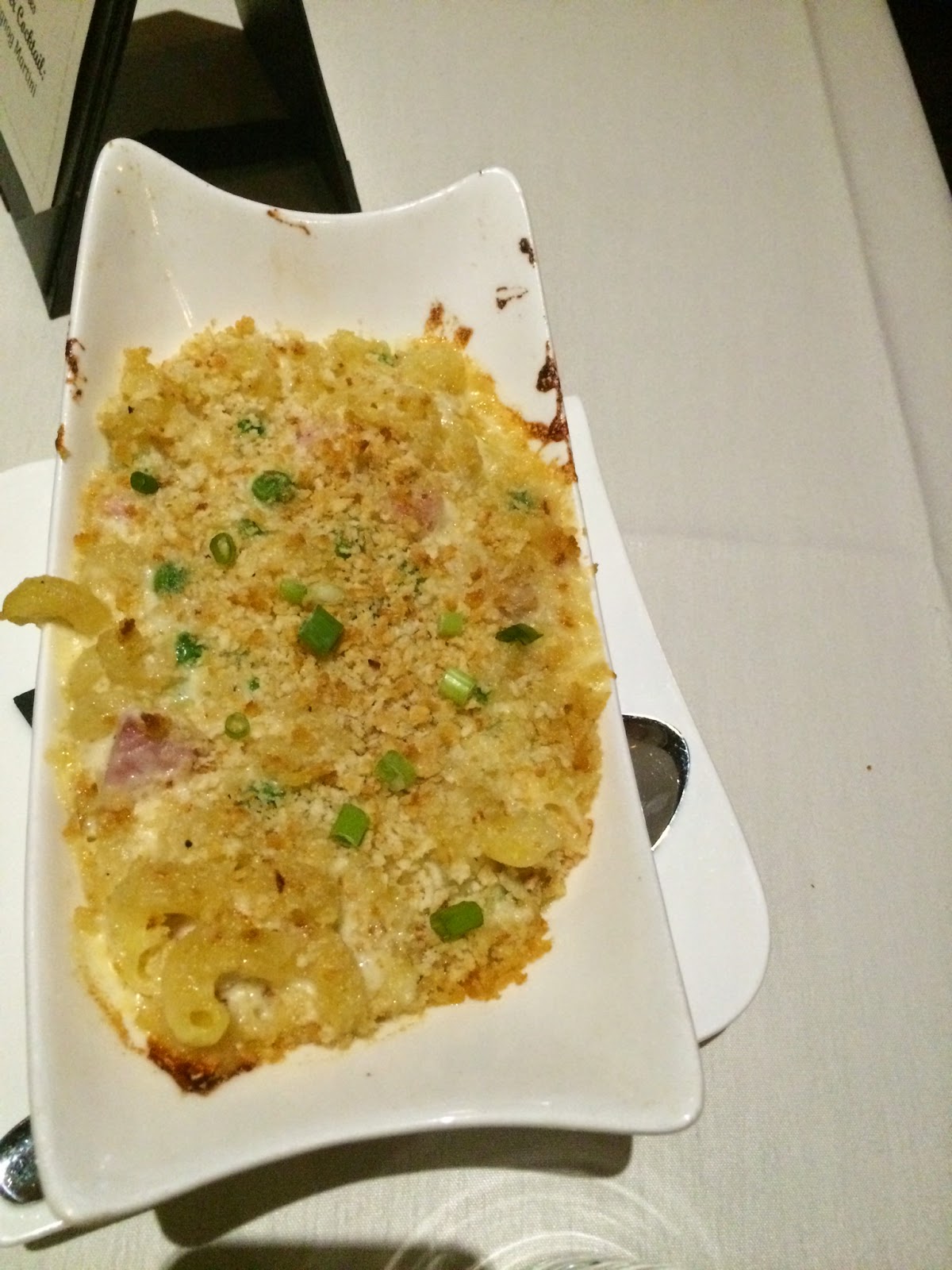 This is a “side for sharing” of Macaroni and Cheese.  It has ham, peas, and breadcrumbs and was pretty fantastic.  I thought all the pasta dishes needed salt, but I probably need to be in a 12 step program for sodium addiction, and there was salt on the table, so no big deal.  I love macaroni and cheese, and yes, I ordered a side of Mac and Cheese with my Tortellini.  I don’t eat white flour normally and so since this was a review I needed to make that sacrifice in the name of…. 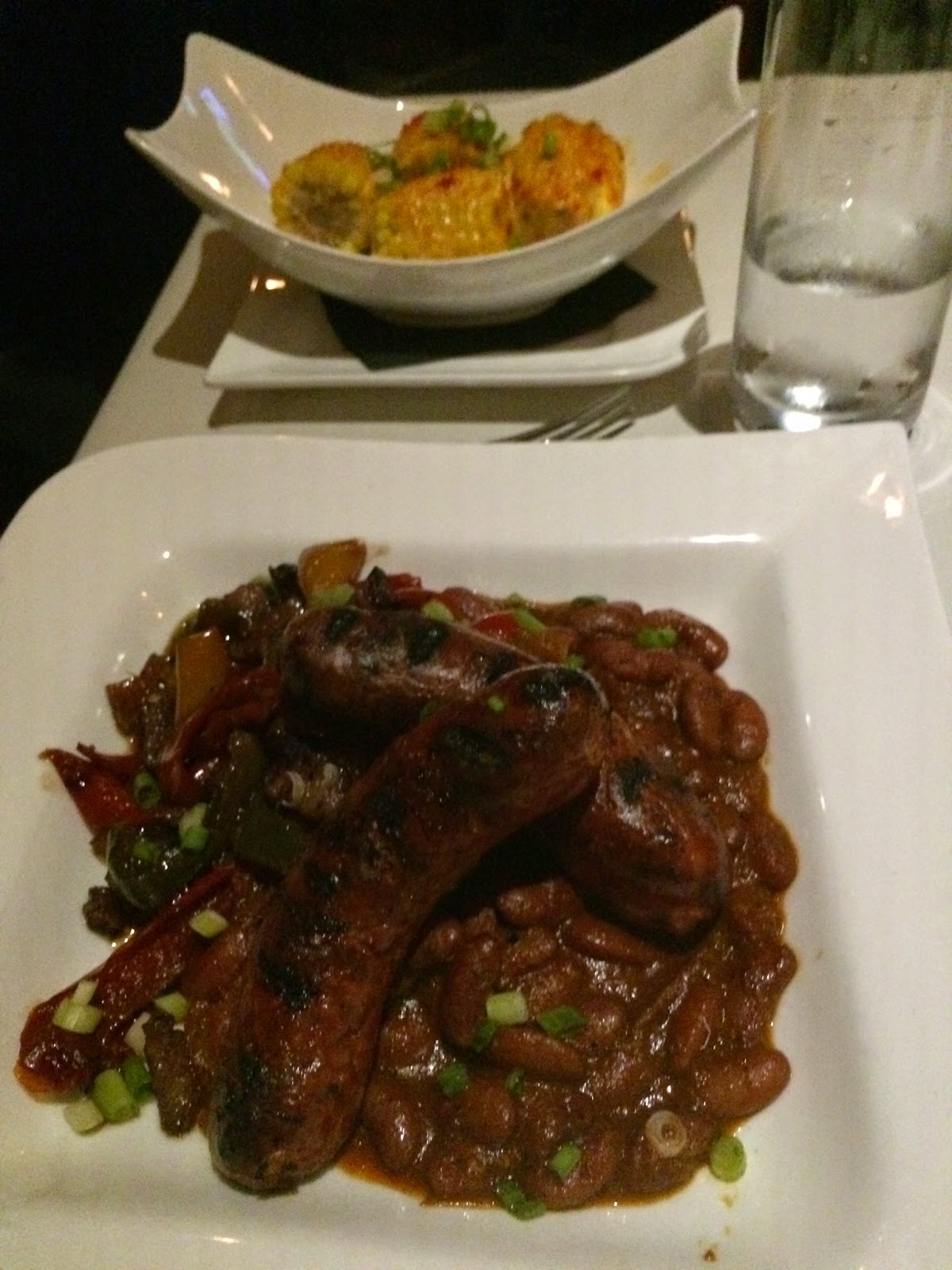 For dinner, Austin got the Pork and Beans 2.0 which was homemade bangers- which he says were outstanding (I tried a bite and then stole another one and I don’t typically do sausage).  The beans were not just Pork and Beans from a can- they were smoky and yummy.  He picked out the pork belly- it’s not his thing- but I’m asking him to describe the dish to me right now (at 8:30 am) and he’s telling me he’d eat it again right now for breakfast.  I’m pretty sure that means he likes it 🙂

Behind that is their crazy cobs.  You need to stop what you’re doing right now and go get some of this corn.  We weren’t sure it’d be great because the corn season isn’t really October, but again, this is for science.  I would go back and order 4 servings of corn and just sit there and eat it with everyone staring at the crazy lady.  It was that good. 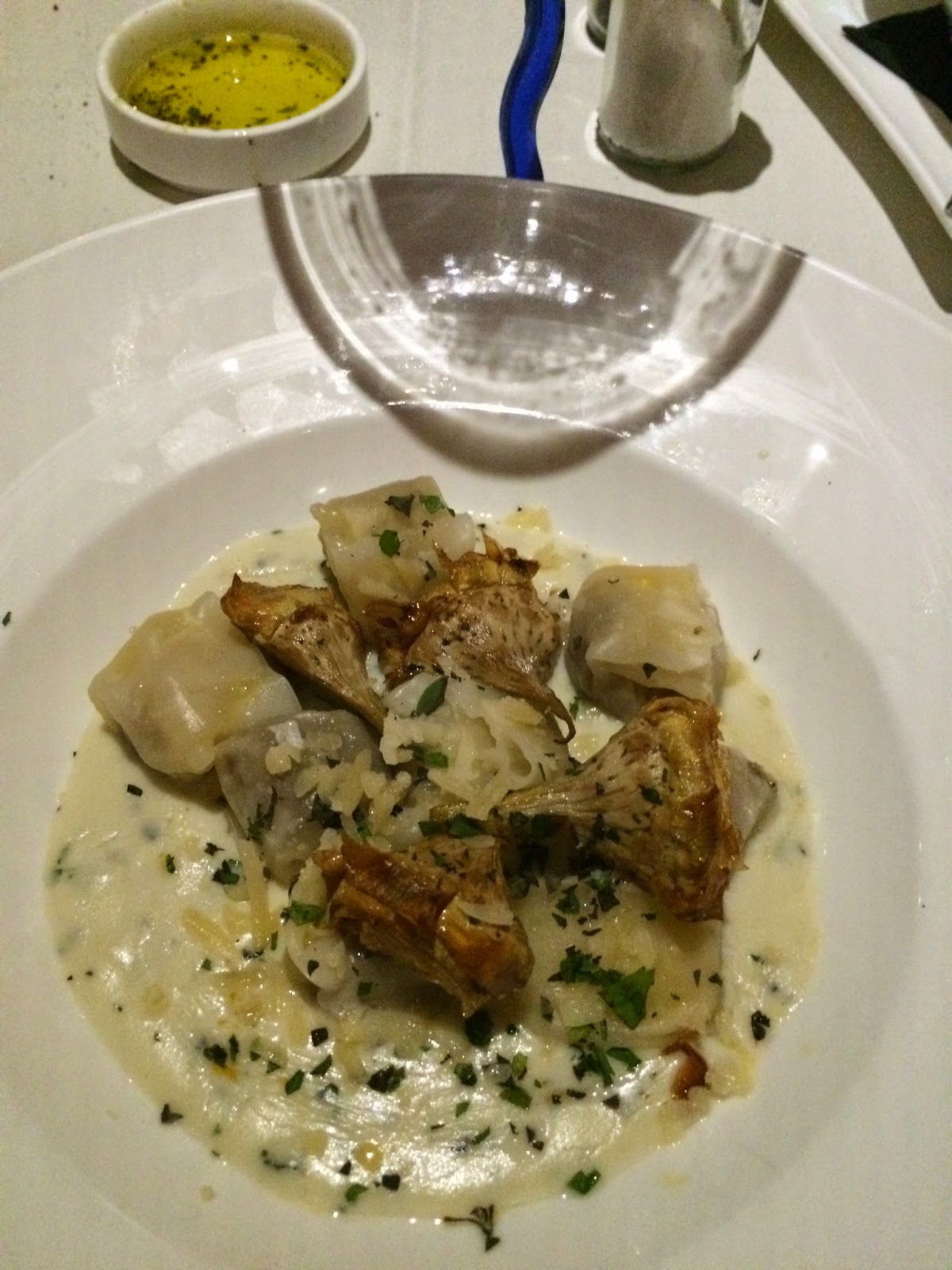 This is my Eggplant Tortellini, which, as I mentioned, I ate with a side of mac and cheese.  It was really yummy and I appreciate when a restaurant can do vegetarian well.  I was a vegetarian for 2 years and sometimes they just throw whatever junk they’ve got at you and assume that if you don’t like meat you don’t like food.  This was not the case here. 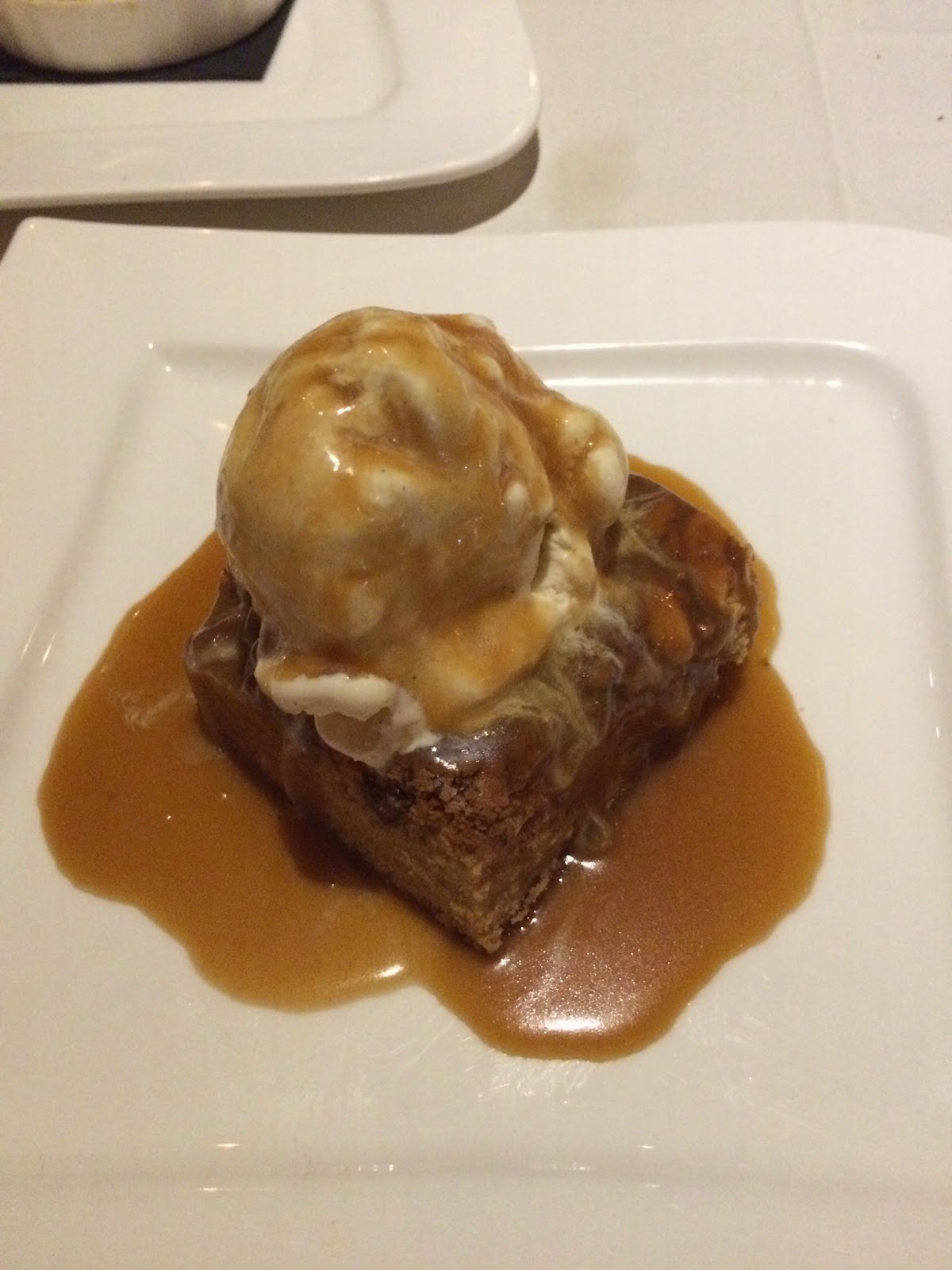 Dessert!! As I mentioned, not getting an appetizer meant two desserts seemed logical.  This is a “congo bar” which was a blondie with nuts and chocolate chips served warm with ice cream and caramel sauce.  It’s really sweet but really delicious! 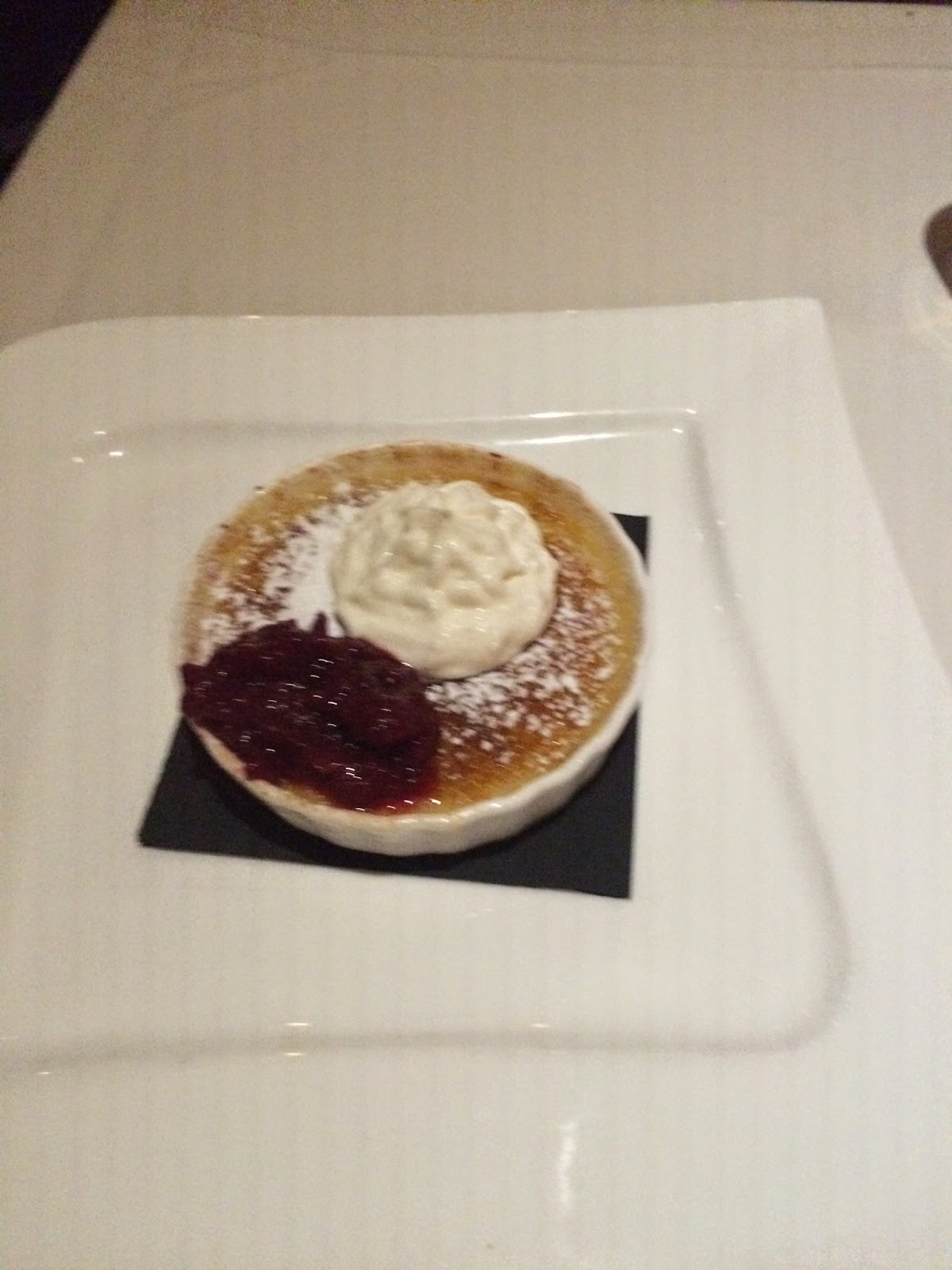 The creme brûlée (which is my hub’s favorite dessert of all time) came with cranberry chutney on it, which neither one of us cared for- although the creme itself was great!

Our dinner total was $102- so obviously Malones is more of an “occasion dinner” although we certainly could’ve not gotten 2 deserts and 2 sides if we were being budget-concious.  They do also have a bar menu and a lunch menu and a Sunday Brunch (which includes something called Stuffed Croissant Pudding, and I’m not sure how I’ve lived my entire life without having that in it).  This would be a great place to take visiting in-laws you need to impress for brunch.
We really liked Malones.  We’d definitely eat there again for a special night out, or for a lunch or brunch at a great location!
I’m really enjoying getting to experience Old Town Manassas, it’s making the move from Woodbridge a lot easier to find a bunch of cool new things to do and places to go- so thanks to Malones for having us out!
__________________________________________________________
We were provided with a gift card to do our review, but all opinions are my own.  Also, you probably shouldn’t really eat 4 servings of corn all at once because I’m not sure what that would do to your stomach, but…that sounds like a science challenge, so if anybody wants to go cob for cob, I’m totally in.