So, there was this Groupon.  It was for Chocolate Tours of DC.

That had to happen, right?
I ended up buying two (they were $60 each for 4 people and the tours are usually $50/person), but had a few people decide not to go at the last minute, so there were only 5 of us, but we had a really great time, so I wanted to share.
We started off with lunch at Peacock Cafe in Georgetown, which didn’t have the same menu it had online for lunch, but did have amazing tomato soup.  There’s garage parking right next to the Cafe, which is nice, as far as I’m concerned, because I don’t like street parking in DC, not that I was driving. Georgetown is a cute neighborhood, although parts of it are under construction right now for road and sidewalk repair, so leave yourself a little time to park.
(You know who else has parking? The hospital! It was a little weird for me to be so close to Georgetown University Hospital and not have some kind of medical testing done…I thought about seeing if my oncologist wanted to join us for chocolate, but figured she was probably pretty busy.)
So.  The tour.
You meet up at the Old Stone House 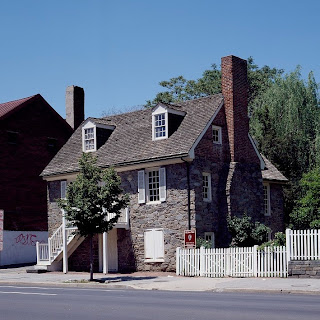 Not actually IN the Old Stone House, but just outside.  There’s not a bathroom there, but there is one across the street in the Nike store.  You’re going to be walking a fair amount for the next 2 hours, so this is good info to have. 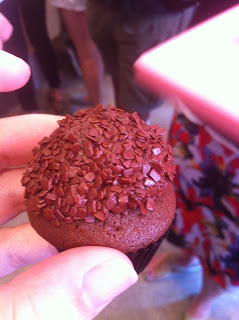 The tour started with a brief (and I do mean brief) history of Georgetown.  The first stop for us was at Sprinkles Cupcakes, which was founded by the woman who judges Cupcake Wars on Food Network. I have to be honest, I didn’t realize there was one in DC!! I knew about Georgetown Cupcakes (from the TV, obviously) and Red Velvet, because it’s by the Verizon Center and the first place I ever went “for cupcakes”.

Let me be really honest for a minute.  That mini-cupcake I’m holding? It may be the most amazing thing I’ve ever put in my mouth.  I usually hate chocolate cakes that other people make because they’re never moist enough, but this was awesome.  I have an MRI on Friday, and I am having that cupcake for lunch after as a reward for laying in the giant plastic coffin for 2 hours.  They don’t give you Dora stickers at my age, so I should get something, right? 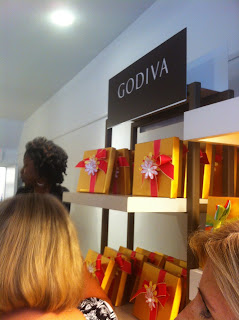 After Sprinkles, we walked over to the Godiva Store, and they gave us samples of chocolate with dried strawberries in it.  The manager at Godiva was probably the best stop all day.  She actually talked to our group about Godiva and their chocolates and was funny and personable.
After Godiva, there was a little bit of a hill to climb.  It wasn’t very bad at all, but one member of our group has a bit of a foot condition and would’ve rather not done it, although with all the stops none of us had any trouble walking the entire tour, and there were people who brought children with, and all of them did well, too.
Our next stops were Thomas Sweet for fudge, Marvelous Market for Chocolate Babka, which we decided would make AMAZING French Toast, Fleurir Hand Grown Chocolates, where we got salted caramel covered in chocolate….
I just need to think about that one again for a moment…..
Then we went down to Dean & Deluca, which previously I thought only existed in movies with Nicolas Cage because, clearly, I grew up in Hoodbridge and until we got Wegmans, we didn’t have anything that classy.  Dean & Deluca let everyone pick out their own amazing looking truffles, and I tried the Vanilla Bean filling, which was yummy, but at this point, I was actually really full and over chocolate! We had one final stop, though, which was Pie Sisters, where they gave us mini chocolate bourbon pecan pies.
By the time we finished, we were all stuffed with chocolate.  It was nice to have the walk between each location, and it was fun to have just a bite or two of each thing to try.  My favorites were definitely Sprinkles and Fleurir as far as actual chocolate, but Godiva for the ambiance, which sounds a little funny, but it was the only place that someone talked to us.
The chocolate part of the tour was fantastic, but the tour part of the tour left a lot to be desired.  We had a lot of fun chatting with each other while we walked, but it would have been nice to have the shops tell us about their facility or their founders or something, or for the tour guide to have told us more about chocolate or DC, or really anything.  The tour guide was very friendly, he just didn’t talk much!

Also, if I was a business owner, I’d give out coupons so people came back.  Something like “$5 off your next dozen cupcakes when you return after your chocolate tour!”.  Otherwise, there’s not really motivation for people to return….but that’s just me.