So, listen.  I tell you guys pretty much everything when it comes to fun stuff to do with your kids.  I’m going to tell you about Great Country Farms because I told them I would and they gave me giveaway tickets.
But I don’t want to, because I want it to be all mine.
I have never left a pumpkin patch/farm feeling peaceful and relaxed. In fact, I usually leave mumbling to myself “one…two…three…one…two..three” from hours of compulsively counting my children because I’m sure they’re going to get lost in the throngs of people.  When we went to Great Country Farms this week, I didn’t have that feeling at all.  Peaceful, open, and very “farm” (as opposed to being very “attraction”) we went on a Tuesday and were among a handful of people.  That morning there’d been a few schools and groups that came through, but by lunchtime when we arrived, most of them were leaving and we had the run of the farm with just a few other families. 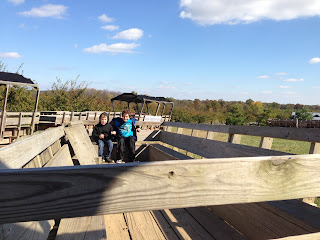 It’s really hard for me to tell you about their hayride without comparing it to the hayride we go on every year…so I’m not going to try.  There’s no hay on this hayride, and there’s benches to sit on! Benches! No hay fever and no legs falling asleep!  This is strictly a hayride, though, around the farm to the field, so don’t expect a show, although the landscape is gorgeous! 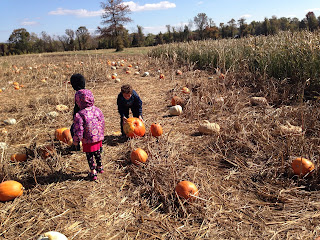 The hayride ends at the pumpkin patch, which includes lots of different varieties from the traditional orange jack-o-lantern to the decorative white and green varieties. The pumpkins are already cut off the vine (I actually think they just scatter them around the corn field) and are sold by the pound. 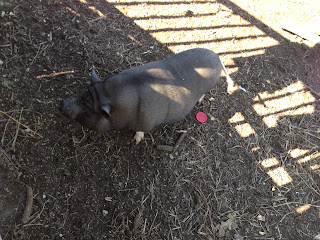 There are also tons of animals around the farm.  Cups of feed are $2 and we fed pigs, chickens, ducks, turkeys, peacocks, horses, cows, sheep, donkeys, rabbits, goats, and probably some other things I’m forgetting.  You can also do “catch and release fishing” in their pond.  Bring a rod. Putt Putt Golf is available for $1 per ball, which is refunded when you bring your ball back. 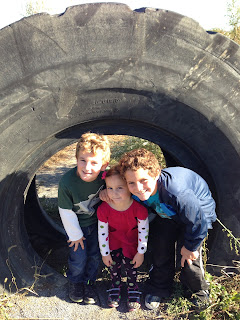 Awww, they’re being cute 🙂 This is the entrance to pedal go-karts, which are really fun, but hard for smaller legs to propel.  I liked that everything was interactive and kid-powered. 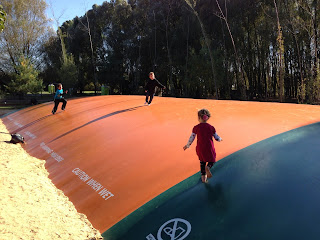 This is a giant pillow.  You bounce and run all over it until someone gets tired and/or runs into someone else.  It’s tremendously fun, and I think that my kids did it for a full hour. 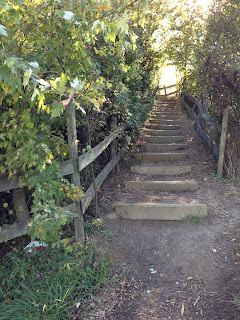 Isn’t this fantastically beautiful? These stairs lead up to a pipe slide down a hill.  The whole farm is very picturesque. 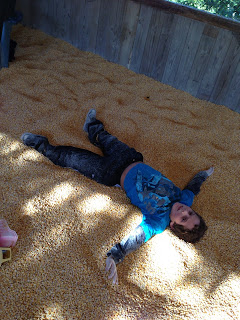 This is a giant play area full of corn kernels.  Your kids will come out covered in cornstarch, but very happy.  We spent several hours on the farm and enjoyed some hot cider on our way out.  They also sell cold cider, local sodas, and ice cream in their store.
In addition to everything mentioned here, there are tons and tons of play structures, a cow train ($2) and the farm also hosts a CSA, or community supported agriculture program. We really enjoyed this farm, and I would definitely go again. It’s a bit of a drive, about an hour and a half from Woodbridge, but you could easily spend an entire day there.  While the farm is open for fall and features pumpkins and a corn maze, they’re also open year round and have fun events for each season. Admission is $10 per child and $12 per adult.  There’s a restaurant that’s open on weekends, or ample picnic table space for those who want to pack.  This is definitely a “highly recommend” in my book- even if it’s not in Prince William County!
____________________________________________________________
Want to enjoy your own idyllic day at Great Country Farms? Enter by leaving a comment on this post! Don’t forget to include your email address so I can get in touch with you! This contest closes on Monday, October 22, 2012. Good luck!
______________________________________________________
PS- Great County Farms provided our family with comp tickets to come and review their farm.  All opinions are my own, and we really did have a fantastic time.  Just ask my husband who slept in an adirondack chair all afternoon.