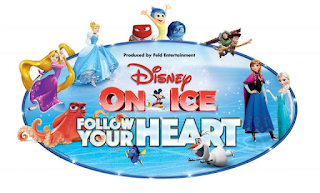 We were fortunate to be able to attend opening night of Disney on Ice presents Follow Your Heart at EagleBank Arena (formerly the Patriot Center) on the Fairfax Campus of George Mason University.  I think I’ve told you guys before that EagleBank/Patriot is my favorite venue- the parking is free, the lot is easy in/easy out, and the campus is pedestrian friendly.  It’s much nicer than going into DC!

If you’ve never been to a Disney on Ice Show, here’s a little of what to expect:

If you haven’t been yet, tickets are available for the following shows:

Want to know what to expect? That’s why I took this crew: 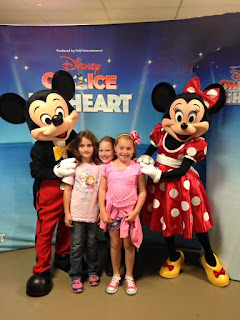 Now two of these cuties are Disney on Ice veterans, but one of them hadn’t been before (at least not at an age where she remembered or even stayed awake for it!) so I got some great varied opinions.

The show starts off with “Inside Out” characters trying to cheer Riley on through a difficult practice.  My daughter played hockey for a season, so obviously this was very meaningful to her as a “girl hockey player” who could commiserate with the struggle 😉 The emotions each think a different type of memory will help inspire her.  Anger picks the Beast from Beauty and the Beast hulking out, for example.  Right before intermission, we see Riley’s big game, and all of your favorite princesses come out, including Tiana, who I don’t think I’ve seen in an ice show before!

The girls REALLY liked the arial work that the skaters do.  I (as someone who used to figure skate) was a little like “Seriously? Spinning around 3 times in the air before landing on a 1/4 inch blade isn’t enough for you people?? Seriously?” but the girls loved it.  Both Ariel and Rapunzel get up, up, up off the ice and fly around- and it is pretty darn impressive!

Now that might have been the girls’ favorite, but mine was DORY! Ever since my brain surgery I forget things sometimes, which makes me really sad, but to try and take the edge off feeling dumb, I started saying “I Dory-ed it” so she’s kind of my spirit animal. I’m trying to remember EVERYONE you’ll see- Inside Out, Beauty and the Beast, Finding Dory, Toy Story, Princesses, Snow White, Mickey, Minnie, Goofy, Donald, there’s a bit of Fantasia, 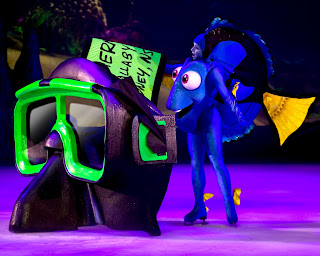 Of course everyone loves Anna and Elsa, and OLAF! The mom behind me was singing so loud and so off key- but she was so happy, so it’s all good! The girls loved the giant ice castle set that expands and makes the whole ice seem like part of Elsa’s magical kingdom. 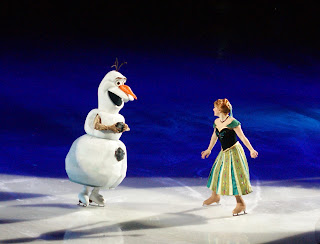 Then there’s a big finale where all the characters come out and skate together, which the girls loved because it’s like Disney Overload and you get to see all of your favorites at once!

If you’re going to go, here are some things you should know:
1) There are some pyrotechnics in the show.  I didn’t notice any of the very small children around me freaking out because of them, and my 8-9 year old girls loved them.
2) There are some moments of darkness during the show, but they are very brief, and again, I didn’t notice any of the small children around me freaking out.
3) There is a definite “best side” to this show.  Usually I feel like Disney on Ice Shows don’t have best seats, but this show, because it uses a lot of background on a screen, has a very specific side that is best.  Now, that doesn’t mean you won’t enjoy the show (we were on a non-best side and still loved it!) but if you’re going to buy tickets, my suggestion would be to get them for sections 108/109 or VIP 108/109.  That’s going to give you a clear view of both the skating and the screen display.  However, again, we were in section 101 and still had a great view of the skating!

We hope that you get a chance to enjoy Disney on Ice presents Follow Your Heart! I know we did!

Disclaimer: I was provided with tickets to this show free of charge, however all opinions are my own and I was not required to write a positive review.