My boys love history, and we use a literature rich approach to teaching it, so the “If You Were Me and Lived in….” series Brought to you by Carole P. Roman and Awaywegomedia.com. We received copies of four books:

If You Were Me and Lived in…Ancient China

I was super excited about this book for my 10 year old because he’s studying the Eastern Hemisphere in History this year, which I never studied much in school, and so I’ve been learning a lot along with him.  His curriculum started with China, so this book fit right in.  The book is focused on the Han Dynasty, which was a sort of renaissance period in China.  Paper, porcelain, and organized government all started during the Han Dynasty.  We ended up reading this book after my 10 year old had finished the study in his textbook about it, which was really great because he was able to reinforce some of the historical study he did with a cultural understanding of how that would translate into a life in a home during the Han period. He wasn’t a fan of the pixelated drawings (you’ll notice this is a theme for us) but the story is well told and easy to read.  We did do some extra internet research to look at things like images of the Spring Festival and Chinese New Year so we could see the dragon dancers and lion dance. We’d never talked a lot about numerology before, and the book talks about how certain numbers and colors are considered lucky or unlucky, so we had a good conversation about how that’s true in a lot of cultures (in Judaism, for example, giving money in increments of 18 because the word “life” has a value of 10 and 8, so it’s considered good life or good luck.)

If You Were Me and Lived in…Ancient Greece

My 8 year old does not like history.  Her brothers live for it, but she does not.  So, the real test was how she’d do with these books! She’s studying ancient history this year (which I happen to think is the best!! Egypt! Greece! All the places I want to go!) and If You Were Me and Lived in…Ancient Greece fit in perfectly with her unit of study. This book took us about a week to finish, reading a few pages a day depending on the content.  My 8 year old reads just at grade level, and doesn’t really like reading, but she did like the content, and was happy to read a few pages if I read the same number afterwards (a trick we use often).  She appreciated that the unfamiliar words were written in parenthesis so that she could say them easily (words like Artemis (Ar-tim-es) or lyre (ly-er). 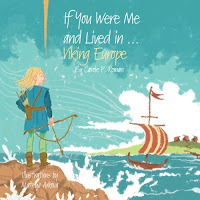 If You Were Me and Lived in…Viking Europe
If You Were Me and Lived in Viking Europe is about a family in 870 AD.  The story follows Knut Ericson.  Vikings take long voyages to distant lands, drank from horns, and wrote in Runic, which you actually get to learn in the book.  The book explains to you what a town would have looked like, names that you might have been given, social classes, and the roles each member of the family would have played.  My boys especially liked the fun activities that Vikings participated in- which they decided they needed to go do as “enrichment”- things like throwing spears, shooting bows and arrows, and throwing stones as far as they could.  The book also includes a little bit about the various gods that Vikings believed in, but they didn’t include any details and since my boys are into mythology we did a little library research to find some of the actual stories. The book was a done in a day for us, I know some younger children did these over weeks as a unit study, but for my 10 and 12 year old, it was a fun, quick read- even when they went outside to launch rocks.  We weren’t huge fans of the pictures, which look a lot like something from MS Paint, but I think maybe the intention was for them to look like they’d been hand-drawn by the child in the story, so I get why they did them that way.

if you were me and lived in…Colonial America

This was our last book and we read it just for fun in the car on our way to an away game.  The kids preferred this style of illustration- it reminded them of a cartoon they like to watch.  Strangely, my younger two didn’t like that most of the pages were white type on black- they said it was “confusing their eyes” but I didn’t have an issue. This book focuses on a family that has immigrated to Colonial America and must survive the harsh winter, build a home, and start a life in a very different place than England. The first Thanksgiving makes an appearance, so it might be a fun book to read over the upcoming holiday either in your school, class, coop, or home.

These were fun to read books, and reminded me of another series based on if you lived through a particular experience- but with less focus on the gross aspects and more focus on actual lifestyle.  We enjoyed them, and think you would, too.