I love date nights.  I think they’re really important to keeping your family emotionally healthy.  I know some parents don’t like to leave their kids or don’t have a sitter (although there are lots of options for kids nights out on our calendar!) but I really think it’s worth doing, even if it’s initially uncomfortable to leave your babies.  Heck, I know people who pick up grandma and grandpa from the airport, drop them at home, and don’t come back until Monday.  #ByAnyMeansNecessary.

I also really like to keep it interesting.  Dinner and a movie is awesome, but if we can do something different, then I’d like to do that 🙂 Last weekend, we checked out Bobby McKey’s with some friends.  I’d never been to a dueling piano bar before, but it sounded like fun!

We paid extra to have a table, and I’m really glad we did. I figure that the $40 we spent works out to be the same as we’d pay at the movies for tickets and popcorn- and the bar stools/standing room only didn’t look as comfortable. If you have a special event you can even get a light-up table at the very front.  We had to be there by 8 to ensure they didn’t give our table away at 8:30, we actually go to National Harbor a little earlier and enjoyed walking around, and a member of our double-date party ate some hot sauce so hot that he had to sign a waiver.  He got a sticker- we were all very impressed!

When you check in, you’ll of course need your ID, and then if you’re sitting at a table you get glow necklaces!

(No joke, I was excited about this! My kids get these all the time, but I never do! Yes, yes, I know I’m 30 and they’re in Elementary School.  You trying to make some kind of a point?)
I was a little worried that we were going to be the oldest people there, but there were some younger folks doing bachelor/bachelorette parties (probably just barely making the 21 cutoff) and there were people in their 70s and 80s there, too! Service isn’t exactly quick or attentive, even at the tables, but we did okay.  I am always the DD for everything, so I had a coke, which sat empty the vast majority of the time, but my tablemates ordered a beer tower that lit up on the top (so everyone knew you ordered it!) which was $40- although I don’t remember how many drinks that worked out to being for them- so their glasses were refilled easily.

Next, two pianists came up and got things rolling.  They don’t really “duel” in any way- they just play songs requested by people on napkins.  You write your request on a napkin, put it on the piano with a tip, and the bigger the tip the sooner it plays. At one point, they’d accumulated a few requests for “Let It Go” and offered to stop if someone topped the $16 they had to play the song.  “$17 bucks can save you all!”, but unfortunately I didn’t have cash- so that was probably the low-point of the evening for me!

There are a total of 4 musicians who alternate in throughout the night in groups of two, and when they swap out, the 4 of them play together, including drums, keyboard, and even a really great electric violin moment when one of the pianists played “Devil Went Down to Georgia” standing on top of the baby grands.  I really enjoyed myself! We were laughing and clapping and singing along- and most of the songs were classic hits that everyone knew. Oh, and, there was a confetti cannon! Whooo!

I will definitely say that the show is R-rated. There are two mirrors behind the pianos that you can pay to have a “Phrase of the Night” written on in dry-erase marker, and with bachelor parties in full force, these phrases were definitely a little raunchy.  They also sang a version of “It’s a Small World” that I had NEVER heard before for someone’s birthday- and if you’re easily offended this is probably not the place for you. (In fact, since I am not a photoshop-er, be sure not to read these mirrors!) 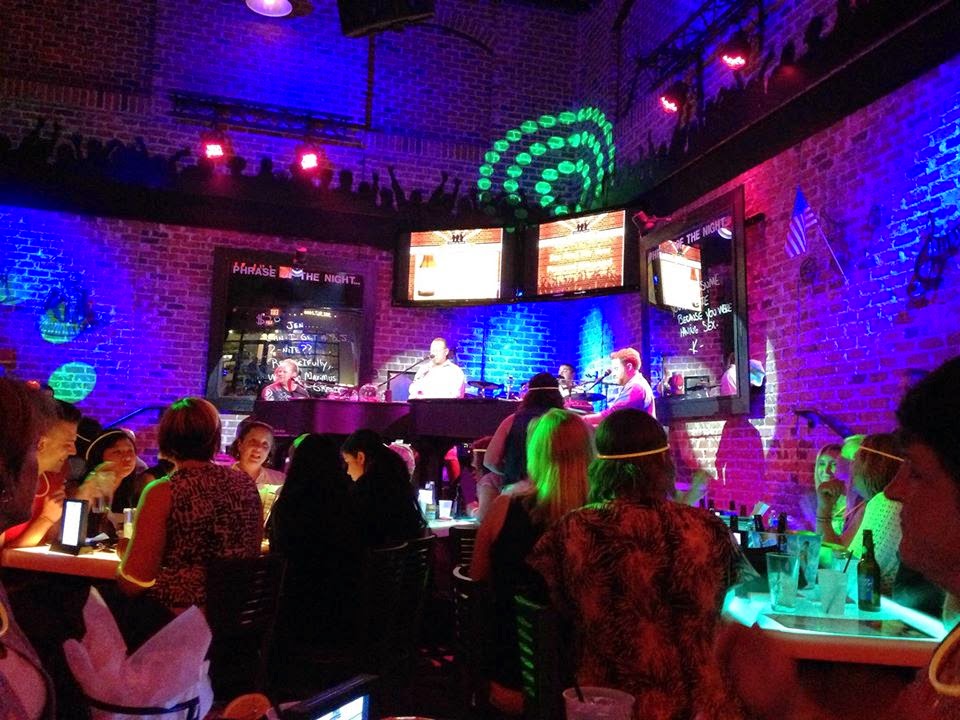 I thought it was hilarious- mainly because the birthday boy was such a good sport about the whole thing. Also worth noting- it’s a bar and there’s live music, so obviously things are a little loud for conversation, although we were able to talk between sets (loudly) with our friends.

The piano players were all really talented, the humor kept going all night, and we had an excellent time.  We all stayed out way too late, especially since the couple we went with also had swim team in the morning!! But, it was well worth it for a memorable night out! I would definitely go to Bobby McKey’s again- we had a blast!

(PS- they also do Kids’ Days- which would be fun to try as a family!)