Guys, we’ve been friends for awhile, right? And, if any of you were serial killers or something, you’d have figured out my kids’ names already, because it really wouldn’t be hard.  It’s mentally taxing for me to keep referring to them by ages or birth order, so let’s just get real about it. 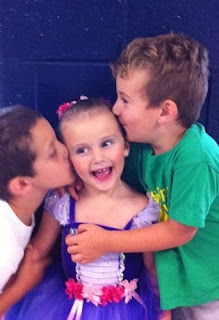 This is Savannah.  She’s 5 and she enjoys pink, sparkles, soccer, math, kicking butt and taking names, swimming, and ice skating.  She does not enjoy dresses, tights, mosquitos, or when people do not realize that she is Lord and Master of the Universe.  Especially her brothers- they should know better.

Savannah checked out the Ice Stars Fun Camp last week, and I thought I’d share her feedback with you.  We thought about doing a video, but then I realized that not everyone speaks rapid-fire five year old, so typing her responses would be easier.

So, kiddo, tell me about camp.
Camp?  Camp was good.  I was just awesome and I skated and one day we got to do the slip and slide. Daddy let me buy lunch from the cafe and I got chicken fingers AND tater tots, which is a lot of food, but he let me do it.

What was your favorite part about camp?
Um, we did lots of different stuff. It was all good. I made a t-shirt, do you want to see it? (this is another good reason not to make a video- she just runs off.  For the record, I’ve seen the tie-dye shirt at least 20 times)

Was there anything you didn’t like?
I thought we were going to skate too much, but we didn’t, we just did it more times.  And now, I can skate while I jump.

I’d imagine you have to be a teenager.  Would you go back to camp again? Should I tell people their kids would like skating camp?
Oh, sure, I’d go to all the weeks.  They can come, too. We’ll have fun.

So, there you have it.  Savannah liked camp, and thinks we can all have fun together.  I was a little nervous the first day because it looked like many of the kids were older than her, but she informs me that this made it more fun because she got to hang out with the big kids.  Also, they mix the hockey camp kids and the figure skating kids together during some parts of the day, so there are plenty of people to play with. You can pack your child’s lunch, or they can purchase lunch from the rink cafe.  Camp runs from 9am-5pm, but there is a before/after care option if you need a longer day.  For us, since we’re not typically a daycare family, Savannah SLEPT after camp each day.  She also had a wicked crush on one of the hockey coaches.  In any event, she had a great time.  The mixed age group was probably my biggest concern, but she seemed to have a great time and came home talking about friends every day, so it worked out fine! Each week there are different off-ice activities, if you need to know about anything (like bringing a swimsuit for the slip-n-slide or a shirt to tie-dye) they’ll let you know.  Also, the kids are on the ice several hours a day, but they break it into chunks so they’re not bored or over-stressed about skating.  There is some outdoor play time, so we tried to dress in light layers so Savannah would be comfortable on the ice and outside.  It’s a challenge, but you can do it 🙂 Also, there’s a form to sign if you want to leave sunscreen.