Previous St. Patrick’s Day Shenanigans I Have Had

This year I’ve been a little preoccupied with Silver Sparkles and I haven’t done anything fun, but if you’re still looking for some St. Patty’s ideas, here’s what I’ve got in the “blast from the past” department.

1) Leprechaun Room Raid (2012)
“We’re neither Irish, nor Catholic, but Logan’s favorite color is green and Riley spent all his free time building “Leprechaun Traps” after being jealous about the treats and mischief at Savannah’s preschool.  I decided (at 12 am, which is when my best inspiration always strikes) that I’d go with it, so, here’s what I did.  The leprechaun mischief:  This involved a skein of yarn, some tape, and a package of green balloons.  Luckily the kids are having a “sleepover” together tonight, so I only had to sneak around one room!!  In the kitchen I drew a picture and threw down some glitter.  I have 0 artistic skill, I know, so no laughing at my leprechaun!! Also on the table are goody bags for the kids.  Each kid got a shirt, bracelet, 7 Up, crayons, gum, granola bar, lollipop, and jello.  The boys have flat green shirts and green “lucky” bracelets.” 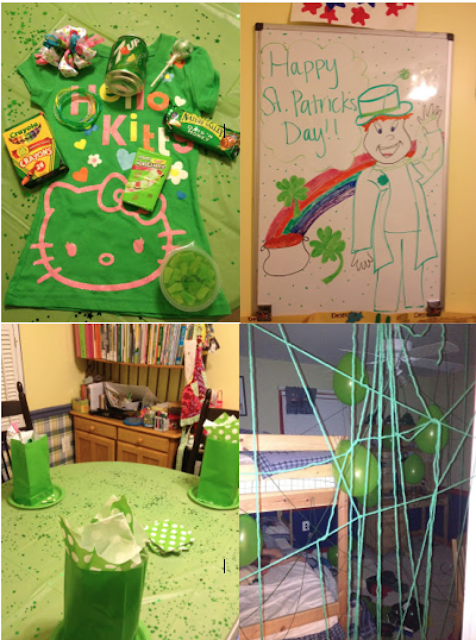 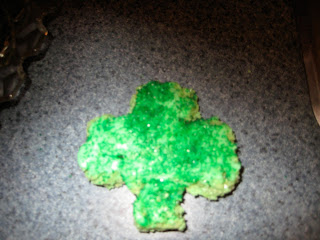 (Did you know that you can dye your rice krispies treats any color you want by adding food coloring to the melted marshmallow goo? You can. You can also cut them and frost them to look like clovers. With decorator sugar. FYI.) 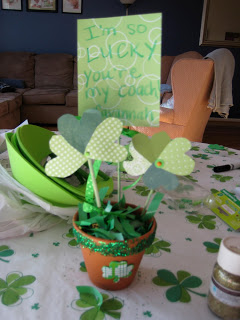 “These are a little more involved, but we did them over two days. So, here goes. First the supplies. You will need to assemble some glue, glitter, a terra cotta pot, your green scrapbooking paper scraps, scissors, bamboo skewers, a green crayon, tape, floral foam, small brads and ribbon. o, first things first, paint a line of glue around the top edge or rim of your pot and roll it in glitter. We put our floral foam inside first. Also, if you’ve never tried Martha Stewart’s glitter- you totally should. So, next, paint a little glue on your floral foam (or sqeeze it out, whatever floats your boat) and let your baby cut up a ton of ribbon to be grass. We also added some confetti. That’s optional 🙂 So now we have a glittery pot of grass! Hooray! Next, cut up your scrap papers into hearts. You’ll need 4 as far as I’m concerned, per 4 leaf clover. Savannah preferred 3 and Logan enjoyed 5. But I say 4. Either way, it was a good way to practice counting to whatever number. Line them up in circular formation, and attach them one at a time with the brad. We also had a little circle plastic embellishment that came in our brads. I had run out of green by the time I decided to take this picture, so there’s an orange one. True story, the flag of Ireland is Green, Orange, and White. I’m an unintentional GENIUS 😉 Fabulous! Now, peel your crayon a little so that you can use it on the side and color the skewers green. I’ll wait. Done? Excellent. So, now you’ll want to either glue or tape them to the back of your shamrock. I’m not very patient, so we prefer tape. Once you’ve assembled them, stick them into your floral foam. At the end, we add a square piece of paper to a skewer and write “I’m so lucky you’re my teacher” and the child’s name. Or, in Savannah’s case, Coach, since she has a swim coach, but no teachers yet. 🙂 Although this would be cute for a Sunday School teacher, too, no? People tend to forget them, and they need love, too!”

4. Limericks and Graphing Marshmallow Lucky Charms (2015)
I should note that as the kids get older (and by kids, I mean “the boys”) things get less cute at my house.  This “adorable” Limerick exercise ended up being about a dead guy.  Thank you 5th grade boys. 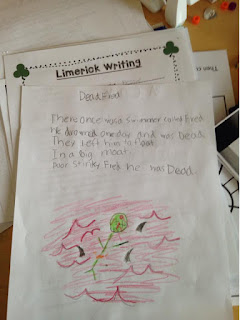 We also graphed Lucky Charms.  I made them glue them down and told them they couldn’t eat them (I had extras as a treat) but the boys ended up licking theirs after they were glued down to show me who’s boss.  Thanks, again, Y chromosome! 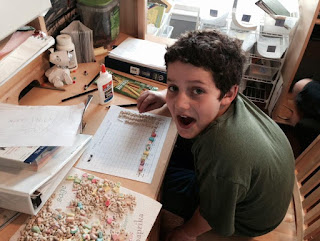