If you’re trying to knock states off your list, you can get a few done in just a few minutes if you stay in Cincinnati. 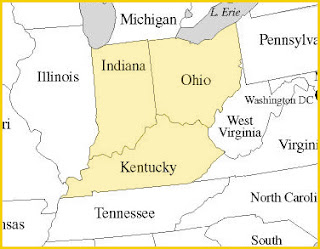 Bam.  Three states! My mom and I actually visited this same area when we went to hang out with some great friends of our family who were staying at the Ronald McDonald House while their daughter had some very extensive surgery.  There’s a great aquarium, a zoo they apparently enjoyed, and there’s some really really good ice cream.  There’s also White Castle, which I personally will leave to Harold and Kumar because, well, I think it’s gross.  I’m sure many of you will disagree, but this is my website and I get to make outrageous claims about fast food institutions.  So there.

This time, we came to Cincinnati straight from the Creation Museum in Kentucky.  We figured that after a hard day museum-ing (and sitting in the car on the way from West Virginia following the STRANGEST Google Maps directions ever) the kids would enjoy something active.  Enter, our hotel. 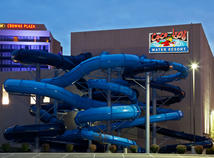 (Photo Credit: Coco Key)
We stayed at the Crown Plaza Cincinnati North, which is attached to a Coco Key Resort.  I originally found this hotel on Groupon, and while I couldn’t get a stay the night we needed, I did get our park passes from Groupon.  (Travel Tip: Check the deal sites for the city you’re visiting! You might score a great deal!).  I got a deal for 4, which was perfect because people who aren’t swimming don’t pay, and I am not water-slide material right now.  After checking in, we ran the kids over since they would only have a few hours before the waterpark closed for the night.  There’s the large slides, which go outside the building before dumping the rider back inside, a larger play structure surrounded by a lazy river with a giant bucket that dumps water at regular intervals, a lazy river, and a smaller play structure for younger kids.  There’s also an arcade.  Life jackets are available, and there’s also a bar and food available for purchase in the waterpark area.

(Photo Credit: Coco Key)
The kids had a really great time, and older children will be able to enjoy this waterpark without too much worry about their swimming ability (all my children are swimmers, but you wouldn’t have to be to have fun here).  My mom noted that the steps were kind of grody- that waterpark lots of people feeling.  Everyone had fun and we stayed until the park closed, which was about two and a half hours, and my kids probably would’ve stayed longer.  Well worth the money for them to get out their energy and play like crazy!
Tickets are $25 at the door, but do check online, both at deal sites and on the Coco Key page, as right now they’re running a special for half-price tickets when you purchase online.
Since we didn’t feed the kids dinner so they could play as long as possible, we took them to dinner after showers at 10pm.
In case you didn’t know it, I’m running for mother of the year.
We decided to try Cincinnati Chili.  Not my favorite, either- it’s got cinnamon in it and while I’m a fan of cinnamon in my savory food (see: Lebanese Taverna‘s Chicken Fatteh, which I make a mean at-home version of) the kids liked it and everyone was a huge fan of Pleasant Ridge Chili, especially their Gravy Fries.  These sound horrible- they’re fries with cheddar cheese and house-made gravy on top. 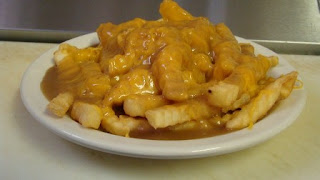