Ode to a Brain Tumor

**Fair Warning: While I typically try to stay neutral with you guys, I can’t tell this story without sufficient mention of God, grace, and humility.  It would be a lie.  It’s my best attempt at toning it down for you, though.  Take it or leave it 🙂  Many of you have asked about what happened/is happening, so here’s as condensed of a version as I can manage.

Hello, my name is Kristina, and I had/have a brain tumor.  It’s complicated.  Let’s back up.

After jogging slowly in the Cherry Blossom 10 Miler last April, I was feeling pretty awesome.  While I wasn’t fast (just ask my amazing friend Stacey who power walked next to me) I had worked hard to get to 10 miles! I felt healthy and awesome! Then, I started having the occasional headache.  By the time we went to the beach in June, I couldn’t lay on my stomach because it caused head pain.  By July, waking up every morning felt like hitting a brick wall.  By the middle of July I was at the local ER in the middle of the night because I thought I was having an aneurism.  I had three kids without any pain meds, and I was crying on the floor- clearly I was either having an aneurism or a stroke.  The doctors told me that I was having a migraine, and it sounded like they were chronic for me.  They gave me some different medications and told me I’d need to figure out what worked for me.

The pain was increasingly difficult to deal with, but I tried.  I tried no caffeine, no spicy foods, more sleep, over the counter, massage, chiropractic care, essential oils, nothing helped.  Christmas Eve I walked out of service in tears because the pain was overwhelming.  The first week of January, I was helping my son brush his teeth to prepare for hockey, and I passed out.

I spent the next week in agony in bed.  My mother was, thankfully, out of school (she’s at Mason, and I am so proud of her!) for winter break still and came to take over school for my children.  The following week, a new neurologist was able to see me.  Her name is Sheila Myers, and she’s with Manassas Neurology Associates.  She took a great deal of time examining me and listening to me.  It was the first time I felt like someone was really taking me seriously.  Based on some family history, she decided to rule out a blood clot as a precaution, and Prince William Hospital was able to fit me in for an MRI the following week.

As much as it drives you nuts when your doctor makes you wait for test results, you don’t want them to call back within the hour.

We gave ourselves 24 hours to totally freak out, and then I decided that the whole idea of what I was being told was happening was entirely too much for me to carry, and I was going to let God do it for me.  I reject the idea that God would give anyone an illness to “teach” them anything, but I believe He’ll walk through it with you.  So that’s what I did.  My level of calm and lack of tears freaked out more than a few doctors 🙂

The next week I was at MedStar Georgetown University Hospital meeting with Dr. Vikram Nayar.  He ended up admitting me for a few days (this is when I first told you guys I’d be out of commission with no details).  We were there for 3 days and I had my first 2 hour full spine full brain MRI with contrast.  It was horrible.  I had NPR on for 2 hours talking about Hilary Clinton making another presidential run.  My brain is a red state.  😉 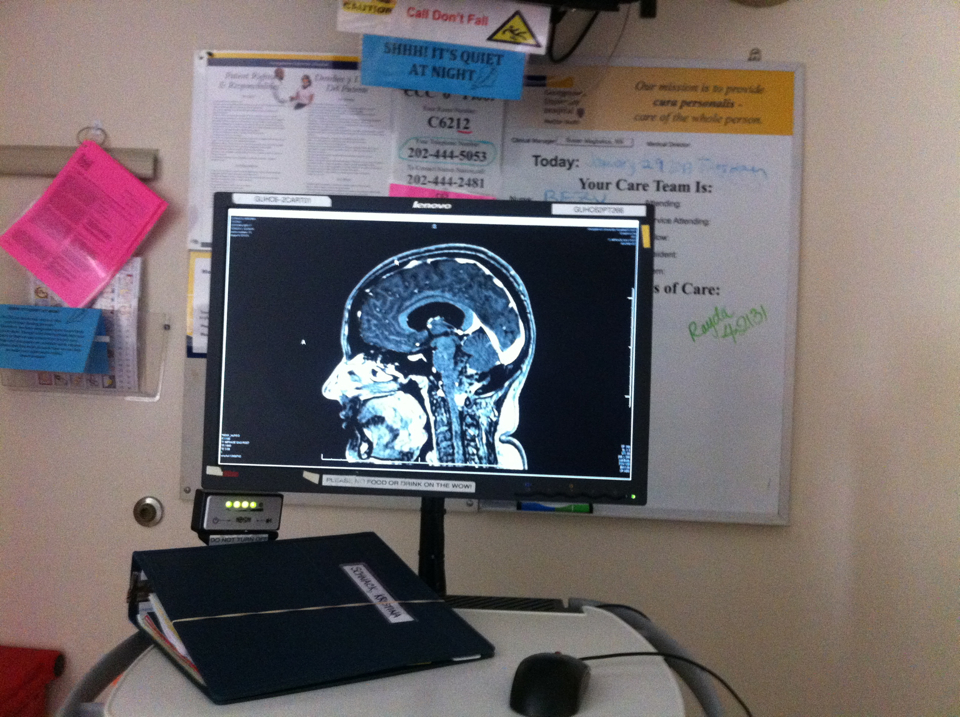 Here’s a high-tech iphone photo of what they found.  All that white-looking stuff around my brain stem (near the middle around neck-height) was tumor.  On Thursday we had a second opinion at Johns Hopkins.  I’d prayed really hard for discernment about a surgeon and while JHU is an amazing facility, for us the whole appointment was not at all what we wanted.  My husband even left his laptop in Baltimore and had to go back for it after we’d driven home! We felt very confident about our choice of surgeon, even more than we had walking out of Georgetown after the admission.

The next Wednesday, February 6, I had sixteen (that’s 16) hours of brain surgery to remove a tumor the size of a citrus fruit from my 4th ventricle, C1, C2, and around my brain stem.  So many things could have gone wrong or been impacted, and while I walk slowly and still feel wobbly and have a few other minor (in the grand scheme of things) complaints, I walked out of the hospital eight (that’s 8) days later.  Well, they tell me it was eight, I spent the first several in the ICU on some incredible narcotic pain killers.  From the amazing women who came to pray and sing hymns with me the night before my surgery to the people who volunteered to pray in 15 minute increments all day long on the day of my surgery, to say that I was covered in prayer is an understatement, and to say those prayers were answered in great and powerful ways is completely inadequate, but it’s the best I’ve got. Dr. Nayar is also completely awesome, I won’t detract from his skill level, either! 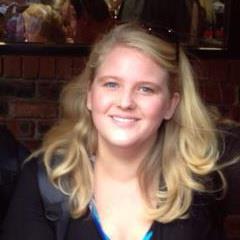 (To the left is me with hair- somebody got a nice wig, I hope!)

Oh, and, I donated my hair! I’ve always wanted to, and keeping a
sideways mohawk (they needed a drain in the front and the incision up
the back) seemed silly.   A huge thank-you to the wonderful people at Statements Salon in Lake Ridge whose manager came out to my house (because if I was going to cry I didn’t want to do it in front of everyone) and mailed my donation off to Locks of Love for me, too.  (Not because I said I’d give them a shout-out, just because they were nice people.  I don’t think they know who I am from Adam)

For the record, I cried at the prayer meeting that came right before the haircut, but I didn’t cry about the hair.  I am so glad that someone else will benefit from my “crisis”. For the record, if you’ve never had hair short enough to sugar scrub your head, you are seriously missing out.

So, where are we now? Well, I am incredibly blessed.  We have had so much help and love and support, and it’s completely humbling.  People we don’t even know have brought meals.  Friends and family have come in from out of town to help with children and hold our hands.  We’ve had access to absolutely the best possible care we could have EVER asked for.  However, recovery has been humbling in other ways, too, such as the fact that walking to the end of the block is now a struggle, or that one of my exercises at Physical Therapy is “sit down in the chair, stand up, repeat”. I am slow and unable to be the mom I want to be right now, but thanks to the amazing people that God has placed in our lives, my children are happy and well-loved.

My type of tumor is called an Ependymoma.  It’s common in children, but very rare in adults, especially adults in my age group.  I had a complete and total removal of all the visible tumor, but there is a very high probability the tumor will return in a few years without radiation treatments.  Even then, it’s fairly common for them to come back in 7-10 years.  However, with oncology research the way it is, progressing rapidly, buying 7-10 years means access to better treatments if it comes back.  So, next is radiation, the major side effect of which is incredible exhaustion.  We’re opting to go to Duke’s Preston Robert Tisch Brain Tumor Center, which was not an easy choice, but is, again, a discerned and correct one.

I would never have asked for this, but going through it, I wouldn’t take it back, either.  Taking a very clear look at your life can be a great way to realize you don’t regret things (like staying home with your kids) that you have questioned in the past.  I see now so many little and big things that made us uniquely prepared for this situation, that show me that God prepared us for it- from having our children at a young age (spinal radiation was on the table, which would have left me infertile) to choosing to raise our family in an area that gave us access to incredibly doctors, to my Physical Therapist baby brother having a certification in working with patients undergoing radiation and chemotherapy, my life is covered in fingerprints of a bigger plan at work.  Sometimes I’ve felt like I don’t matter, and being surrounded by people willing to go out of their way to help my family makes me feel like a piece of a greater community.

I even learned that my husband loves me way more than Edward loves Bella.  I learned that for a fact. Without one complaint or gripe or call for recognition, the man has coordinated my care, interviewed my doctors, and advocated for me when I was too weak or too drugged to do it myself. Even though I was balder than him for a few weeks 😉

So….I feel like there should be a point here. If I had to sum up I would say:
1- Listen to your body, and don’t be afraid to question a diagnosis that seems dismissive or wrong.
2- You matter to so many more people than you know.
3- Even in a really horrible situation, there are so many ways to see how blessed you are.

(Disclaimer: this is not medical advice.  I named my doctors because so many of you have asked, but you should make your own medical decisions based on your own instincts, research, and condition, not mine)