A girl named Sophie encounters the Big
Friendly Giant who, despite his intimidating appearance, turns out to be a
kindhearted soul who is considered an outcast by the other giants because,
unlike them, he refuses to eat children.” (IMDB.com) 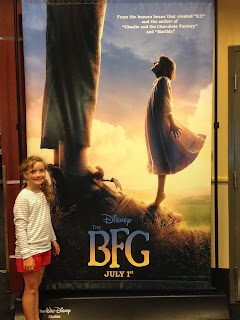 My 9-year-old daughter squealed with
delight and did a cartwheel when she found out we were going to see The BFG. Last
fall she read this book by Roald Dahl (1982) with her reading club at school and
declared it as her favorite book. She loved the nonsensical words used by the
giant and the partnership between the big friendly giant and the young orphan heroine.
She has been waiting with much excitement since then for this movie to be
released! Thankfully, she was not disappointed.
My
daughter “loved, loved, loved” the
movie, even though she said there were various aspects different from
the book.
She kept saying “this part is going to be really funny” and it usually
was,
indicating that fans of the book will not be disappointed. She giggled
often and could not stop talking about the movie on the way to the car.
The
next day she told anyone who would listen about it.
Overall, I also really enjoyed the movie.
Knowing Roald Dahl stories can be a little dark (the unfriendly giants in the story
are feared because they eat children), I was pleasantly surprised. There are
some potentially scary moments for younger children, but the whimsy of the movie
reduced the intensity of these scenes. At times the movie will feel slow, but I
found it a wonderful opportunity to fully enjoy the marvelous artwork and
glorious details.
Children under age 13 will especially enjoy this fairy
tale, and it will put a smile on the face of their parents. The littler children
may be scared by the giants, but the scenes are short. And, as with most fairy
tales, (potential spoiler alert) everyone lives happily ever after. This is a
movie I plan to purchase own one day and watch again. It has already become a
family favorite.
Just the facts: “The BFG” opens in theaters
on July 1, 2016, the year that marks the 100th anniversary of Dahl’s birth. It
is rated PG “for action/peril, some scary moments and brief rude humor” and is
1 hour and 55 minutes long. 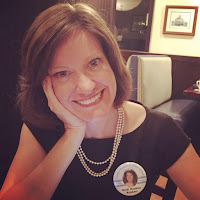 Thanks so much to my sweet friend, Heidi, for reviewing The BFG for me.  Heidi is a strong and patient mother of two (ages 12 and 9), follower of Jesus, and fan of peanut butter and chocolate and herbal teas of all sorts.  She’s the best kind of friend to have, and I’m so glad she and her little girl could enjoy this media preview opportunity.