Friday night, my family was invited to come and check out the final dress rehersal for “Miss Electricity” at the Workhouse Arts Center in Lorton (close enough to Woodbridge/Lake Ridge “for government work” as it were).  We had a fantastic time! 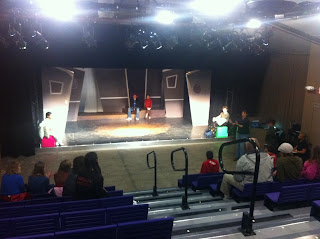 Miss Electricity is about a 5th grade girl named Violet who thinks she needs to break a world record to “be someone”.  The popular kids at her school reinforce this by calling her “cabbage” or “nobody”, and even Violet passes this behavior on to her friend, Freddy, who she claims to be “just her assistant”.  That all changes, however, when Violet is struck (twice!) by lightening and gains “super powers”, or does she?

There are some great themes in this play, including that you’re good enough just the way that you are, that how you treat others matters (especially moms and assistants), and there are some fun educational tie-ins, to.  Violet is getting ready to take a test on States and Capitals, and the show is peppered with them.  One of the characters LOVES to spell things, and Freddy’s interest in Greek Mythology makes a small showing, too.  These could easily tie in with a unit study, or one of the themes of the play could be used for an anti-bullying or “free to be me” message. The director, Caren, has even put together a study guide that ties several of these themes together, which is available for students who come to see the show.  SOL-based field trips can be arranged by calling Caren at 703-584-2900.

Weekend performances run from now through February 25th, but weekday performances can be arranged for groups by calling the box office.  Don’t forget to identify yourself as a PWC Mom’s Reader when you call to book your tickets– we’ve arranged for you to get 25% off your tickets, making tickets for PWC Moms $9 for adults and $6 for kids. Hopefully, this will help you enjoy the show even more!!

All three of my kids greatly enjoyed the show (almost 4, 5.5 and 8) but I would say the target audience is really between 2nd and 6th graders.

A few notes of possible sensitive items to be aware of (as always, I over analyze here because I know we have some parents that are very sensitive to things some of us wouldn’t ever consider).  First, there is a scene where Violet talks to Athena.  This could be considered praying, and if you are sensitive to those as a religious family, you’ll want to be prepared for it. Additionally, there is some “thunder” used, and my youngest didn’t enjoy it, but she didn’t cry either. Second, there is some mild name-calling, but aside from someone being called a “cabbage” I doubt it’s anything you’ve not heard said before on the playground, and it’s all G-rated.  Third, Violet is part of a single-parent family, and if you have recently made that transition, it might be good to know that up front.  The topic isn’t really explored, it just is, but I realize that transition can be difficult on children. Oh, there are these seats. Now, we went on a closed dress-rehersal night, so there weren’t many people there.  However, just as a warning, the backs on the seats flip down!! I’m sure I don’t have to tell you guys how fun they are to mess with! And kick over! And clap with!! Hooray!!

Just sayin.  The chairs and I are not friends.

My kids universally said their favorite part was the dance to the “Party Rock” theme.  Their second favorite was a brief appearance by Zeus who is “too busy listening to his iPod, texting a friend and eating a breakfast burrito” to help Violet.  (Interestingly, it’s the same actor who does both)  The youngest liked Athena because she was pretty, the middle one “got” that Violet wanted to be important and famous, and the oldest “got” the message that she already was.  They also all understood that Violet had been mean to her friend and should have acted nicer.  We had a talk about that in the car on the way home, and about how she apologized for being wrong.

This is a fun play, and a great location to introduce your kids to the arts.  No need to schlep all the way into DC 🙂

Additionally, keep your eyes out for other great performances from this group, who’s got other plays such as Sinbad: The Untold Story, Rapunzel, Home (American Premiere) and Winnie the Pooh lined up for the rest of the year!!

Thanks to the Workhouse and Studio 3 for having us!! We really enjoyed ourselves!