There are just days sometimes where you’re clearly trying to up your mother of the year application.  Saturday was most definitely one of those days.  We were late all day, and I ended up with unfed, unnapped children heading out late to a concert.

Now that I’ve told you about my life fail, let me tell you about the actual concert! Manassas Symphony’s Musical Kaleidoscope is one of several programs that the Hylton Performing Arts Center included in their Family-Friendly Events.  They also hold a “Family Series” that is specifically designed for children.

First of all, the Hylton Performing Arts Center is gorgeous.  It’s a stunning design and looks nothing like some other performing arts venues that look like 1970s office buildings.  I’m not naming any names.  Just commenting 🙂

My daughter particularly liked the ceiling above the orchestra section, and spent most of her time staring up at it through the kaleidoscopes provided to each child who attended. 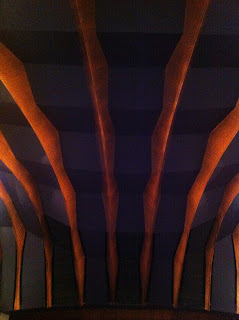 Neat ceiling.  Check.
With the concert starting at 7:30, it was a later evening for our kids, but they did enjoy it.  Our middle guy made it through the first two songs, looked at me sweetly and said “Mommy, this music is so beautiful”, and then did this: 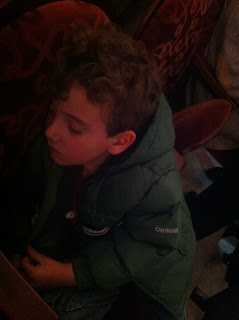 He’s learning via auditory osmosis.  No worries.
The very sweet older couple that sat next to us didn’t seem to mind his light snoring, nor did they give us even one dirty look as we realized we neglected to take the kids to the bathroom first before sitting down.
HINT: ALWAYS GO POTTY FIRST.  Yes, I’ve been a parent for 8 years.  Yes, I should know this.  Sometimes we all forget, people. Also, order your tickets early and get aisle seats so that you’re not bothering the sweet older couple sitting next to you!
In the car on the ride home, middle kid did request that we start playing classical music in his room every night, so apparently it made an impact, even if he was sleeping.
Princess, on the other hand stayed awake the whole time.  She was a huge fan of the strings and a huge hater of the percussion section (sorry, guys, the gong scared her!).  She thought Gershwin’s “An American in Paris” was hilarious and laughed every time they honked the horns (guess percussion isn’t all bad), and enjoyed dancing to the “Russian Christmas Music” at the end of the concert. 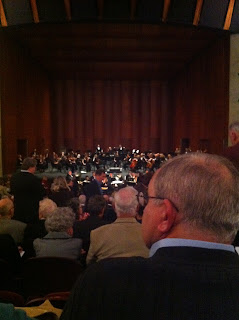 Dear Kodak: My readers would love it if you sent me an actual camera so these junky phone pictures stop.
The 8 year old has been learning about the parts of the orchestra in our fine arts portion of homeschool.  (So has the 5 year old, but he was, as previously mentioned, otherwise disposed).  This concert was actually perfect for him because not only did he get to excitedly point out the different parts of the orchestra, there was a section designed to give a “sound kaleidoscope” where they broke out various sections into smaller parts.  His favorite part of the concert was the first song, and he thought that the Gershwin sounded like Tom and Jerry (bonus points for him since Gershwin is featured in the cartoons from time to time!).
While this concert went a little late, and my kids would have done even better if I’d actually fed them, we all enjoyed the experience, and the kids had fun showing off their knowledge of the instruments.  We’re following up today by replaying several of the songs off youtube and talking about what instruments we can hear and what the music makes us think.
I’d recommend future performances for Elementary aged children, assuming they have a 7:30 start, just because they will have an easier time sitting still, and the performance does go rather late.  That said, if your child can sit through church/synagogue service, and enjoys music, they will do just fine.  Make sure you feed them, and I’d encourage a nap.
Also, as mentioned before, go potty first.
This performance had an intermission and light refreshments were on sale in the lobby.  We really enjoyed ourselves and I love having a symphony nearby! It’s such a great cultural experience for children, and it’s exciting for young “aspiring” musicians to get a little added incentive to practice, too 🙂 Thanks to the Manassas Symphony for thinking about making their concerts a little more family friendly!! We look forward to another concert in the future, this time with a nap and dinner first!
_____________________________________________________________________________
Disclosure: The Manassas Symphony Orchestra provided several adult tickets to PwcMoms readers.  PwcMoms paid for their tickets, however, and was not solicited or compensated for this review.  All opinions expressed are those of PwcMoms.com.