We were able to attend the 2012 Brick Fair at the Dulles Expo Center thanks to some comp tickets from Washington Family Magazine.  (The same fine folks that sponsored our giveaway to the same event).  I know a lot of you were wondering about the event, so here’s my breakdown.

When we arrived, we were seriously nervous about The Line.  The Line looked like it was going to take us the better part of half an hour to get to the actual door to the Expo Center.  We were pleasantly surprised, however, to find that the line moved quickly and we were in the door in about nine minutes.  Once we were inside, we were definitely in awe of the fantastic Lego creations.  Children as young as nine can present their pieces at Brick Fair, with the chance to win awards.  There are also custom Lego vendors, our friends from Hallabolou were there, and there was a wicked game of Lego bingo going on when we arrived.  The ticket encouraged you to allow at least three hours to make it through, and maybe we’re big losers, but we did it in 50 minutes.  Here’s why.

We went with our kids who are 8, 6, and 4.  The little ones were definitely wowed by several of the displays, especially the ones that moved like the ball movers, robots, and giant roller coaster. 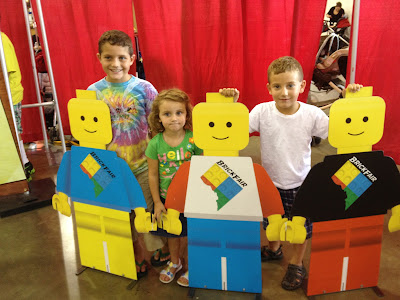 They were even still happy at the end of our time at the Brick Fair, but nobody complained that we were leaving, either.  They did ask if we could stop at the ice cream store on the way home. 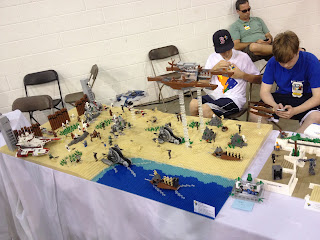 The kids presenting were absolutely amazing and created some awesome scenes! I was completely impressed by how some of the youngest exhibitors produced such amazing results! Each category, and there were several, had gorgeous entries. 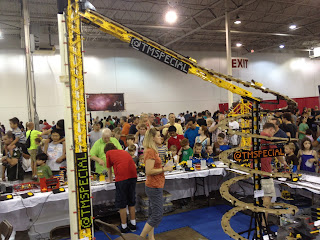 We especially liked the things that moved, whether they were robots, roller coasters, ball movers, or magnetized displays. 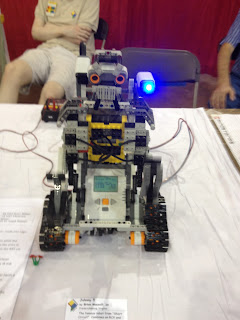 He blinded me with science. 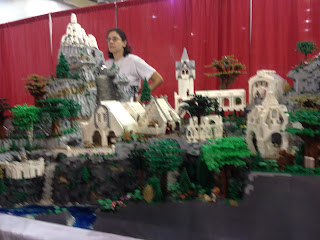 THIS IS ALL MADE OF LEGOS!!! This is what I could accomplish if I didn’t blog and had some kind of measurable artistic skill! 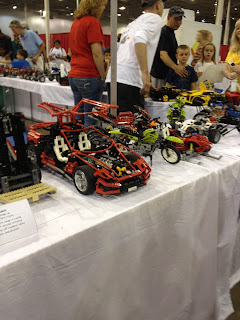 The cars were also a big hit with my kids.

So, if everything was so impressive, why didn’t we take longer? The little ones enjoyed looking but were, honestly, overwhelmed by all there was to see.  You can’t really touch anything, and Legos are toys to most children, so it’s kind of like walking through a giant bakery with no glass over the treats.  You find yourself reminding little fingers not to touch fairly often.  Our oldest probably would have wandered around a little longer and looked at different items, but there’s not really room to wander.  It’s a lot more like being herded through like cattle: 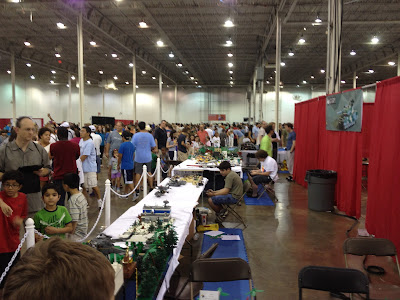 Oh, hello hundreds of our closest friends!! Our children’s biggest complaint was that there wasn’t a ton of hands-on.  There is a small game section near the exit, but they really wanted to go and see cool things and then sit down somewhere and build with Legos.  Instead, we stood in a slow moving line that wrapped around the building and just looked.  Don’t get me wrong, everything was amazing, but it was crowded and slow and not as interactive as we usually like to be.  It’s kind of like a Lego museum, and you know my favorite museums are free 🙂

Tickets are $10 a pop, so while we enjoyed it this time, we all agreed that we probably wouldn’t go back if we had to pay $50.  The kids liked it, but not enough to justify the cost.

Agree? Disagree? I’d love to hear your thoughts in the comments!