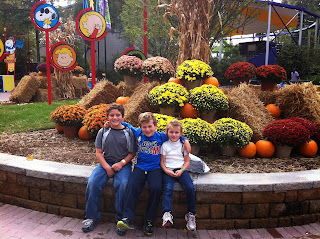 We were so excited to visit Kings Dominion in Doswell this past weekend.  It’s roughly an hour’s drive, which I consider to be more than do-able for a day of fun!   Kings Dominion is obviously open all summer as a great way to spend some of your vacation days, but they are also open fall weekends with a Halloween theme.  Planet Spooky activities and Trick-or-Treat with the Dinosaurs in Dinosaurs Alive! are open Saturdays and Sundays Sept. 28 – Oct. 27 from 12pm – 5pm.

On Saturdays, the park actually opens at 10:30, and we arrived around that time.  While we waited for Planet Snoopy to open, we took our kids to some of the larger sections and enjoyed absolutely no lines.  Once the park got a little more crowded, there were still barely any wait times.  I think the longest line we were in was 20 minutes.  Most rides the kids got right on or waited one cycle for their turn. It was incredibly quick. 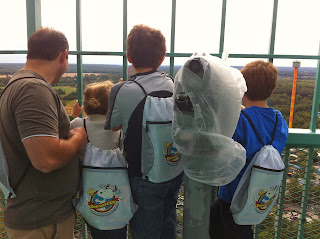 Top of the Eiffel Tower

We spent much of the day in the newly reopened, larger children’s section called “Planet Snoopy“, or, as it’s known for fall “Planet Spooky”.  With 18 rides designed with kids in mind, as well as a host of family-friendly rides throughout the park, most of your kiddos will be able to have a great day on the rides.  What I discovered when we went, though, is that they’ve got numerous family-friendly accommodations, including a “Snoopy Family Care Center” and even a “parent switcher” option you can find out more about in guest services so that families with one child who can ride and one who can’t, such as an elementary schooler and an infant, don’t have to have one parent miss out on all the fun! 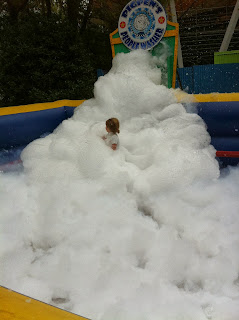 Inside the “People Washer”

You should know that the park also features a “Halloween Haunt” which is for ages 13 and up.  If you stay at the park past 7pm, you will likely have a zombie pop out at you.  If you’re cool with that, then enjoy but since I am a giant fraidy cat, we left by 6:30.  There are some decorations that remain out during the daytime at the front entrance and in some of the other sections of the park.  They are fairly tame, and similar to things that you would see out at your local craft or Halloween store during this season, but I know that some children are very sensitive to that. 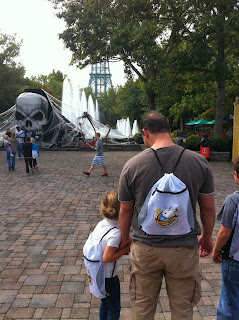 She’s actually commenting that she wants to climb that…she’s not scared of anything.  Ever.

Once you’re inside the park and into the Planet Snoopy section, you won’t see anything but pumpkins and scarecrows- or Lucy dressed up as a witch…but she’s pretty cute 🙂 Snoopy is on hand, of course, too! 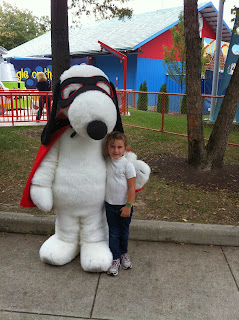 Several of the attractions in Planet Snoopy are designated as trick or treat stops, and when the children complete an activity, they’re given a non-candy treat.  In addition to the regular rides, there were attractions such as a petting zoo, “people washer”, pumpkin decorating, and hay maze.  Peanuts characters also come out both to meet with kids for photo ops, and to perform at regularly scheduled intervals. 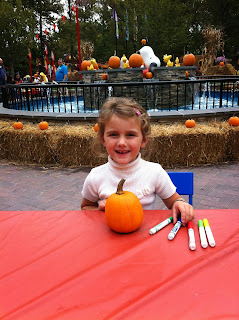 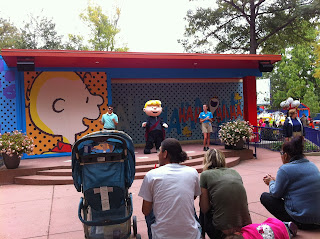 Linus and the Gang host a Sing-a-Long

Also open, for a small additional fee, is Trick or Treat at Dinosaurs Alive! which features a six acre animatronic tour of 36 life-sized dinosaurs from various eras. There’s also a sand pit where children can dig for fossils (our day there was a “paleontologist” in costume).  During Trick or Treat, there are several stations with candy that visitors can stop at, and non-candy treats are available, as well as an allergy list.  I believe we stopped at eight stations along the route.  The dinosaurs make noise, and move, and some are even Redskins fans. 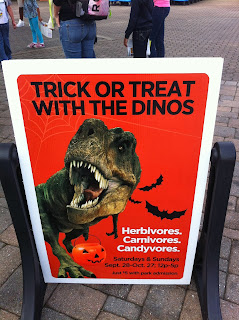 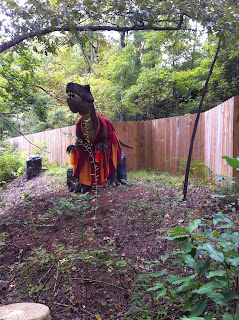 We had a great time enjoying a fall day at Kings Dominion’s Planet Spooky.  It’s especially nice for our family now, because the rest of the park is open, affording my 5 year old the chance to enjoy all the great Planet Snoopy rides, and my almost 10 year old the option of some awesome roller coasters.  Everyone was able to ride something they loved, and the weather is so pleasant right now that it was an awesome day outside.

To purchase tickets, visit the Kings Dominion Website or purchase at the gate.
_________________________________________________
Disclosure: Our PwcMoms team (aka, “my family”) was provided with free admission in order to do a park review.  We were also provided admission to Trick or Treat at Dinosaurs alive.  People who have had extensive brain and neck surgery shouldn’t really ride much, but that was okay with me, because my kiddos had a blast! All opinions are my own, including those about Zombies being scary and me being a pansy when it comes to grown-up Halloween.