Since my 8 year old, Riley, crushed his thumb and can’t write his afternoon journal, he’s opting to offer “something for mommy’s website” that I’m taking dictation for.  Daddy took them to see Big Miracle while I had a girls night last week, so that’s the topic of choice.  Hope you enjoy 🙂 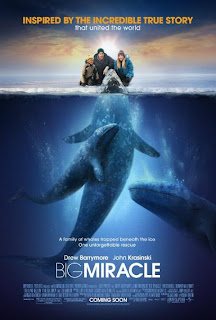 Big Miracle is about 3 whales who are trapped in Alaska in the ice.  They started to leave to migrate late, so they get trapped in the ice.  A bunch of people are trying to keep the ice open.  It all starts with a camera man who went to Alaska to tell People in America Who Aren’t In Alaska about a Mexican Restaurant in Alaska (from PwcMom- we haven’t covered redundancy yet).  Then, the camera man has a little friend who is a kid.  The kid likes the camera man.  So, the camera man said he’d do a video of the kid’s big brother doing some cool tricks and in the background, there are the whales.  The whales are Fred, Wilma and Bam-Bam.  Their names are from the Flintstones.

So, then the movie is all about people trying to save the whales.  Their only hope is an icebreaker that’s on the other side of Alaska, and they want to use a helicopter to get it to the right side.  The ice breaker works by using air to exert force on the ice to break it up.  (From PwcMom- yes, my kids actually say things like “exert force”)

There is a scary part when Russia comes and they try to break a big piece of ice.  It’s really loud.  Also, the baby whale dies and that’s really sad.  There are a couple of bad words, but they’re words I knew from school. (From PwcMom- ha!)  I still really loved this movie.  I think people would like this movie.  A lot of people really care about the environment, so they would like this movie, also people who helped clean up animals that were hurt in the oil spill, they would probably like this movie also, because they like to save animals.  I think that’s it.

(The 5 year old would like to add: It’s a little scary when the ice breaker is pushing the block of ice, and it scared the whales so they went backwards and they couldn’t get a breath.  Whales are mammals so they can’t not get a breath.  That’s scary.  I didn’t like it that the baby whale died, but sometimes that happens, you know?  Also, you shouldn’t try to run on the ice or get on whales like in the movie, because that’s dangerous.  Only moms or dads should probably climb on whales) 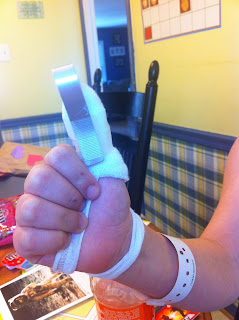 Big Miracle is rated PG, however according to my favorite family friendly movie review site- Plugged In– this fantastic and uplifting story has more than its fair share of curse words, so go with caution (or go with confidence knowing your kid “already knows them from school”)

PS- Would your child like to write a review for PwcMoms? I’m more than happy to publish aspiring authors anytime.