I Finished a Half Marathon, And Only Died A Little

I finished a half marathon. 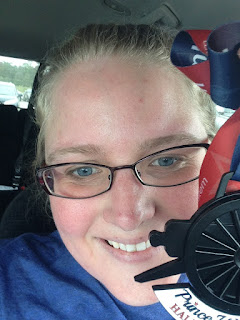 (Yes, that is me in my car. I didn’t even stay for free Moe’s or Duck Donuts, because my shower was at HOME and that was all I really wanted.  That and a blue Gatorade.)

How did this come to pass, you may ask?

Well, I decided in January that I wanted to work on being healthy.  You may remember this from my post (and if you don’t, you can read it here).  So, what had happened was I went along with my happy happy goal of “doing some 5ks” because:

“…you rock just the way you are, the goal for me this year is not to think
my self-worth is defined by my scale, and we’re gonna do some 5ks. Come
if you want, I’d love to see you there.” 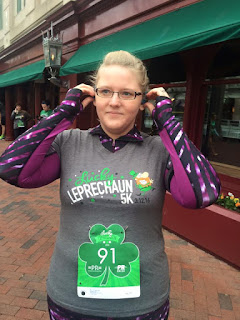 (This is me putting in earbuds at a 5K in March)
And then one night, roughly 12 weeks ago, I was up at 2am (as I frequently am because I own a business, work for a delegate and homeschool my kids, so I never sleep) and I saw that some of my friends had signed up for the Prince William Half.
“Self,” I said to myself, “I wonder how long it takes to train for one of those half marathons?”
So, self and I looked it up on Google and it turns out that you can train for a half marathon in 12 weeks! And then, when I looked at the date, I realized that if I started running the next day (it was a Monday night, and Mondays are rest days) that I could be ready to run this sucker!
So I did what any crazy lady under the influence of caffeine and insomnia rational person would do, and I surrendered $80 of my hard earned blogger money to the PWHalf Marathon people, and decided that this was a good idea.
And then I ran. 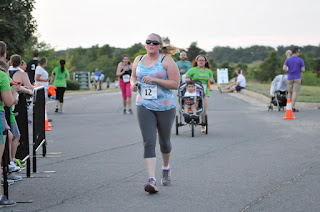 A Lot.
Not quite as much as Forrest Gump or anything, or even as much as my inspirational friend Stacey who runs full marathons LIKE A FREAKING BOSS, but for me, I ran a lot.
I ran on Saturdays with the Running Store at Manassas Battlefield.
I ran on Sundays with my friends.
I ran on weekdays at the Freedom Center when it was too dark outside to run alone.
I ran early mornings with my Moms Run This Town Manassas/Gainesville buddies (I made new running friends!) 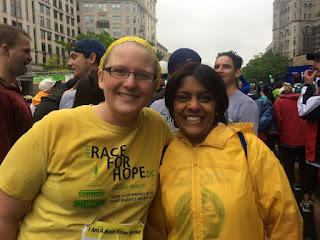 I even ran in the ran with my oncologist.  How’s that for random? 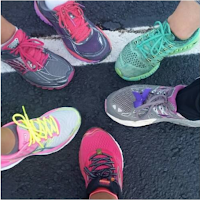 Incidentally, I also started taking a lot of pictures featuring my shoes.  (This appears to be a thing that women do to commemorate that we just finished a run.  I don’t mind at all, I paid good money for these shoes.) 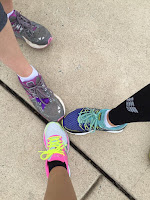 Week before last, I ran to my momma’s house, which is 12 miles.  It was up route 234 and it was the dumbest decision I’ve ever made because that sucker is hilly. (Except that in retrospect, I should’ve done more hills- the Prince William Half is definitely hilly.)
And then on Saturday I was SICK.  Curled up in a ball felt like I was going to throw up s-i-c-k.  But I paid $80 had finished by training and I was not about to lose out on my money going to quit on myself, so I forced myself to eat some dinner and went to sleep.  Sleep did not go well (It turns out this was all NERVES!! Why in the heck would I be nervous?? I knew I wasn’t going to win this thing!) Anyway, I realized around mile 8 that not eating was a horrible idea the day before.  If you ever decide to do something like this, please eat the day before your run so you don’t turn into a living Snickers commercial. 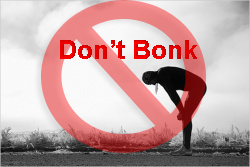 But I showed up on Sunday morning (at 6:15am, bless it.) and finished the race.  And that was the goal.  I finished, I wasn’t last (and even if I had been, I would not care because I still beat all the people who were still asleep….so there).  I had fun with my running friends: 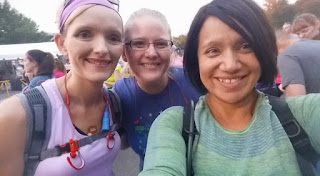 On the left is Claire.  Claire literally saved my life by pointing out “Um, you’re running 11:30 miles right now” when I took off out of the gate following a pacer who was going a little too fast.  Thank you Claire!! My 12:30 pace and I both appreciate you saving us from dying in mile 3!! On the right is Rachel who is always encouraging and somehow magically makes me run faster than I want to.  Yay for running buddies!! These two got me through the first half of the half (as well as many training runs)
And….a point.  I feel like this post should have a conclusion of some kind.  Something meaningful like “You Can Do It!!” or “You’re only as strong as you let yourself be!!”
But honestly, you guys? The only thing I feel like is this: Just do whatever it is for you.  Is it running? Are you worried about the fast people? You know what? I’ve met them, they come in two varieties.
One variety of fast people are jerks and know they’re better than you.  We don’t like them anyway.
The other variety of fast people? They’re in my running group, and they would love to cheer you on while you walk/crawl/barrel roll through your first race.  They’re so proud of you for trying.  And no matter what you’re doing, there’s someone proud of you for giving it a go.
Everybody starts somewhere.  Maybe I’ll get better, and maybe I won’t.  But I started, and I finished.  And you can, too.  Pick a thing and get working.
And if you need somebody to cheer you on in whatever it is, let me know.  I’m excellent at yelling loud, encouraging things- just ask Claire and Rachel about me yelling supportive things at random strangers as I got more and more tired.