How to Train Your Dragon Live Spectacular 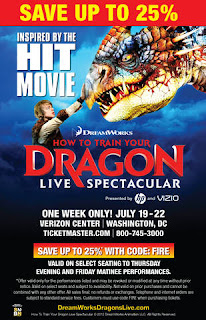 HOW TO TRAIN YOUR DRAGON LIVE SPECTACULAR, inspired by the phenomenally successful, Academy Award® nominated DreamWorks Animation film, fully immerses audiences into the show in ways that have not been attempted before. Barely contained within the arena, the production utilizes the full venue, maximizing every dimension of performance space to transport audiences into a mythical world of fire-breathing dragons who soar overhead at great speeds. The state-of-the-art animatronic technology and large-scale cinematic projections interact seamlessly with the live actors to bring the story to life.

The show features 23 dragons, some with wingspans of up to 46 feet, Viking warriors and world-class circus artists and acrobats, to perform against a state-of-the-art, wall-to-floor immersive projection measuring more than 20,000 square feet. Produced by DreamWorks Animation, RZO Dragon Productions and Global Creatures, the masterminds behind Walking with Dinosaurs, presented by S2BN Entertainment. Click here to watch video and learn more: www.DreamWorksDragonsLive.com<http://www.DreamWorksDragonsLive.com

8 performances only! July 19-22
Verizon Center
Feel the heat and experience the adventure of high-flying,
fire-breathing dragons. Unleash your inner Viking and prepare for the invasion
of HOW TO TRAIN YOUR DRAGON LIVE SPECTACULAR!
Astonishing animatronic technology and world class
performers bring to life the heartwarming story of DreamWorks Animation’s
Academy Award® nominated film. This ground breaking arena show breaks all the
rules of traditional live entertainment for the whole family featuring 23
dragons, some with wingspans up to 46 feet. Don’t miss it!
To learn more about the show and to purchase tickets click
here: http://dreamworksdragonslive.com/tickets.php