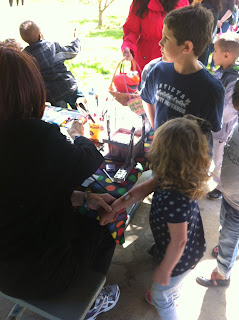 It’s so awesome that places do free egg hunts….but…

While there were tons of eggs, children were not sub-divided enough, and the hunts for the two age groups started at the exact same time, so if you have children in the youngest age group and children in the older age group, you’ll have to choose which ones you want to supervise, or make your younger child participate with all the older kids (which is what I opted to do). If there were more subdivisions than “toddler” and “everyone else” it wasn’t clearly marked so I wasn’t aware of them.  The hunt started two minutes early (according to my iphone) and was over in 30 seconds.  The biggest problem, though, is parents and older siblings running around preventing the kids from having fun by either taking eggs or blocking children from getting them so that their child can. 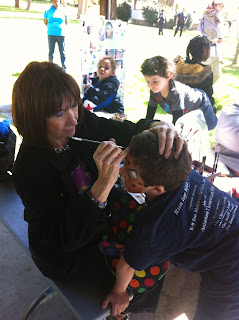 Apparently there were some larger toys (balls, etc) that were handed out, but they ran out very quickly and most of the children around us didn’t get one, which was no big deal, but several children were devastated.  The Easter Bunny was on hand for pictures, and Face Odyssey was there doing face painting.  We opted to get in the face painting line, and I have to say that the Face Odyssey woman did an absolutely fantastic job.  The line was a little crazy because, again, of the parents.  We had one person standing in front of us who we assumed was holding a place for his kids.  I have no problem with that, I’d rather have the kids playing nearby than crying in line- but he was actually “holding a place” for two families with a total of 6 kids, so when we thought we were next, we actually had 6 kids leap in front of us.  Not awesome.

By the time we got to the front of the line, the event had actually ended and there were still people waiting behind us.  The Easter Bunny was gone, and the lady from Face Odyssey had decided to stay late to try to get everyone who’d waited so long through.  I’m not sure if they paid her extra for her time or if she just stayed, but it was very kind of her either way.  My guess is that the weather was so unseasonably warm that way more people showed up than the planners were anticipating, but separating the age groups and having additional event staff to facilitate face painting and bunny pictures happening would have helped.  I didn’t actually get pictures of the egg hunt since it happened the minute we arrived and was over so fast, but it looked like your standard egg hunt- so you can imagine 🙂 The eggs aren’t really “hidden” per se, they’re more tossed all over the lawn, so it’s less a hunt and more a “gather”.

Breakdown:
Dumfries Egg Hunt
Pros: Free, beautiful location, great face painting
Cons: All kids hunt at once, not enough supplies/special activity personnel for number of children attending.
Warnings: Parents can get out of control at these egg hunts.  Merchant’s Park is gorgeous, but it doesn’t have a PA system, so announcements made from the Gazebo can be a little hard to hear if you’re on the outskirts of the area.