Since you guys seem to enjoy craft and food ideas, I’ve been trying to share more of them since I really like to Martha Stewart it up as much as possible.

I especially like it when it’s REALLY easy.  The Frankenstein Pops I shared on Facebook? They’re so easy a four year old can do it. 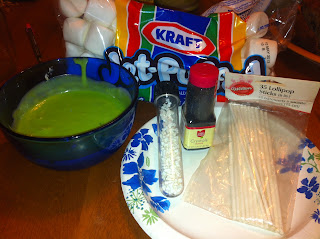 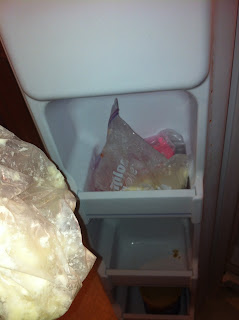 Step One: Get a bag of frosting out of your freezer.  Here we have cream cheese frosting, vanilla buttercream, and hot pink lemonade buttercream.  What’s that? You don’t make a double batch of frosting every time and freeze the leftovers for emergency cake-frosting? You don’t MAKE your own frosting? Sigh.  Yes, go ask Betty Crocker for a can of white frosting…that’ll work, too. 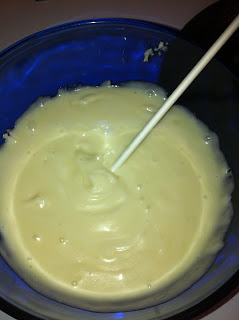 Step Two: Plop your frosting into a bowl and microwave for about 30 seconds if it’s room temperature, or about a minute if it was a popsicle when you put it in there.  You’re looking for fondue-consistency frosting. 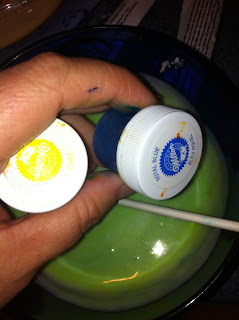 Step Three: Curse yourself for not getting green food dye at the Walmart when you were JUST THERE.  Remember that yellow an blue make green.  Mix well. (These are Wilton gel dyes, which I love because they don’t water down whatever you’re tinting.  However, for this, you could use the liquid dye you get at the grocery store, too.  Wilton gels are sold at craft stores like JoAnn Fabrics and Michaels and Walmart stores) 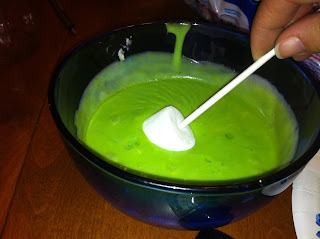 Step Four: Pop a marshmallow onto a lollipop stick and dunk it in your frosting.  Tap gently on the side of the bowl to remove any excess and then set the stick into a heavy glass cup set over a plate to let the frosting set just slightly (a minute or two, tops). 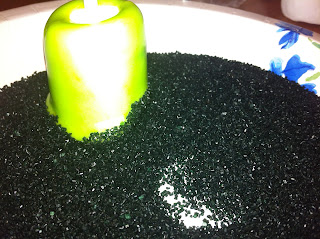 Step Five: After your frosting has had a minute to settle and drip off and excess, give your marshmallow a roll in the black sugar or chocolate jimmies to add hair. 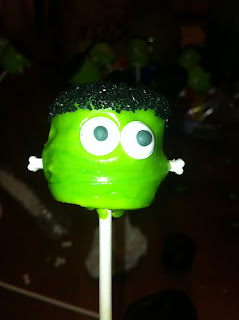 Step Six: Add eyes (you could pipe these on, but this whole treat was inspired by the sugar candy eyeballs being on sale for $2) and imbed a sugar bone on either side of your Frankenstein’s head.  You could also pipe on a mouth, but if I was creating a monster, it would do my bidding without talking back.  I’m just saying. 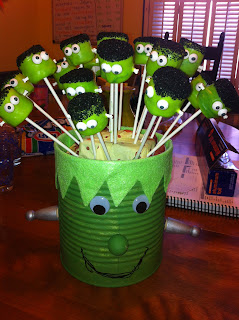 Optional Bonus Points For Step Seven: Pop some floral foam covered in a seasonal napkin inside your Frankenstein Can and go on a shock and awe campaign at your preschool party.  Winning.

You could also do these heads with cake pops, you’d just want to form them into squares instead of balls.  Witches would be cute, too, with purple frosting, a mini green m&m nose, and just the cookie part of an Oreo with a Hershey’s Kiss glued on top with some melted chocolate.