This is a re-post of last year’s review of the Virginia Renaissance Faire.  However, we have tickets again this year!! Want to go? Leave a comment below with either your favorite part about the Renaissance Faire, or if you’ve never been, why you’d like to go! We’ll pick a winner on Friday!

Thanks again to guest blogger Gaby from Domestic Goddess Musings for sharing the Virginia Renaissance Faire, and to the Faire coordinators for sponsoring our ticket giveaway!!

Many thanks to the fabulous Kristina of PWC Moms for sending our family to the Virginia Renaissance Faire! It was a lovely day in the Lake Anna region of Virginia, so we ended up staying from 10:30-2:00 (the event runs from 10:00-5:00 each day). Each weekend the faire is open has a theme, and this weekend featured Celtic Heritage. I’m not sure what exactly was more Celtic yesterday than any other day, but we saw a lot of kilts. 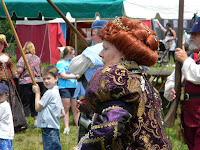 The fair grounds are rather large and could have easily accommodated crowds larger than the ones we visited with. A word to the wise though: take a jogging or all-terrain stroller. The “paths” are gravelly, and the grass is uneven. Pushing our umbrella stroller around was difficult once we were having to push a larger kid while juggling the little one. 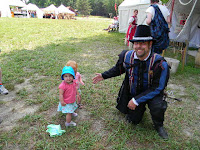 terrified of all the Renaissance actors. It took them about an hour and/or the queen’s arrival to make them enjoy interacting with the characters. My 2 y/o never really loosened up enough to talk with anyone though she did inspect their clothes closely. The actors all remained solidly in character, and by the time we left, I’d begun returning their “Good morrows” and mentally referring to the crowd as gentles instead of people. 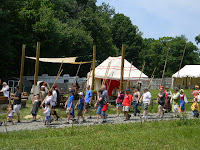 My husband and our friends were then recruited to march in the Queen’s parade. They got some basic training on how to carry their “lances” and how to march. It was pretty cool. While they did that, the kids and I listened to a bard spin tales, watched the cooks create meals in an outdoor stone oven, and enjoyed the minstrels create improvisational songs.

We watched a few skits held in the Queen’s honor, and I was happily impressed that all the topics were pretty clean. No flaming lewdness or cursing. The worst subject was that of pirate drunkenness, and even then, it was poking fun at pirates, not praising them. Other acts we watched included another improv singer, a magician, and the Fool. The Fool was my favorite. He did lots of fantastic acrobatic tricks while juggling. The best one was balancing on a board on top of a rolling barrel while tossing knives around. My kids liked him hula hooping with a flaming hoop best. There was a complimentary wine tasting of the Lake Anna Winery’s samples for adults. Yum! Among the things we missed were an equestrian/jousting show, an archery exhibition, and a knighting (or ordaining as a lady) of the children. 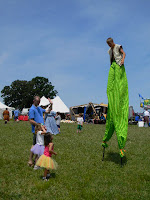 Things we enjoyed seeing but not participating in were the petting zoo (baby alpacas, goats, and sheep), watching a weaving demonstration, watching gentles try to throw axes, watching gentles try archery, and playing in the kids area. There were also tons of vendors. It was very easy to get tempted to want a fun costume item, but so many of the costume pieces for sale were uber-expensive, so the temptation passed quickly. Other vendors had jewelry, chain mail pieces, weaponry, old-fashioned wooden toys, soaps, tobacco, and alpaca wool skeins.

And finally…the food! I’ve only been to one other (smaller) Renaissance Faire, and the food was pretty much the same. I saw frozen chocolate covered cheesecake on a stick (drool), funnel cakes, Scottish eggs, turkey legs, ginormous saus 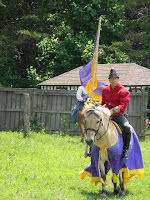 ages on a stick, and sweet potato fries as well as standard American fare of hot dogs, burgers, and Frito pies (num!). We enjoyed a turkey leg and two hot dogs for $13. While it was not nearly enough for a family of five, I had packed a very hefty lunch bag with snacks, juices, and extra waters. My husband and I finished off our 1L bottle, the kids finished their 0.5L bottles, and the baby polished her 8 oz. cup of water pretty quickly, and the weather was in the mid 80s. Drinks, of course, are where you really pay a premium. Bottled 16 oz. waters ranged from $1.00-$1.50, 12 oz. sodas were about $2.50, and lemonades were $5.00 for a largish plastic cup ($2.00 for refills). 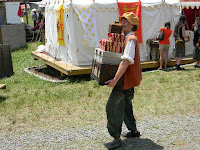 We went to the car to snack, but I don’t think there would have been a problem if we had brought the food in. When we walked back into the Faire, the kids had their apples in hand, and nobody remarked on them. 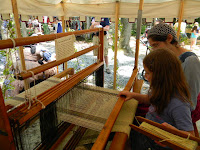 he Renaissance Faire was a great event, and I am so glad our family had the opportunity to attend. Next year, we’ll take advantage of the Military History weekend over Memorial Day and get in gratis.

Pros:
-Great chances for the kids senses to be stimulated (touching the weapons and looms, listening to the music, watching the shows, tasting the food, and smelling the animals) to learn about history.
-Lots of space-we weren’t constantly running over feet with our stroller or losing our kids in the crowd.
-Plenty of shady spots to take a break or change a diaper in.
-The ability to go and come back in (hand stamp return method).
-Plenty of FREE parking spaces!
-FREE wine tasting!

Cons:
-The actors were a little scary to the kids at first.
-Some gentles visiting the Faire felt the need to dress like serving wenches and show more skin than I wanted to see…and I am by no means a big conservative when it comes to dressing.
-If you get there after 11:30, you’re probably going to be hiking to and from your car.

Caution:
-It’s easy to get dehydrated and over-exposed in the sun despite the lovely temperature and slight cloud cover. I was thankful I had a stash of hats in the car and sunscreen in the diaper bag. Bring lots of water and sun protection.
-Bring an all-terrain stroller so you have an easy time of pushing your tots around.
-Be aware that some female costumes will be overly revealing.

Recommendation: A great family outing. Definitely do your best to get out and support this event!