Guest Post: The New American Trail at the National Zoo 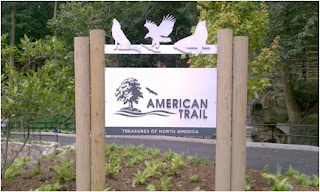 I wouldn’t normally venture out to the Smithsonian National Zoo on
a humid Saturday at the end of summer, but this wasn’t an ordinary
weekend.  After two and a half years of
work, the American Trail was reopening to visitors.  Did you know that this trail has been part of
the National Zoo since the late 1800’s?
And that it was originally called “Beaver Valley” before they changed
the name in 2007?  Or that one of the
main reasons for the renovation was that the seal and sea lion pool was leaking
over 100,000 gallons of water a day despite efforts to conserve the water?  Well, if you didn’t, you just learned your
new thing for the day.
We started at the part of the trail closest to The Elephant Outpost
(which is awesome if you haven’t seen that new addition!) and worked our way
down the hill.  It was late afternoon and
we were finally getting a break from the sun. As we walked along the trail we experienced several of North America’s ecosystems, including coastal
upland, wet forest, eastern woodland forest and the shore. The trail ignites
all of your senses as it is filled with sounds of running water, a variety of green trees
and flora, tall rock walls and smells of the water.
The first animals we saw were the two American river otters.  Their exhibit is not as large as the Asian
river otters’, but it was fun to watch them swim and wrestle underwater.  Next, we saw the North American beavers. The
beavers were pretty active, too!  This
particular exhibit hasn’t changed that much, but you do get a great view of the
beavers. One was having a snack on land while the other was busy carrying
sticks and such to their dam.  My girls
just loved going back and forth watching the beaver work.  Also included in their exhibit are two hooded
merganser ducks, but they were sound asleep on a rock when we were there.
Adjacent to the beavers are two gray wolves (the white one is
beautiful).  This species has never been
exhibited before at the National Zoo.  The
white one was in plain view pacing his area.
The revamped exhibit allows for visitors to see the wolves better when
they are out and about.  Don’t worry
about the Mexican wolves the Zoo had before on exhibit on the trail. They were
part of a conservation release program.
Across from the wolves is a bald eagle.  I don’t think people realize how big this
bird actually is.  I noticed that the
exhibit was not enclosed as I remember it being in the past.  This is because the eagle fell from its nest
when it was young and can not fly.  I
like the openness of the exhibit and you can get a pretty clear view from a
side viewing area.
We did not actually see the raven exhibit, but there are four of
them.  One of them is a rescue. This is
another species the National Zoo has never had on exhibit before.
We didn’t intentionally save the best for last, but it worked out
that way!  Of course, the big talk has
been about the new seal and sea lion exhibit that was being unveiled.  I don’t know how many of you remember the old
exhibit for the seals and sea lions, but it was more like a huge,
white-bottomed swimming pool than a natural habitat for the creatures.  This new exhibit is totally different!  You will seriously forget you are at the zoo
and will be transported to the west coast once you enter this exhibit.
As we got closer, we could hear children screaming and
laughing.  I thought the seals and sea
lions were swimming and that’s why everyone was so excited.  I had totally forgot about the tide pool!  My tired husband suggested we walk on by so
the girls wouldn’t notice.  Granted, we
had been at the zoo for a LONG time by then, but I said we should go for
it.  (I am trying to do more of “living
in the moment” these days.  The “old” me
definitely would’ve agreed with him.)  He
asked if I was sure and I said let’s get these socks and shoes off! 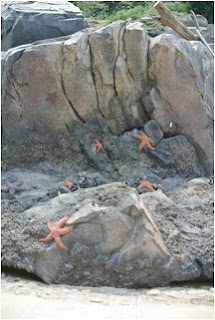 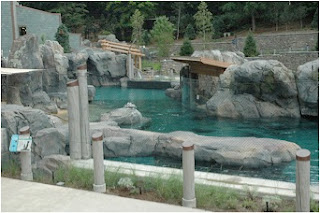 Photos from Smithsonian National Zoo:  Empty tide pool
The tide pool is very kid-friendly and is surrounded with model sea stars, barnacles and sea urchins – which my 3
½ year old loved searching for and touching.
Water shoots up from numerous holes in the ground.  I almost got caught over a couple of them,
which my husband found very funny. (Did I mention I was wearing a skirt?)   Every two minutes, a “tidal wave” sweeps
across the area.  The water came up to my
ankles.  My 3 ½ year old would rush up to
where the water would come out of and my 17 month old was trying to “catch” the
water spewing from the “geysers” around us. My girls love the water, so they had a blast! After we were well soaked, we headed on to the rest of the
exhibit. 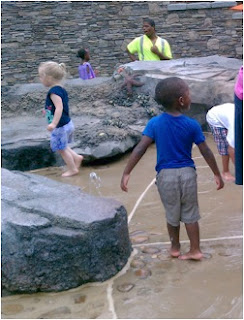 Having fun!
The first seal we
saw was a gray seal.  She is a retired
NAVY seal whose skills were utilized during the Cold War.  (Maybe that’s why she was napping.)  She will have three friends join her in the
late fall. Two harbor seals will also join the exhibit then.  This is another species that the National Zoo
has not previously exhibited.
Next, we got to
see four very active California sea lions (two which are rescues) and two lazy
brown pelicans.  Both pelicans have wing
injuries that prevent them from being released into the wild. 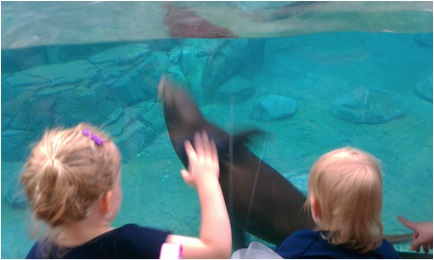 Trying to touch the sea lion–how precious is that?!
The underwater
viewing area was filled with adults and children alike trying to get a glimpse
of the sea lions swimming by.  This is a
great place to just park the stroller and let the sea lions do the
entertaining.  The sea lions seemed to be
showing off by swimming on their backs and looking right at us as they swam
by.  I could’ve sat there longer myself, but
we wanted to give other people a turn. 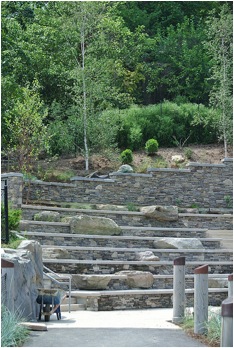 Photos from Smithsonian National Zoo – This is the view from the
seating area pictured below.  I love the
natural look and feel of it.
As we walked
further along the path, we saw this huge seating area where visitors can sit
and watch the keeper talks, which happen twice a day.  It would be a great place for a break or just
for watching the sea lions if they are on the rocks.  However, it’s not very shady. 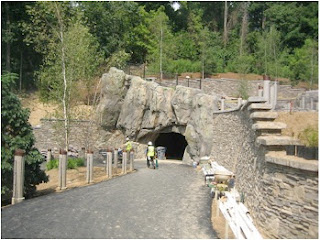 Photo from Smithsonian National Zoo – The hidden gem of the exhibit
We were getting
ready to leave the trail when I noticed another path.  I decided to go ahead to see what it
was.  I saw the sign that said “stroller
parking” but the kiosk was shut down for the night.  So, I peeked in the cave and boy was I taken
back!  The flooring is soft and bouncy and
there is a HUGE underwater viewing area.
There is no ambient lighting behind you and except for not being wet,
you feel like you are under the water.
It really felt like the floor was moving.  We took advantage of the fact that we could
have our strollers in there and parked the girls for a private show.  A few other people meandered through, but
other than that we had the cave to ourselves. There is also a small seating area
where visitors can sit and watch. 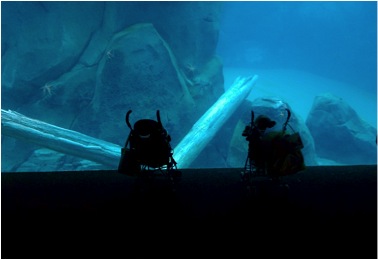 Waiting for the Sea Lions
There is also the Seal Rock Cafe on the trail, but it was closed by the time we made it by there.  The cafe serves local Chesapeake Bay seafood meals and it even has a vegetarian option.  These meals feature local, seasonal, and sustainable ingredients such as shrimp and fish.
The National Zoo did an exceptional job with the American Trail renovation.  There is so much more to it than meets the eye.  I didn’t even mention how so much for the trail was done with “green” thinking in mind.  I have spent quite some time reading about the building of the train, the exhibits, and the animals themselves.  I definitely recommend that you take the family and learn more about what treasures are around us in our own country- from flora to fauna.  The American Trail is certainly an experience for the senses as well as the mind and a great field trip for the entire family! 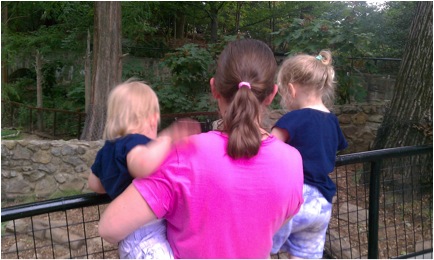 A Few Tips
-Bring water.  I didn’t do this and had to shell out $3/bottle and it wasn’t even cold.  They gave scups of ice, but bottled water was hard to come by that hot, humid day!
-Be prepared to park your stroller to enter the cave
-The closest bathrooms are a three minute walk uphill.  They actually have a sign posted with the time!
– Not all parts are shaded, dress for the weather/sun appropriately.
_____________________________________________________
Angela Pounders is a transplant to Manassas Park from Arlington.  She is blessed to be a stay at home mama to two beautiful girls.  As a former teacher (as well as preschool director and Children and Family Director), she is always on the look out for fun, easy and educational things to do with her girls.  She also loves to share her ideas and is looking to start her own blog, The Master’s Daughter, by the fall.