Giveaway: Peter and the Wolf at the Hylton Performing Arts Center

The children and family performances at the Hylton Performing Arts Center in Manassas, Virginia, are a great way to expose your children to the arts in Prince William County!

Coming up in February, the Hylton Family Series will be presenting Peter and the Wolf on February 2nd with showtimes at 2pm and 4pm.  Children’s tickets are just $5, which is very affordable, with adults at $15 per ticket.  Tickets can be purchased at 1-888-945-2468, or online at HyltonCenter.org 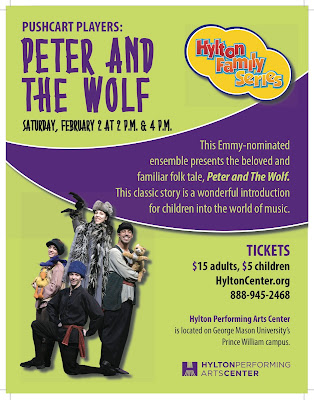 Here’s a synopsis:
The Pushcart Players makes its Hylton Center debut presenting the beloved and familiar folk tale,Peter and The Wolf. Set to music by Prokofiev, this charming Russian story follows a young boy who dares to venture into the woods, despite his grandfather’s warning about a dangerous wolf that lurks within. When Peter’s beloved duck, Clara, is swallowed whole by the wolf the brave boy is determined to capture the fierce creature and save his friend. This classic tale offers a splendid introduction for children into the world of music, with a different instrument and melody representing each character in the story. Don’t miss this Emmy-nominated ensemble hailed by The New York Times as “a polished and knowing theatre company … for children.”