Where can you and your kids visit all your favorite celebrities in one swoop? Madame Tussaud’s, of course! Pose with your favorite historical figures, celebrities, and politicians all day long- they don’t mind at all because they’re wax! 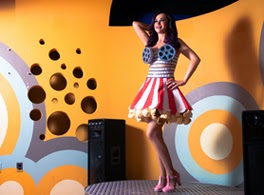 But you can also visit Barack Obama in the Oval Office:

Along with every other US president, for that matter!

Want to go? Enter to win your tickets using the Rafflecopter below!

Want more info? Here’s some details from a review I did a few years ago:

Madame Tussaud’s is very easy to get to.  There’s easy metro access, but we ended up driving (395-14th street-F street) and were there in about 30 minutes, including parking.  There’s a $10 a day parking garage right across the street, but there’s also lots of on-street parking available if you go on a day that isn’t full of Cherry Blossom visitors trying to beat the snow!

When you enter Madame Tussaud’s, there’s a line to pay, then a few steps down to a brief video where they demonstrate how the wax figures are made.  You then head to the left (I’m mentioning this because I was a little unclear on where to go!)  and go through a few halls of presidents.  Several of the exhibits have a way to interact with the figures- for exmaple, George Washington has a “boat” that you can sit in and don a Washington-esque coat for a pictures.  Lincoln (depicted sitting in the balcony at Ford’s theatre) also has a coat you can wear for your picture.  Bring. Your. Camera. If your kids are anything like the kids I took, you will hear “take my picture!! take my picture!!!” around 3,000 times 🙂

After you move through the presidents, there’s a spot at the end where they take commemorative pictures in the “White House” or with the “Obamas”, and then you move into some historical figures.  There’s Rosa Parks and a bus background, Martin Luther King Junior, Malcom X, and also some historical figures in with the presidents like Jackie O, the Apollo astronauts, Winston Churchill, and others.

The final two sections are famous athletes and movie stars/singers.  The little girl that we brought was excited to point out the Jonas Brothers.  I took a picture with my future ex-husband, George Clooney 😉 and my only complaint was probably that there was a Robert Pattinson who wasn’t sparkly, and there was no shirtless Taylor Lautner.  Just saying.

The kids I took (all 7 years old) had a really great time.  They were super excited about people they recognized (Washington, Lincoln, Obama, Tiger Woods, Britney Spears, Jonas Brothers, astronauts) and anything that had an interactive component. They were also happy to have me take their picture with anyone who they thought looked cool.  I think that the ideal age to take here would be 9 or older, just because they would have exposure to more of the historical people and would be more excited to see them, and would be able to read the fun-facts more independently.  That said, I was totally happy with our trip and my 7’s had a great time!! Fair Warning: The end of the tour dumps you into the gift shop, so be prepared to stop any wandering little hands.
____________________________________________________________
Disclosure: This giveaway provided by Madame Tussaud’s DC location.  All opinions are my own. By entering you’re agreeing to all of our Giveaway Rules and regulations. I’m not responsible for traffic, weather, your kids being sad the real Katy Perry isn’t there, or any other drama you encounter.