We are incredibly fortunate (or we planned well) to live close to family that loves to babysit our kids.  I know that for some of our friends, finding a sitter is incredibly difficult.  Either they can’t find one, they’re not comfortable leaving their children, or the added cost to the date is too much to warrant going out. Because of that struggle, I think it’s such a fantastic idea that Jake’s American Grille in DC offers childcare on-site for both their Thursday night date-night and their weekend kids brunch.

It’s not in PWC, but I was willing to take one for the team and check it out. 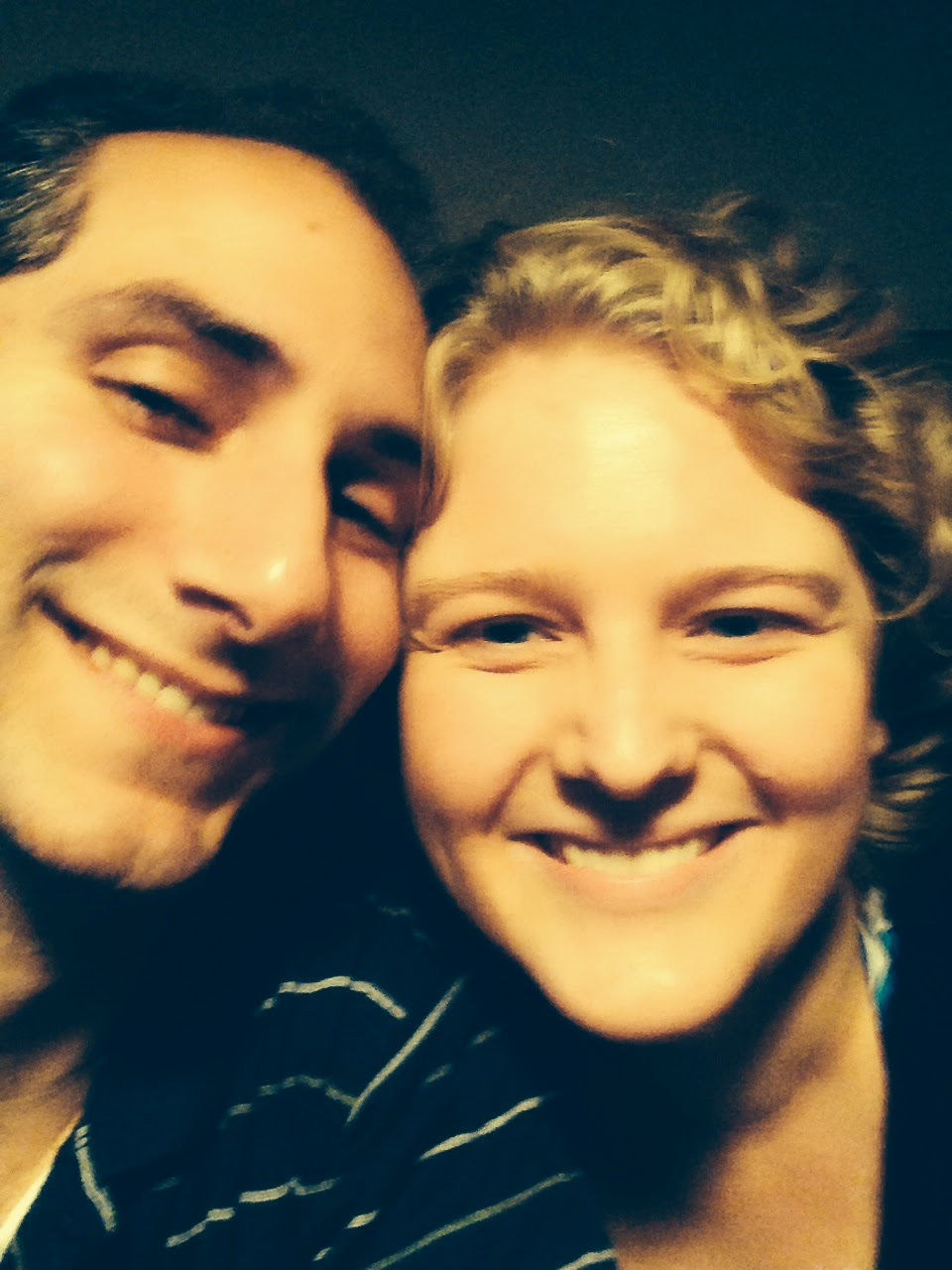 With this guy, because he’s awesome. (For those of you who are new to PwcMoms, that would be my husband, Austin.)

The drive was horrific.  The Thursday night we picked for our reservation was the same night mother nature picked for intermittent torrential downpours.  We also opted to take 66 in rather than back tracking to take HOV on 95.  We just moved, it’s not our fault.  All these things meant it took us 2 hours to get there.  Obviously this is not normal, we just got unlucky, and that can happen in the DMV.  The restaurant was incredibly kind about it- we called to let them know that GoogleMaps said there was no way in heck we were making our reservation, and they moved it out, no problem. 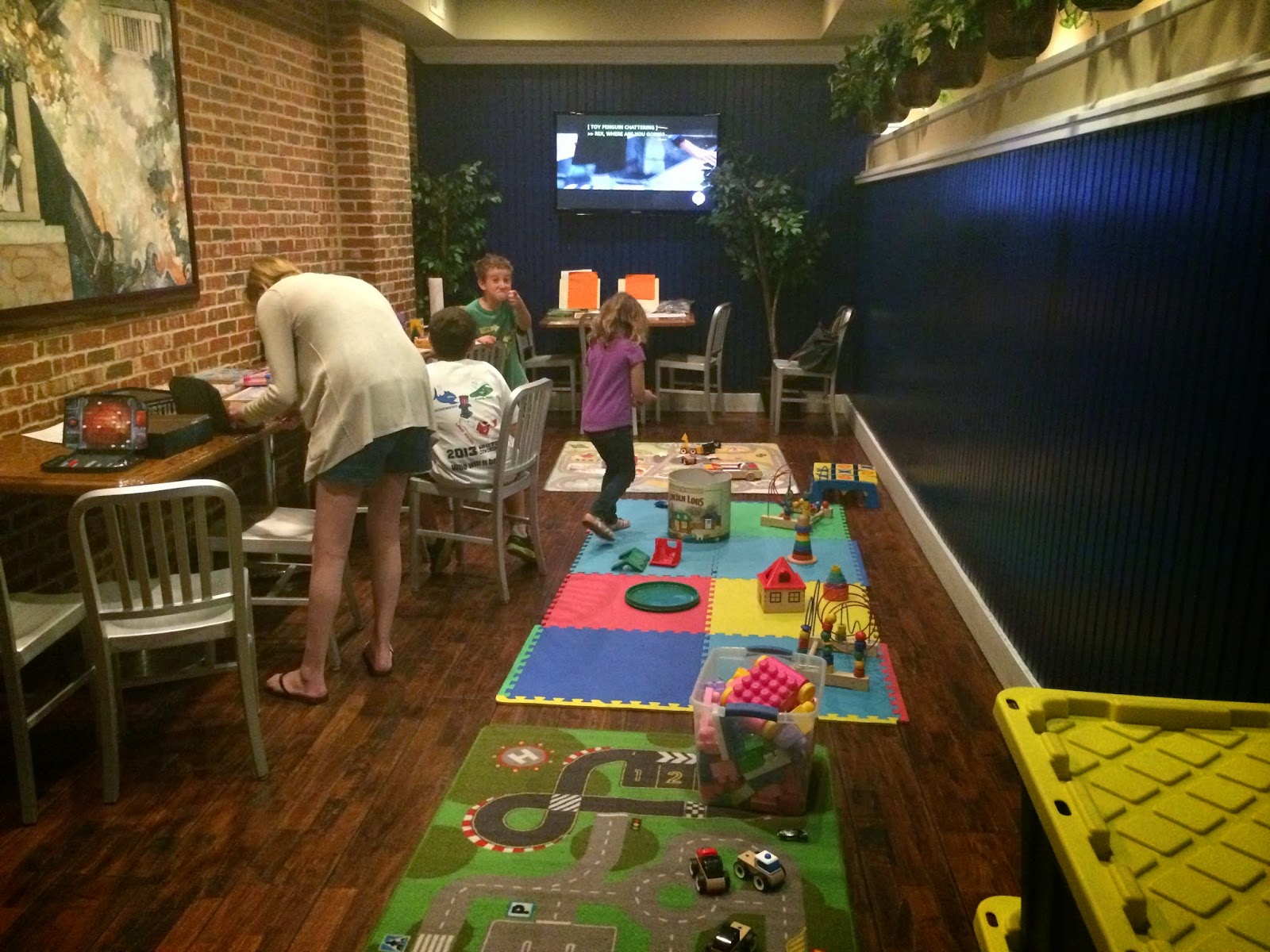 The kids area is just off the bar (which seems strange when I type it, but actually wasn’t at all.  There is a sliding door, but it was kept open for us).  It’s narrow but there’s plenty of room.  Professional nannies or Montessori school teachers staff the room, and the restaurant shared that many regulars love the childcare workers so much they’ve poached them for work other days! 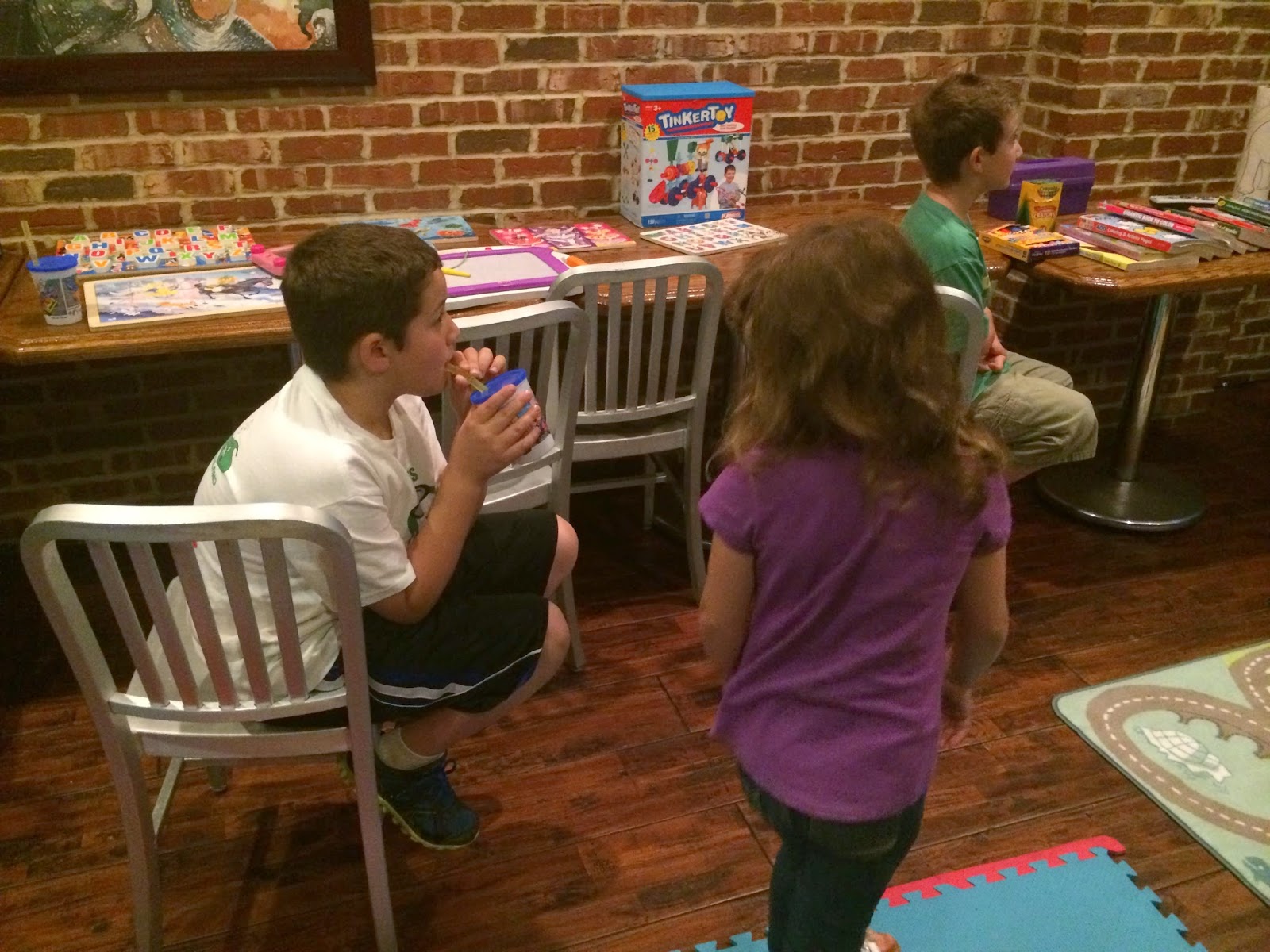 Childcare is available for children who are potty trained up through age 10.  Rates are $15 for the first child, $12 for the second child, and $10 for subsequent children.  We worked it out in our heads that with a 3 hour drive (it was only an hour to get home) and 2 hours for dinner, we’d pay our sitter $50.  Childcare at the restaurant was $37 and each child got a kids meal included in the price.  Works out well, as far as our money is concerned. 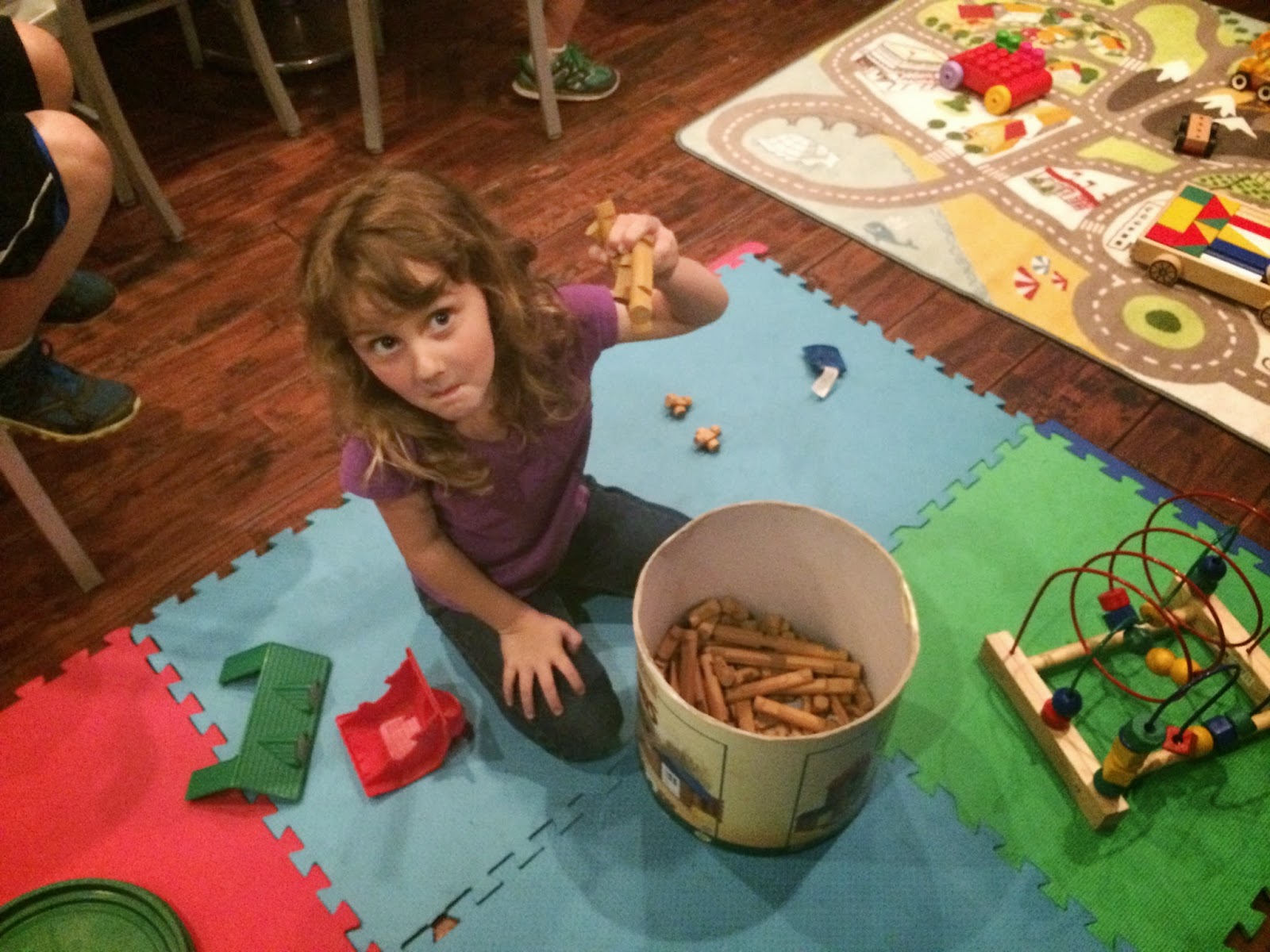 The kids room has lots of toys and games, as well as a TV.  Savannah liked the Lincoln Logs and the boys watched a Superman movie, so everyone was happy.

So the kids were all set.  We were close by, they could get us if they needed, the restaurant was even happy to put a second table next to ours if we wanted to eat as a family and then let the kids go play.   They were happy to play in the kids room, though, so we ate alone.

As far as the food, we opted to order off the $30 prixe fixe menu, which included a starter, main, and dessert.  The a la carte menu was also available.  Portions were good, so we could’ve ordered off that and shared, but we didn’t 🙂 $60 isn’t bad for dinner in DC!

Austin got the wedge salad, no dressing no blue cheese, and I got the broccoli cheddar soup to start, also on the menu were mussels.  The soup was really good, the salad had extra bacon, which is never a problem.  For the main, Austin got the pasta primavera with marinara instead of cream sauce, which was okay. I ordered the quarter spinach stuffed chicken, which they initially forgot to bring (although our starters and Austin’s pasta came all at once)- it was absolutely amazing, but lacked the spinach filling the menu mentioned.  I’d definitely order it again if I went back, even missing the stuffing.

I’m a bad blogger and forgot food pictures until dessert.

Austin got carrot cake and I got ice cream (there were only two choices so we picked different ones).  Neither was particularly good, although they were both big- we could’ve shared one- so we just snagged the kids and made their night happy. 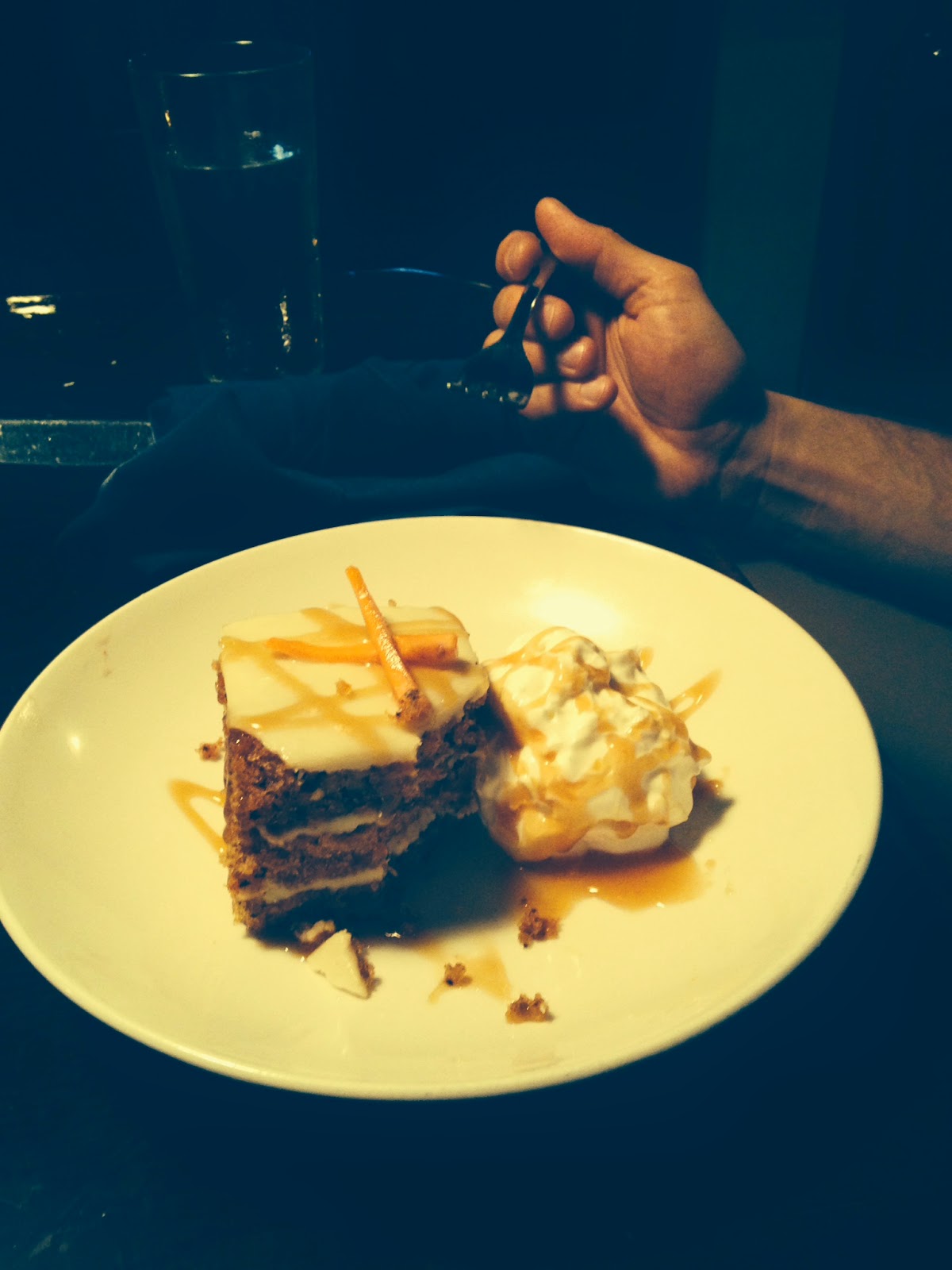 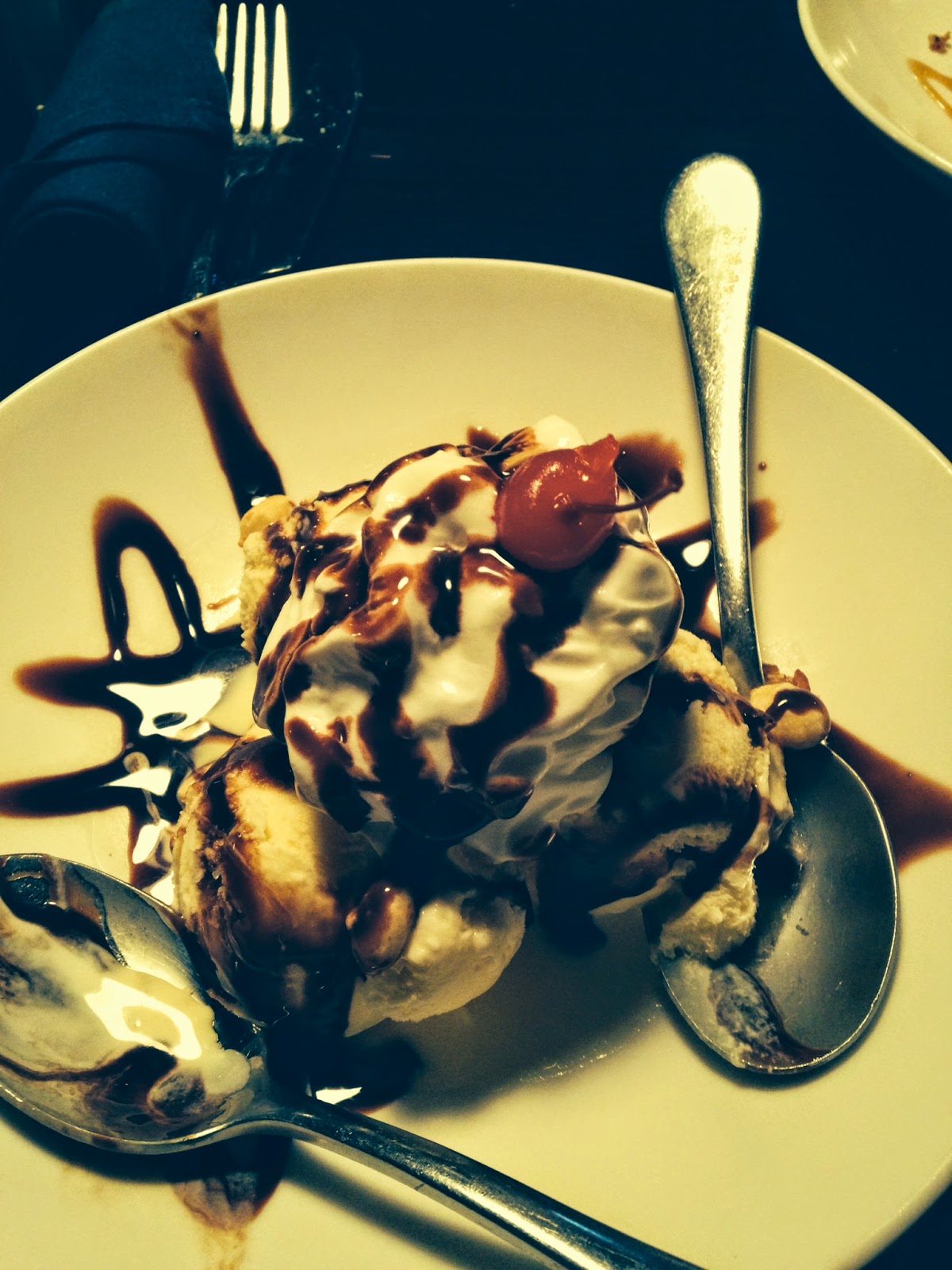 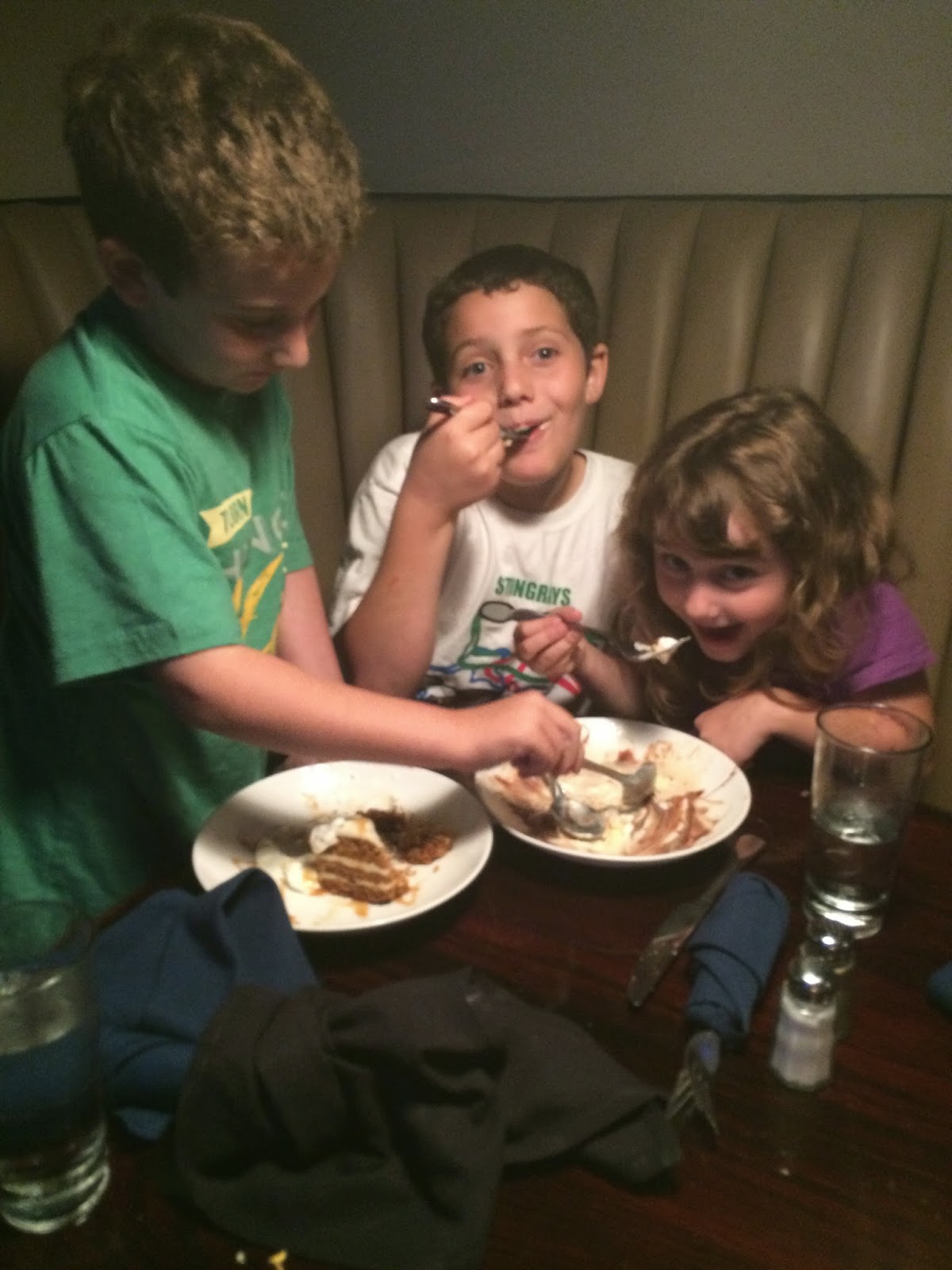 They were more than happy with the ice cream 🙂

So.  All in all, the idea is a really good one.  The kids had a fantastic time, we got a date in with on-site childcare (no phone calls except the reservation), and I got to hang out with my hubby.  If I had it to do again, I’d order off the regular menu- Yelp seems to recommend the burgers.  Also good to know, there is a basement bar called Jake’s Boiler Room, which is really fun, bright, and has lots of games available (both traditional bar games and an entire slew of board games for various ages!) I think that this is definitely a great option for parents who need a night out but don’t have a sitter or aren’t comfortable leaving their kids. The Sunday brunch, though, might be a better deal for you if the price still isn’t right- childcare is free on the weekends.

Want to check out Jake’s for yourself? I’ve got a few options for winners!! Jake’s is generously offering 5 winners ONE of the following prizes:

Enter to win using the Rafflecopter below, and when you go, don’t forget to email me and tell me how it goes!! I’d love to include your feedback, too!!