My new year’s resolution is to do a 5k every month in 2016.  I was so excited to partner with PR Races to do several of their 5k options! You can read more about my 2016 challenge here. Unfortunately, I wasn’t able to run my scheduled February race (I’m going to do a makeup race this weekend) because of a number of factors:
1- The Good: my son’s hockey team decided they were going to win some games!! Their record this season is 1-2-1, so I had no reason to think their tournament (games were only guaranteed Friday and Saturday) would lead to me being busy on Sunday….but then they kicked some butt and finished second in their division!! 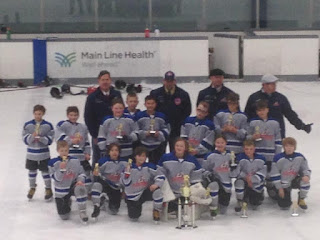 2- The Bad: In addition, as a fairly new runner, I don’t have a lot of equipment.  You wouldn’t think there’s a lot of equipment involved in running, but there certainly is when it’s 10 degrees at race time, and I don’t have it.  I thought about driving down from Philadelphia for the race and then driving back up for the game, but my husband pointed out that I don’t have a balaclava, running gloves, or a coat that isn’t to my knees (because I’m a hockey mom, y’all, I go for coverage), and as such was being dumb.
3- The Ugly: When we got back and I finally went to the doctor, I also had a double ear infection and a sinus infection, which I was fighting all weekend.

Excuses, excuses.  As I said, I will do a makeup race, and I did hit the treadmill at our gym.  Luckily, one of the amazing ladies from Moms Run This Town Woodbridge/Manassas (seriously, the most supportive people in the world are runners- they cheer you on no matter how slow/short you are in comparison to their time/distance.  Love this group!) was willing to review the race for me! Thank so much Angelica!! 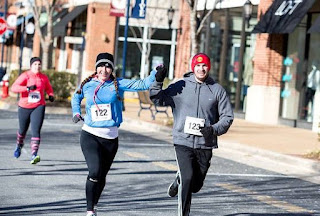 (Not Angelica…I don’t think)
“I did packet pickup the morning of. First you had to check
what your number was on one of the posted lists outside the store, then
the pickup itself was in-store (thank goodness; it was cold outside!).
It was pretty simple- short line, tell them your name/ number, pick up
your number bib, shirt, and chocolate bar (choice of dark or milk
chocolate, woo!). It was pretty convenient- the soiree it’s right near
the start line, convenient to lots of parking, etc.
Because of the cold, the organizers cancelled the water
station. They did say they had vehicles available around the course, so
if anyone started to have trouble breathing because of the cold, or any
other issues, they could locate a course marshal and sit in one of the
cars. They also had a PR Races van driving around the course- I must’ve
seen it at least 4 times as I ran!
There were port-o-potties available not far from the start
line- maybe 80 meters or so. There were maybe 8- about half as many as
the December 5k I ran at the same course.
The start line was a big bunch- the December one had lines
for the different paced people (ie, 8 mm, 9 mm, 10mm, etc); I think they
probably didn’t for this one because there were a lot fewer people. The
race bibs have chips.
Some people dressed up in Valentines Day garb, but most were just trying to keep warm 🙂
The course was a big loop, slight hills. Nothing too steep,
but a surprise if you train on flat surfaces only! All of the course
was paved, main roads, route I’d clearly marked with police or
volunteers at main intersections.
Pictures- I think there was only a photographer at the
finish line (photos available on pr races’ flickr page). The Dec race
had them throughout the course, not sure if this changed due to weather.
Post-race there were tables set up near the finish line with water, bananas, muffins, and heart cookies.
For this race, they cancelled the awards ceremony and
handed out awards as people came through- again, change was due to the
weather. Results were posted on their page later in the day.
And overall- good race, well organized. They sent a few emails with info
on changes, tips on dressing, etc (be on the lookout if your email
automatically puts then in your promo folder, though!). I out would be a
good first race- though maybe not in single digit weather :-)”

If you would like to finish (remember- there’s no time goal, just a finish it goal) the next race with me, you can sign up online here! If you join me for a race, I’ll buy you Starbucks after, too! 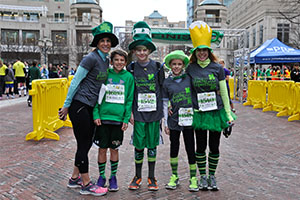 (Also not Angelica, I don’t think)