We were so fortunate to have the opportunity to participate in Wreaths Across America at Arlington National Cemetery on Saturday with my daughter’s American Heritage Girls troop.  I have to be honest and admit that I’ve been going to Arlington my entire life because my grandparents are buried there, but I never knew that the wreaths and flags that appear during Christmas and 4th of July/Veterans Day are put up by volunteers.

Wreaths Across America raises the funds to place wreaths on the graves of American veterans at veterans’ cemeteries across the country, at sea, and 24 national cemeteries on foreign soil.  Quantico is also a participating site.  Wreaths are $15, and our AHG troop actually raised money as a fundraiser, which helped our organization and helped fund the wreaths we would be going to lay.  Arlington actually has to rotate the sections that receive wreaths each year because there are not enough to go around.  This year, there was a bit of a crisis at Arlington because while wreath sponsorships were up overall, they were down at Arlington until a huge last-minute donation from Google.  (Holla at Google!)

Each year, Wreaths Across America selects a date (a Saturday) and all of the cemeteries are provided with wreaths on that day.  Truckers from across the country ship the wreaths to the sites, and volunteers come out to help lay the wreaths.  You don’t have to sign up to volunteer, you can just show up the day of.  Even the tiniest kiddos can help out- as long as they’re big enough to put a wreath down, or hang out in a backpack/wrap/stroller while you do.  Note that strollers looked to be a little difficult to negotiate on the wet ground today, so you might want to plan for an option that’s mud-friendly depending on the weather.

We drove to Pentagon City Mall and parked, and then we took the metro to Arlington.  I actually have a parking pass that lets me into the cemetery grounds, but we were told the line to get into Arlington can be massive with people trying to park in the limited visitors center spots, so we opted to do a short metro ride instead.

So did a lot of people.  Metro was, unfortunately, doing system maintenance on the blue line, so trains were only running every 20 minutes.  They also only have a few entry/exit points at Arlington, so the bottleneck and wait to get OUT of the station was pretty intense.  It took us about 20 minutes, and the trains were standing room only coming in.  I mention this, again, as a caution to those of you with strollers 🙂 It was actually neat that there were so many people coming to volunteer.

Our group met up at 8:30 so they could get good spots for the opening ceremony at 9:30 (Note that times vary by location).  I know I’m going to frustrate someone by saying this, but I didn’t find the opening ceremony all that worthwhile.  It was standing room only, so my daughter couldn’t see and just wanted to get to the business at hand.  There were a few speeches, a non-sectarian prayer, the national anthem, mention of dignitaries, and then God Bless America, oh, and the Presidential Helicopter did a fly-by.  It just didn’t really do anything for me.

By the time we were done with the opening ceremony, people who skipped it (I venture to say the majority) had already been putting wreaths down for a few minutes, so my daughter and I opted out of a group photo and hi-tailed it to the section my grandparents are in so that we could place their wreath.  If you have a loved one in any section, you can lay a wreath for them, and you are able to skip the line at the trucks, walk to the front and ask for a wreath for a loved one. No one will give you any trouble, and in fact, the Army volunteer who gave us our wreath thanked me for my grandfather’s service to our country and thanked my daughter for coming out.  (I found that moving- I teared up a little). 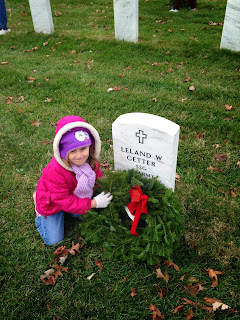 That’s my grandfather’s stone- my grandmother is listed on the back.  Not related to this story- but she was Anna and my daughter is Savannah in her honor.

We were actually able to lay numerous wreaths because we walked back to their section.  The lines can be incredibly long at the sections closest to the entrance, and in the newest sections.  Section 60 had a line a block long.  I know a few of our friends only made it through their lines once or twice, but we actually were able to go through our line six times, getting two or three wreaths each time, depending on whether Savannah felt like carrying her own wreath or not.  They got heavy for her after awhile!

Several of our friends sponsored wreaths, and she was very thoughtful in placing wreaths for them, finding someone who had a name that started with the same first initial as one friend who donated, and finding “USMC” on stones for Marine friends who sponsored others.  Because we’re an interfaith family, it was a little hard for her to understand why we weren’t giving wreaths to everyone (because Daddy is Jewish and he does Christmas with us), and it’s a little hard to explain that we ARE being fair to everyone by honoring their traditions, even if it seems unfair that “everyone isn’t getting one”.  However, after a talking for awhile, she finally got it, and we did make a point of stopping at graves marked with a Star of David and reading the names and inscriptions as a way of honoring those veterans, too.  One of my favorite things about Arlington is the beauty of all the white stones, all the different ranks, branches, and faiths, all together peacefully at rest.  I hope that she understood a little of that, although I know it’s a big concept for a Kindergartner! 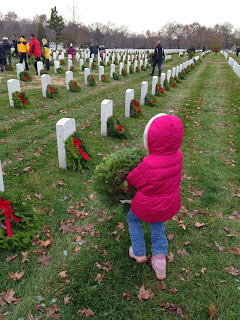 There is a closing ceremony at the Tomb of the Unknowns at noon, which I hear was very beautiful, but Savannah was exhausted, so we opted to head back home at around 11.

If you would like to get involved with Wreaths Across America, you can visit their website to sponsor wreaths or find volunteer information for next year’s wreath placement.  You can also get involved this year by helping to remove wreaths, clean up at Arlington takes place in January, and you can email the site leader for details or to get involved.  I hear that clean-up is not nearly as well attended, and it would still be a very easy job for even little hands.

Did you attend, or have you attended in the past? Leave your tips or advice in the comments.