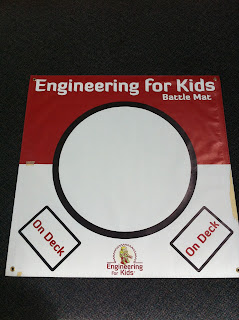 For those of you that won spots to our Engineering for Kids Meetup, I hope that your children had as much fun as mine did!  I have to admit that I had some initial misgivings about the ability of a 20 child class to work with kids ranging from Kindergarten to Teen, but the class was fantastic, and my own children were informing me that they’re having Robotics Parties for their birthdays before the class had even finished. 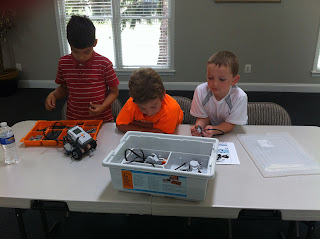 I got a little giggle out of the fact that the kids seemed to gravitate towards their own age groups.  We had the youngest guys together, the oldest guys together, and even three of the four girls that came made up a team.  Everyone seemed to find a buddy.  I asked about whether there’d be an advantage for the older children, but the teachers, who were both fantastic, assured me that sometimes kids who over-engineer are actually at a disadvantage when it comes to battling the robots. The kids worked with Lego Mindstorm Sumo Robots, which came with a basic central unit that they added wheels and appendages onto. 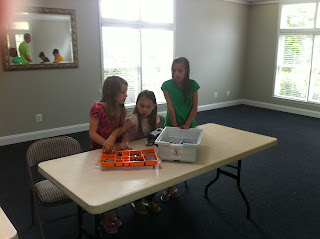 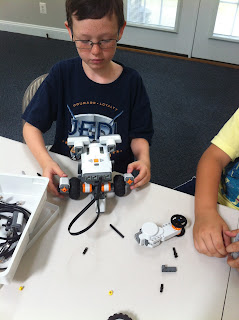 There was quite a bit of learning going on.  The Engineering for Kids team was sure to introduce the engineering procedure, introducing a problem, thinking about a solution, building, testing, and then addressing any new problems based on testing.  They were fantastic about engaging the kids and listening to their questions/concerns but not spoon-feeding them information.  I know that is a really difficult skill to achieve, so I was very impressed! When they got questions like “Will this work?” they answered “How do you think you could test it to see if it does?”.  The staff was truly fantastic, working the room quietly and efficiently to make sure questions were answered and all team members were included without doing the work for the kids or altering their thought process.  They also helped the kids to link their robots up to the computer so they could upload the program that made the robots work on the battle mat. 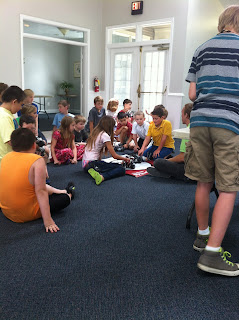 During the 2 hour workshop, the kids were able to “battle” in brackets twice.  It was so interesting to see the different approaches kids took- from “hammers” to “arms” to really basic designs, it was so neat to watch as the various designs worked, or didn’t work! I especially liked seeing the second battle, because the kids all did such a great job addressing any design flaws.  I know it was really hard for all of them to leave pieces that fell off during battle (no re-builds during competition!) but all their robots did a great job!  In the end, the teachers were right and our youngest trio of builders ended up beating our oldest trio in the last battle!

Watching everyone work together and designing and redesigning was so cool.  There were so many learning experiences and lifeskills happening all at once! The teamwork, though process, and even the engineering process was incredible to watch.  I think that as an after-school program this would be second to none for kids of any age- they have robots for Preschoolers and up!  My kids are also incredibly excited that they offer parties (birthdays, scouts, etc), as I already mentioned.  If you weren’t able to make this meet up (I know I could have given away hundreds of spots for all the interested kids!!) there’s also camp this summer being run by Engineering for Kids. Be sure to click the link and check out all of the great themes and weeks being offered!!