Gina from Cheers has been inviting me out for some time to check out their studio- but to be honest, I’ve been avoiding it because I have zero artistic talent.

Maybe negative zero.  Can you have that?

Anyhow, we were near each other at the Bumps, Babies, and Beyond Expo and she invited me to come for their first “Date Night” this past Friday, and since there was nothing on the calendar, I said yes.  I figured worst case scenario, my husband and I could make fun of each other’s total lack of talent in the painting department.  Don’t get me wrong- if you need a room painted in one solid color, my husband is a boss- but painting anything else? Probably no.

But then, the strangest thing happened.  We had a ton of fun, and it turns out we don’t suck nearly as much as we thought we did!

Let’s back up.  Cheers is a “fun evening out” venue in Woodbridge off Minnieville Road.  You can bring your own libations and snacks, and an art teacher takes you through a prepared project.  I found individual Tiramisu and Wine Juice Boxes.  I am not really a drinker- and these were gross.  I don’t recommend them.  (Or maybe that’s just me not being a wine drinker) The tiramisu was good. 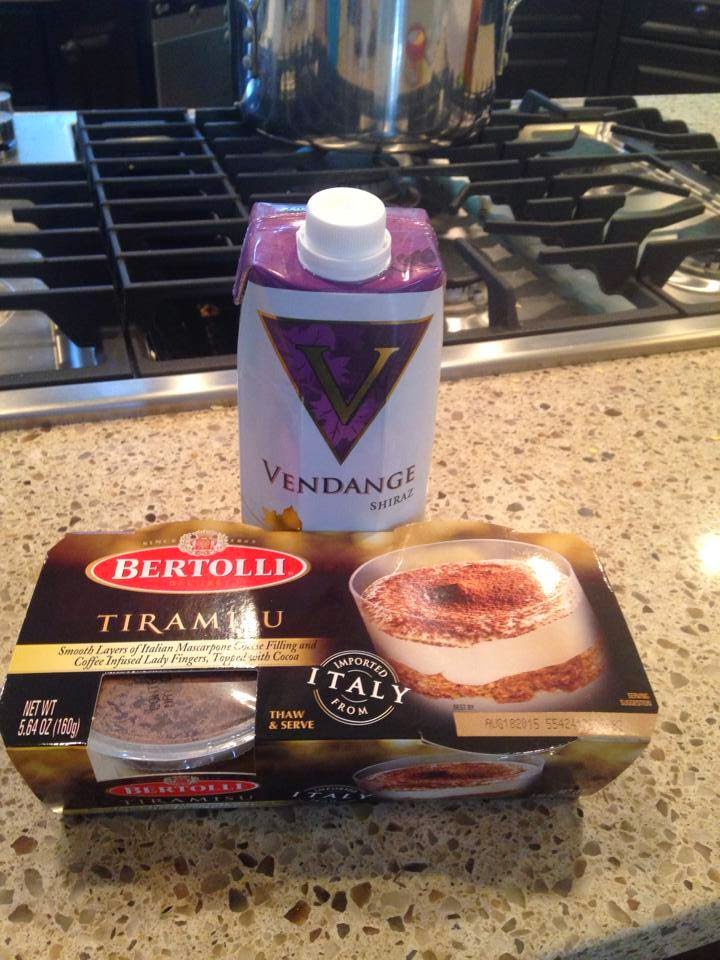 On the night we went, we were making two love birds sitting on a branch.  The sample project was daytime, but the teacher went on to demo an evening scene for those of us who needed different colors for our houses- which is what we went with. The people sitting near us were really nice, and incidentally, our friends showed up (totally unplanned!) so that was fun, too! First we did some swirly colors.  I was really good at this part.  Light in the center, dark on the outside.  The good news is, if you accidentally get some red or some green in your brush, people think you were being artsy! Just go with it! Don’t tell them you’re, in fact, a giant klutz! 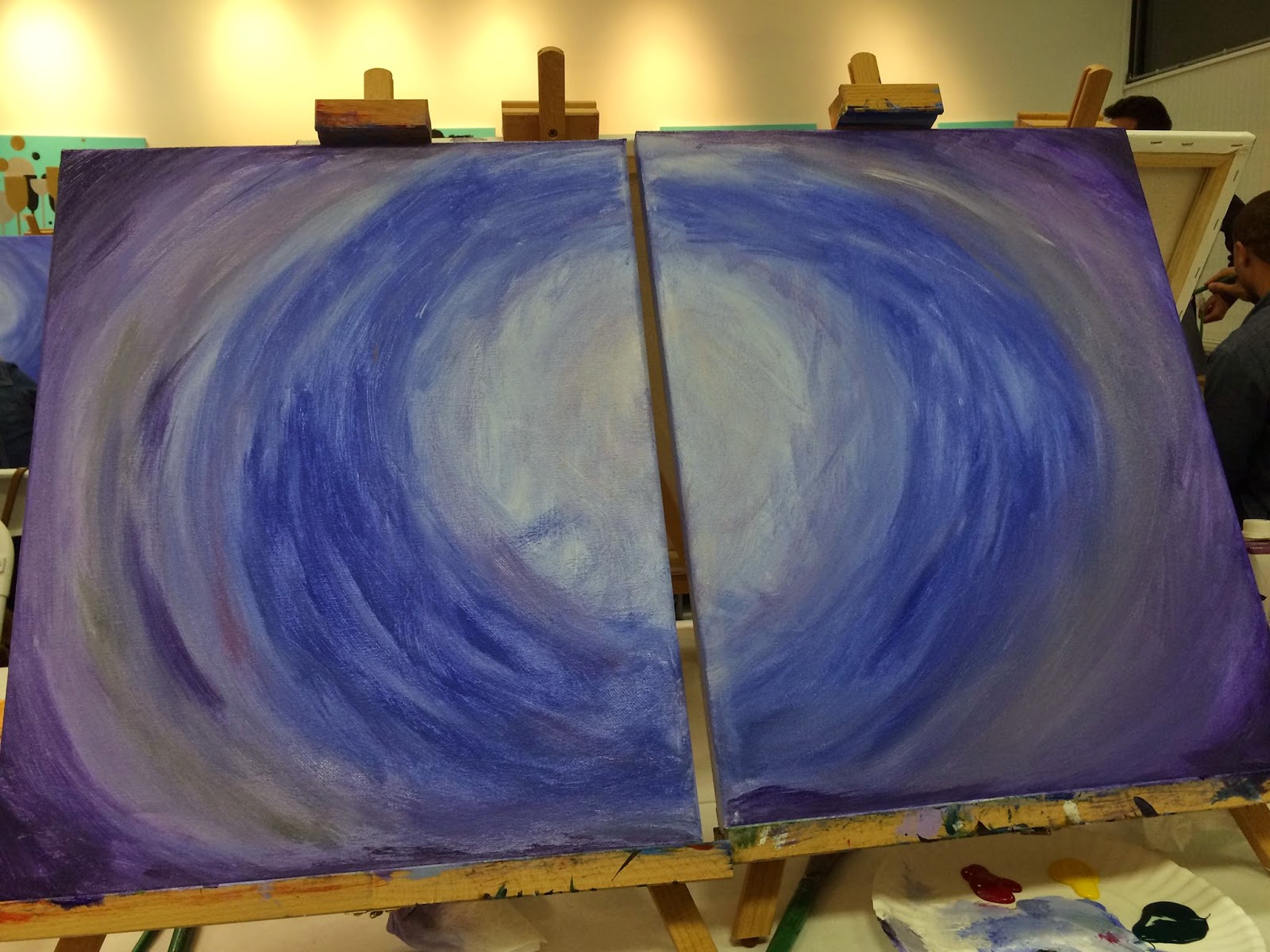 Next we made birds.  There was a trick! We made ovals, filled them in, and then put the brush flat on the canvas and swirled it around itself to make the head.  #EvenICanDoThat 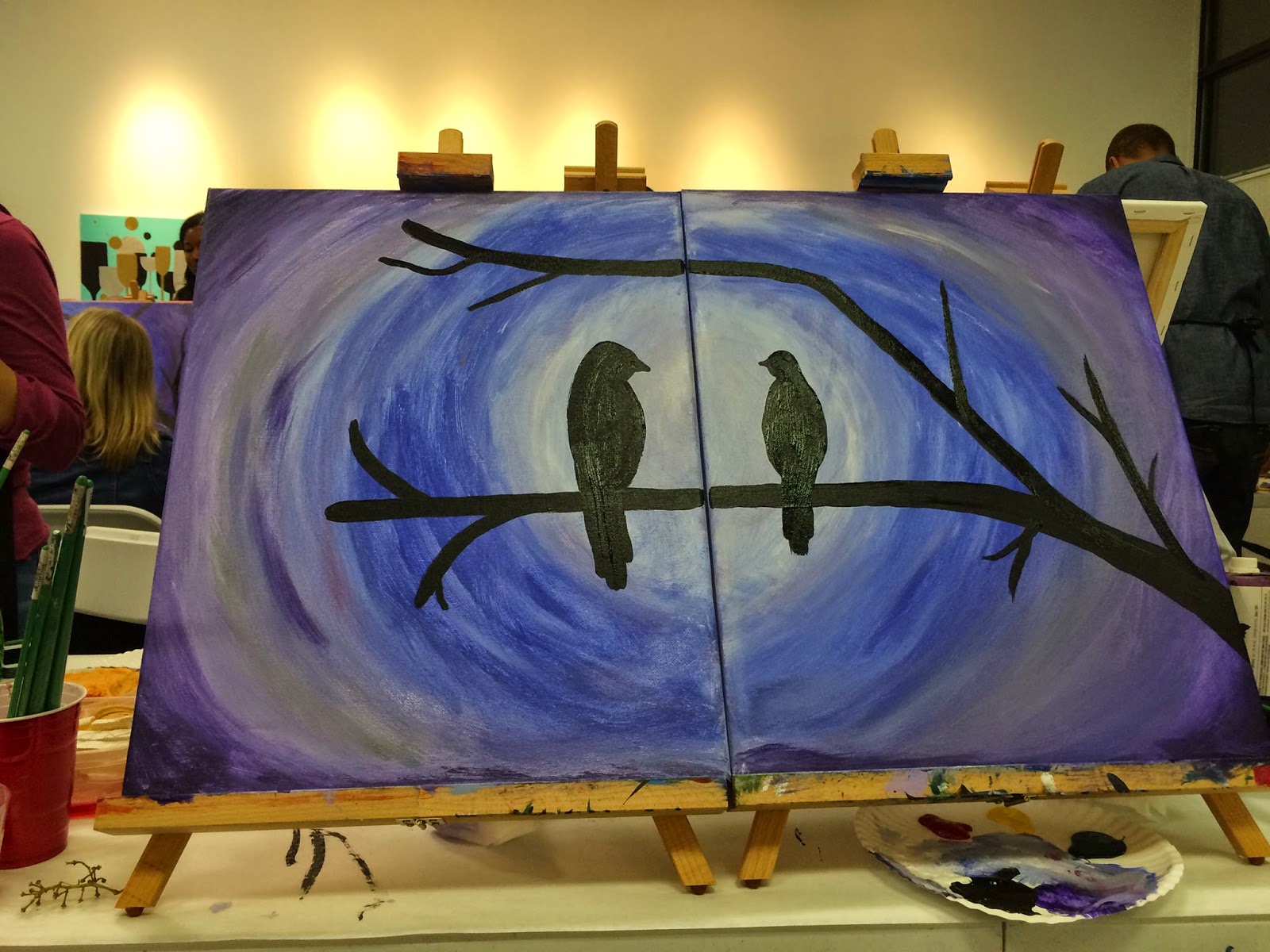 So here’s where it started to get a little dicey.  I happen to like following directions.  My husband, however, wanted to be all innovative and do squares instead of circles.  I wanted to get an attitude about the fact that our finished product wasn’t going to look like the teacher’s (and therefore was not going to be winning), so I just sat back and let him go with the squares.  If I’d been making my own, I would have copied EXACTLY because that’s how you DO it. 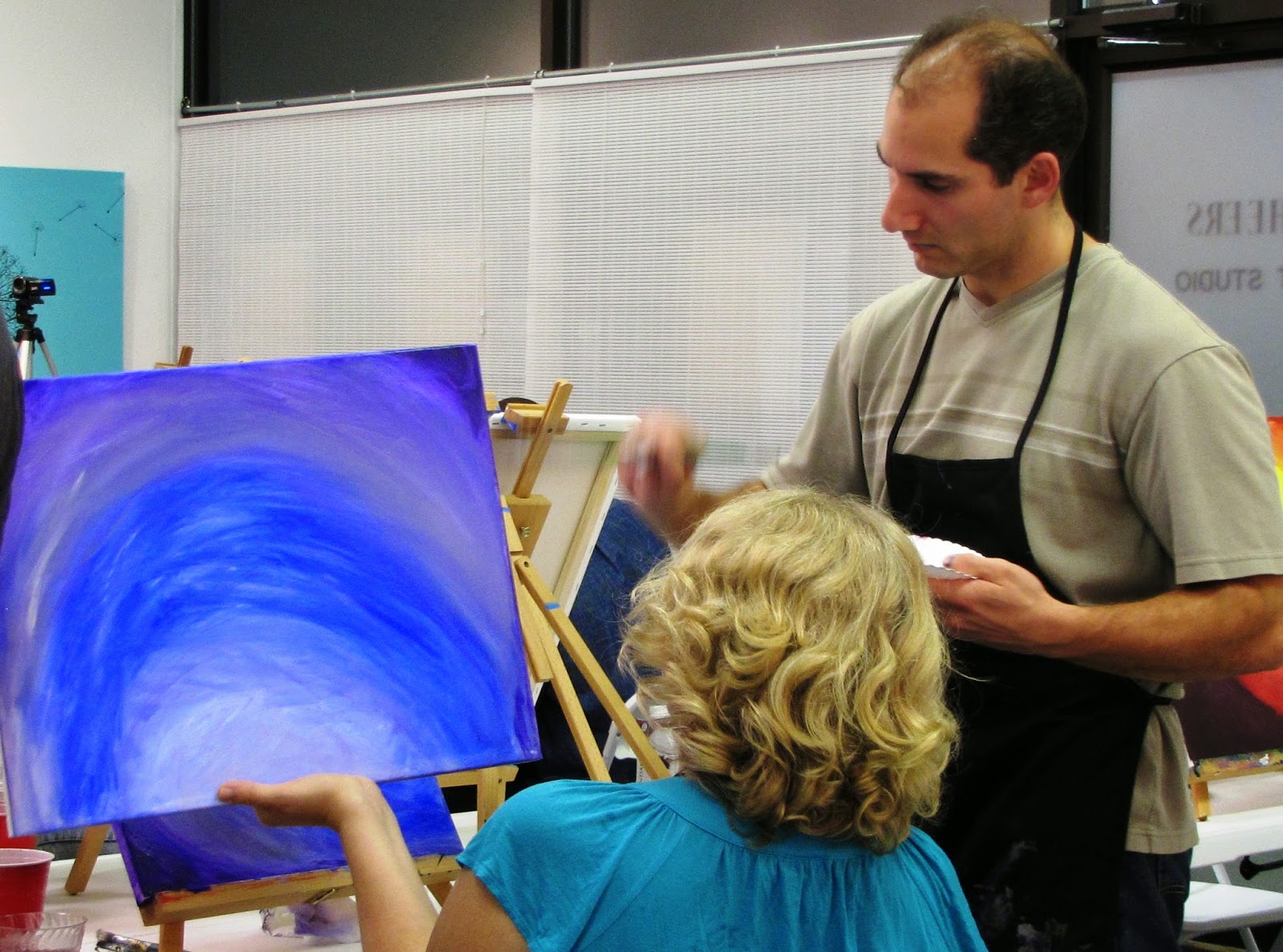 I drag this poor man out to more weird stuff than is fair, so the least I could do was let him do the squares.  Then he abandoned me to take a work call, so I added some color to each square and decided it was okay since everyone else was like “Wow, squares!!” I assume they were doing that to be nice, but I am pretending it’s because it looks good. 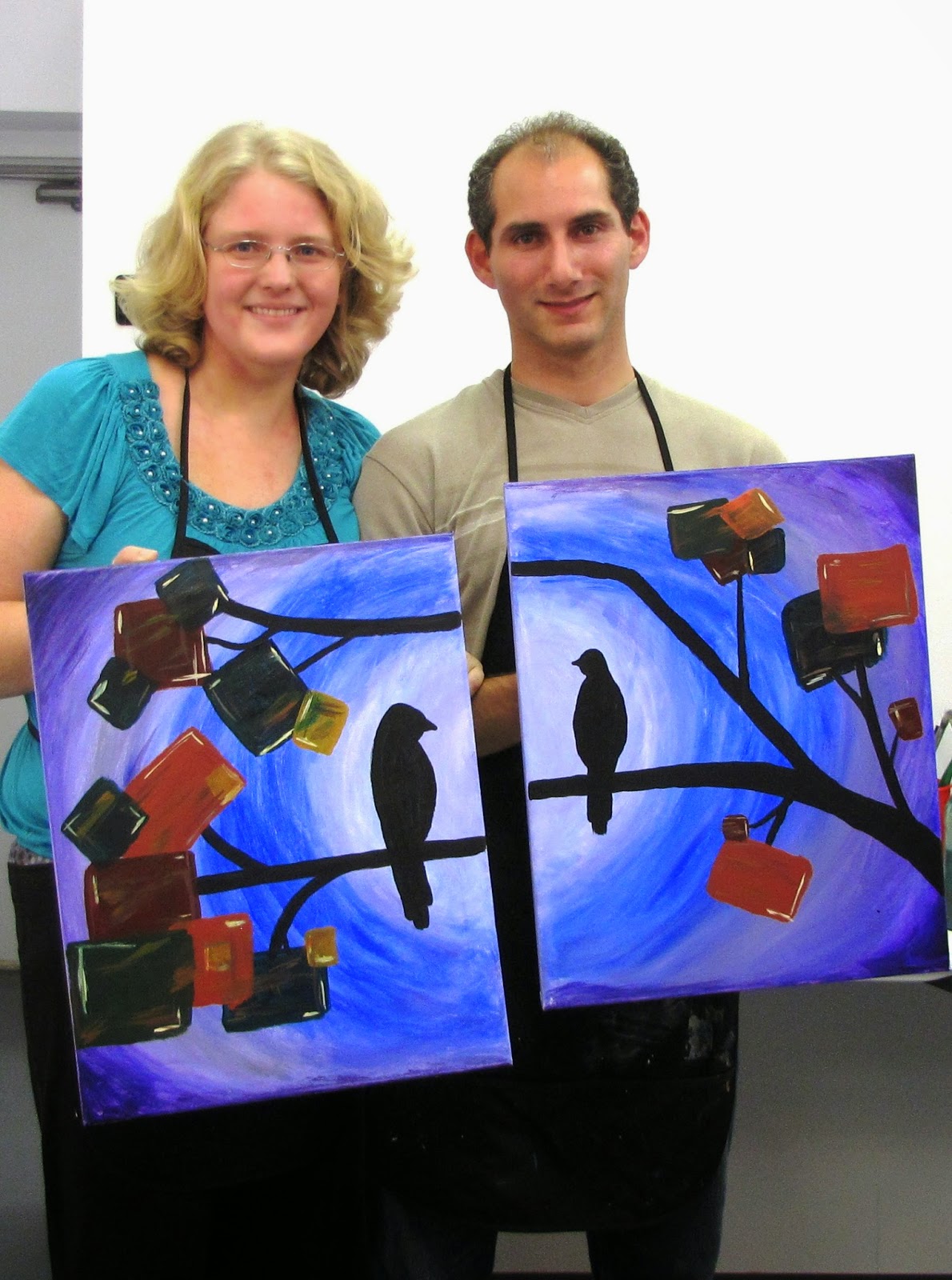 In the end, we totally had fun.  We were even both impressed with our ability to make swirly colors and birds.  I’m not saying we’re going to quit our day jobs, but it turned out pretty good considering the source (namely, two un-talented people!). I think we’d actually both really like to do it again- which is really surprising because this is not our thing.  I’d get my own canvas, though, so that I can copy the teacher exactly, because that’s the kind of kid I am.  If you like to work cooperatively, that’s perfect for date night…but if you’re a little more independent, there’s lots of individual options, too!    There was lots of laughing going on, and everyone seemed to have a good time. 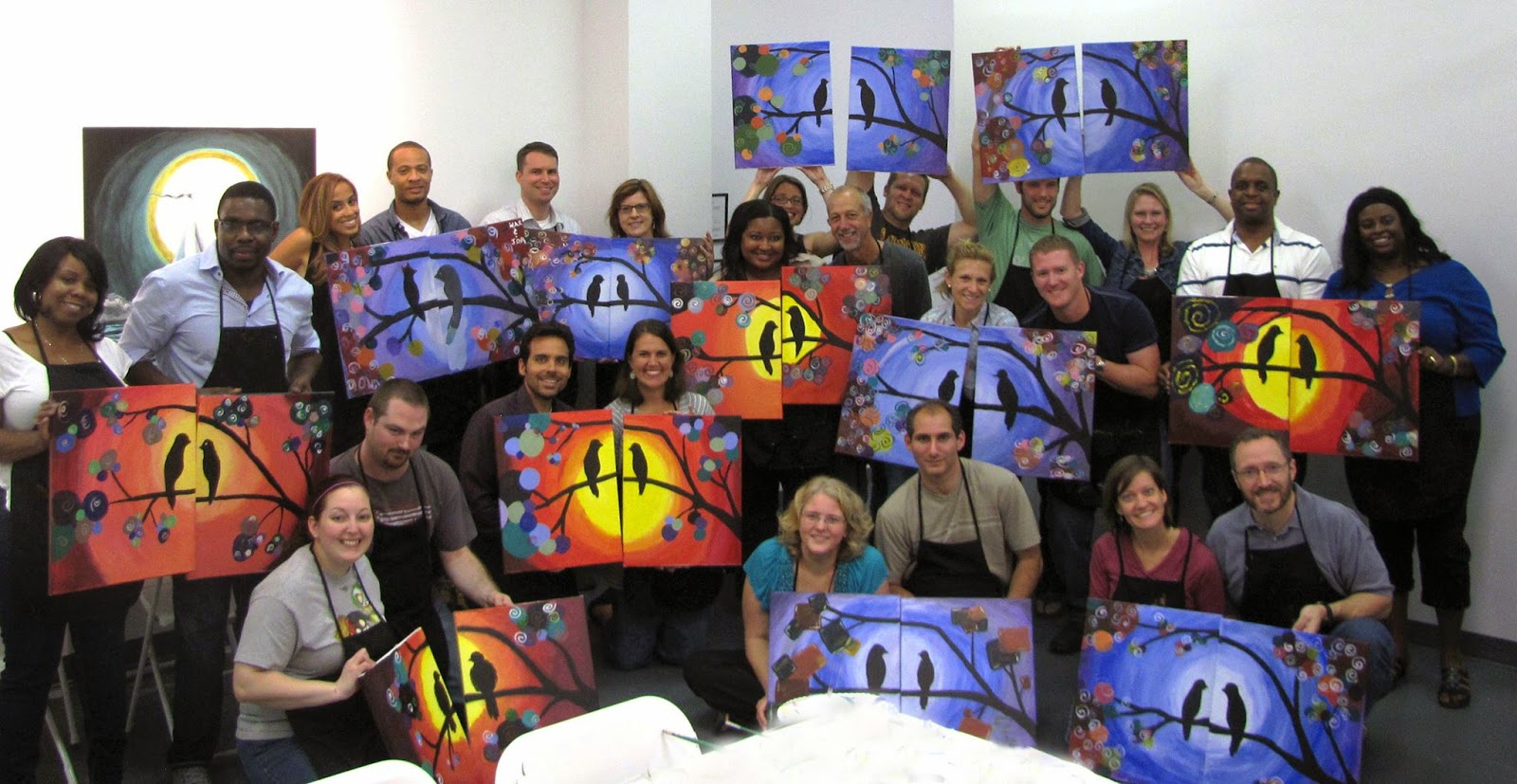 Ultimately, everyone’s seemed pretty happy in the end 🙂 A lovely way to spend a Friday night with my favorite guy in the world.
For more information about Cheers, and to see their upcoming projects, visit their website or their Facebook page.
Thanks to Cheers for having us come out! While our session was gifted to us, all opinions, including those about wine in a juice box, are my own.  As always when I’m talking about date night, make sure you use a designated driver.