Check out Joseph and the Amazing Technicolor Dreamcoat at CCA

Update: We were able to attend the show last night (April 15th) and it was just a ton of fun.  On Facebook I said that it was a lot like having your friends put on a show and including a bunch of their favorite inside jokes- except that in this case your friends were quite talented and their jokes were all actually funny.  The narrator is incredibly talented (this play is ENTIRELY song- there’s not dialogue at all) and so are her assistants.  What my kids liked most, however, was the humor.  They’ve already decided they would be a fantastic 3-person camel for Halloween, and I thought my boys were going to fall out of their seats laughing when some of the brothers started beat boxing and singing “Bad Boys, Bad Boys” from Cops. 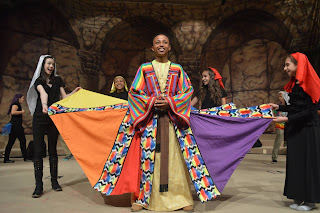 The students definitely took a few liberties with historical accuracy, but we really enjoyed the fun, easy-going atmosphere of the play and the extent to which the characters interacted with the audience, whether they were playing up a joke or running laps around the audience.  Also popular with my kids were Pharaoh Elvis and the fact that Jacob was in a wheelchair, which they thought added a lot of credibility to him being old.  Unfortunately, Jacob was also in an air cast, so I think this was more necessity than creative costume decision, but the kids liked it anyway.
The set was beautifully done and very well used, and overall we thought the show was great! We had a lot of fun.  If there was a downside, I would say it was some microphone issues, but the crew was displaying the lyrics to each song on large screens that flank the stage, so even if you couldn’t hear perfectly, you could still follow the whole story.  We went opening night, though, so I’d imagine they’ll have those kinks worked out tonight!! This was definitely the most fun high school performance I’ve ever been to, and I loved how they utilized the whole school in some way- from the Elementary schoolers up through high school.  Just a heads up, they did open with a prayer and end with an altar call (just so you know it’s coming).  It’s a story based on the Bible, though, so I don’t think that was a shocker for most of the crowd. 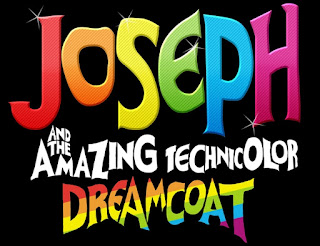 On
April 15th and 16th , Christ Chapel Academy’s (CCA)
Performing Fine Arts Department will put on their rendition of a famous
biblical story:  Joseph and the Amazing Technicolor Dreamcoat.  The student led play will begin at 7pm
each night.
The
biblical story of Joseph is a familiar one to many.  Andrew Lloyd Webber and Tim Rice musicalize
the Biblical story of the young man whose brothers are jealous of their
father’s favoritism toward him and the beautiful coat he receives as a gift.
They sell him into slavery in Egypt, telling their father he has been murdered,
but he ultimately becomes important to the Pharaoh through his ability to
interpret dreams. This bible story is put to 24 catchy songs complete with
choreographed dance and song.
The
play is produced and directed by CCA Performing Fine Arts Instructor, Harmony
Barbour and student directed by CCA Students Michael Carpenter and Bria
Alston.
Tickets
are on sale in the main school office and will be sold at the door.  Prices are as follows:
$3
Children |  $5 Adults  | $15 Family (3 students or more)
About
Christ Chapel Academy
Christ Chapel Academy is dedicated to unleashing the
leadership potential within each student.
Academically rigorous programs, a vibrant christ-centered community, and
a unique
multicultural learning environment make CCA a great option for parents who want a smaller school but don’t
want to sacrifice big opportunities for their student(s).
To learn more about Christ Chapel Academy, visit www.christchapelacademy.org