I hope everyone enjoyed their Halloween! Whether you celebrate by going out trick-or-treating, staying in and having a family night, or going to an event, I hope that it was a good night for you and your family.  We had fun around our neighborhood and my parent’s neighborhood (because grammy needs to show off the grandkids).  In fact, my parents neighborhood was extra awesome this year because they had an ACTUAL man on an ACTUAL horse with an ACTUAL sword dressed up as the headless horseman.

I’m not going to lie, he scared the bejeebus out of me. 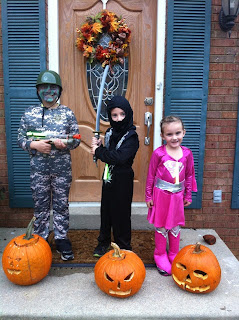 Here are my little trick-or-treaters this year.  We had an army man (bonus mom points for making camouflage makeup using nothing but eye shadow), a ninja, and Supergirl- which isn’t so much a costume as a statement of fact. 😉

Every year after Halloween, even though we have fun, I have to contend with the hard truth that I have turned into a crochety old lady.  Why, you ask?  Because there is a candy system at my house:

Ages 0-12 months old—> sorry parents, but in an effort to be nice to the non-candy eaters, I actually stock up on Halloween goldfish or teddy grahams in individual packets.  Most parents of children who can eat already actually appreciate the gesture.

Adults (seriously?) not in costume/the moms who are “trick or treating for my kids who are too old to go” (there were two of them, and, seriously?)—>one lollipop

I’m sure that some of you are probably still nice people who give equal candy to both the young and old, the costumed and uncostumed, but it makes me sad that the average age of trick-or-treater in our neighborhood was probably 16 last night and there were just giant groups of older teens and several random adults out without children with them.  It’s probably some kind of Freudian anger about the fact that my mom cut me off before I was a teenager, but I at least want to see you in a costume!

At least I’m not walloping anyone with my cane yet 😉

Hope you had a Happy Halloween!